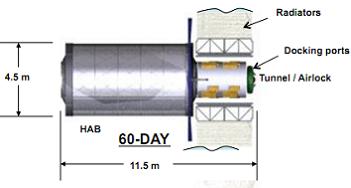 With preliminary design work underway on the Deep Space Habitat (DSH) for future crewed exploration of the space beyond Low Earth Orbit, the configurations of the proposed craft, as well as its auxiliary support craft, are beginning to take shape as NASA eyes a multi-use approach for the aggregate vehicle that would be tasked with actually carrying humans into “deep space.”

Part 2: The basic design for 60-day missions of the DSH:

Following the guidelines set forth by the Advanced Exploration System (AES), the DSH will be based on existing International Space Station (ISS) and Shuttle logistics/utilization modular designs – most notably the ISS’s U.S. “Destiny” lab and the Space Shuttle’s ISS-support MPLMs (Multi-Purpose Logistics Modules).

In what is expected, at this point, to be its debut configuration, the DSH will consist of the ISS lab-derived HAB module, tunnel/airlock, docking ports, solar arrays derived from the MPCV (Multi-Purpose Crew Vehicle) Orion, and radiators.

With these components, this version of the DSH would be 11.5 meters in length and 4.5 meters in width – giving the craft the capability to support a maximum crew size of four individuals.

Inside the HAB module, at the end of the HAB farthest from the tunnel/airlock, would be four crew quarters. 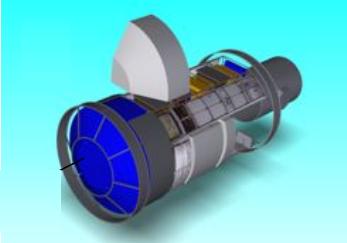 According to the Deep Space Habitat Configurations presentation from the AES, (available for download on L2 – Link), the DSH would provide a crew of four “Large crew quarters with no through traffic at quiet end of module.

These crew quarters will also provide the crew with radiation and storm shelter protection during Solar Particle Events (SPEs) as well as a place to relax when off duty. 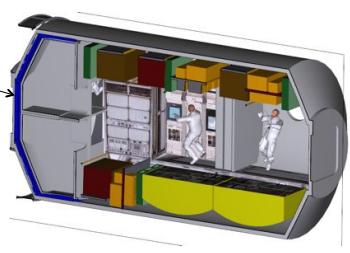 Aside from living quarters, storage areas, science stations, an ECLSS and associate subsystems, and a galley for food preparation will also be accommodated in the DSH HAB module.

The galley will be an “Open area to accommodate all 4 crew and restraints for food and crew for one meal together per day.”

The crew will have an open area for food preparation as well as a microwave and refrigerator for food heating and storage, respectively.

The open area will also provide opportunities for the crew to exercise. Exercise times and meal times would be scheduled so that they do not conflict with one another.

Likewise, the open area will also serve as a wardroom for meetings or off-duty time recreation/window gazing. 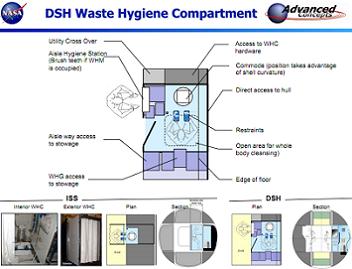 Moreover, the DSH HAB will also include a new, larger, and upgraded Waste Hygiene Compartment (WHC).

The WHC will be larger than the one currently in orbit aboard the International Space Station – larger in part because of lessons-learned from over a decade of continuous crew habitation on the ISS.

The DSH’s WHC will contain a separate Aisle Hygiene Station (AHS) to allow crewmembers to brush their teeth when the WHC is occupied.

The interior of the WHC will also feature a redesigned space from what is currently on the ISS, a redesign that will “take advantage of the shell curvature” of the DSH HAB module.

Furthermore, the larger space will allow for an open area for “whole body cleansing.”

The basic design for 500-day missions of the DSH:

Comparatively, the 500-day configuration of the DSH will consist of an ISS lab-derived HAB module, radiators, solar arrays, a tunnel/airlock adapter connecting to an MPLM with a docking port for the Orion MPCV. 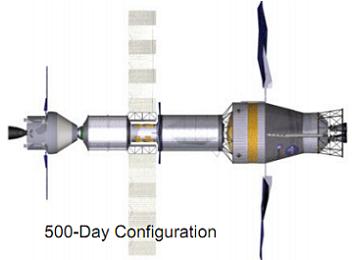 This configuration will be 18 meters long and 4.5 meters wide. 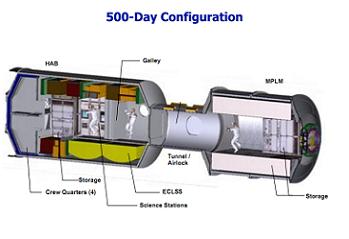 The HAB module will consist of four crew quarters, storage locations, a galley/exercise room/wardroom, a WHC, the ECLSS, and science stations.

The tunnel, which will connect the HAB to the MPLM, will contain a separate airlock/hatch for EVAs or attached service/support vehicle(s).

Notably, very few mass properties in terms of crew systems will change between the 60- and 500-day versions of the DSH craft. 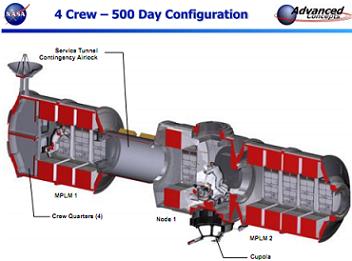 Personal provision weight increases from 80 kg to 100 kg between the two versions. Housekeeping expendables increase from 20 kg to 166 kg, operational spares from 100 kg to 175 kg, maintenance equipment from 40 kg to 80 kg, and EVA provisions from 30 kg to 60 kg.

As expected, much of the mass increase from the 60-day to 500-day version of the DSH (excluding the actual dry mass of the MPLM itself) comes from the ECLSS, which more than doubles in mass from 6,603 kg to 15,239 kg (including expendables). 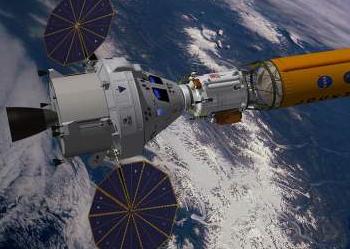 The first and foremost auxiliary support craft for DSH’s crew will be the Orion MPCV.

With a habitable volume of 19.6 meters cubed, the MPCV will have an active crewed duration of 21.1 days and a quiescent duration of 400 days.

Carrying a Delta-V requirement of 1,453 m/s, the MPCV will carry a three to four person crew from LEO (Low Earth Orbit) to the Earth-Moon L1 (Lagrange point 1), where the DSH will be waiting.

At the end of a DSH mission, the MPCV will carry the crew back to Earth for a water landing. 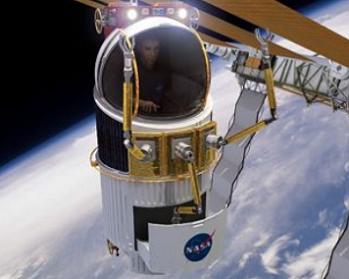 Aside from the MPCV, the first of the new proposed support craft for DSH is the FlexCraft.

According the DSH presentation, the FlexCraft “is a single-person spacecraft designed for servicing /exploration of ISS, NEOs and satellites. It can be piloted or tele-operated.”

The FlexCraft will use the same atmosphere of its host craft.

“Using the same atmosphere as the host vehicle provides immediate access to space without pre-breathing or airlock,” notes the presentation. “Integral propulsion enables rapid translation to the work site. It is sized for all crew working shirt sleeve operating conventional displays and controls.”

With a pressurized volume of just 0.62 meters cubed, the FlexCraft is meant for only one person with an “excursion time” of less than 8hrs.

Its propellant will be gaseous nitrogen, GN2, and it will have a Delta-V of 21 m/s – and its total gross mass is projected at 452 kg.

Its one already-identified limitation will be that it cannot be used during Solar Particle Events. 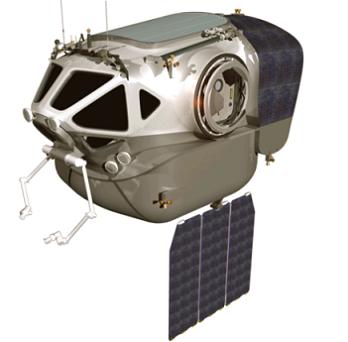 The second auxiliary/support craft mentioned in the DSH presentation is the MMSEV, Multi-Mission Science Exploration Vehicle.

“The MMSEV is configured as a destination servicing/exploration system for short term mission durations with the capability to support EVAs from the two suitports and has a grappling/docking system,” notes the DSH presentation.

The MMSEV will provide “pressurized volume and logistics to support 28 crew days and will Support one – or two-person – EVAs via suit ports.”

To this end, the MMSEV will have a proposed pressurized volume of 12 meters cubed, with 10.8 meters cubed of that set aside for habitable volume.

It will be capable of carrying a maximum crew of four persons, though nominal missions would use only two or three crew.

Its propellants will be hydrazine-mono, and it will be capable of providing 150m/s Delta-V.