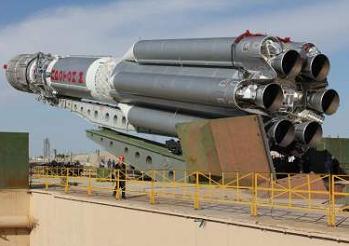 International Launch Services (ILS) have launched their Proton-M rocket, the third global launch of what has been a very busy Thursday. Lift off from the Baikonur Cosmodrome in Kazakhstan was on schedule at 19:12 GMT, with the Proton’s Briz-M Upper Stage then tasked with deploying the large telecommunications satellite after nine hours of flight.
Proton M Launch:

The flight was utilizing a 5-burn Breeze M mission design, with the first three stages of the Proton using a standard ascent profile to place the orbital unit, consisting of the Breeze M upper stage and the Nimiq 6 satellite, into a sub-orbital trajectory.

Separation of the Nimiq 6 satellite was scheduled to occur approximately 9 hours, 14 minutes after liftoff – an event classed by ILS as successful. 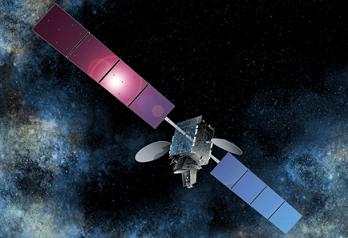 “ILS has a longstanding history with Telesat beginning with the first ILS Proton launch of Nimiq 1 over ten years ago, Canada’s first direct broadcast digital TV satellite,” noted ILS president Frank McKenna after the launch contract was awarded to ILS.

“Having just launched Nimiq 5 for Telesat last fall, ILS and Khrunichev are honored to have the opportunity to again work with the Telesat and Space Systems/Loral teams on the Nimiq 6 program.”

The Space Systems/Loral satellite was built on 1300 platform and has a mass of 4,500 kg. The spacecraft sports 32 High Powered Ku-Band Transponders and has a design Life of 15 years.

“Since our first Nimiq satellite on an ILS Proton, Telesat has counted on ILS to deliver the reliability and on-time performance that have made them an industry leader,” added Dan Goldberg, Telesat’s President and CEO. “We look forward to working closely with ILS, Khrunichev and Space Systems/Loral on the successful launch of Nimiq 6.”

“With the ILS Proton launch of Nimiq 6, ILS Proton has launched all of the Nimiq series satellites built for Telesat. This is an accomplishment we are very proud of and reflects a level of confidence and trust by Telesat in the performance of the ILS Proton vehicle,” added Mr McKenna after the mission.

“Our strong relationship with Telesat spans over 12 years and 8 satellites launched to date. We thank the collective mission teams of ILS, Khrunichev, Telesat and Space Systems/Loral for their outstanding work on the Nimiq 6 launch and look forward to the ILS Proton launch of Anik G1 later this year.”