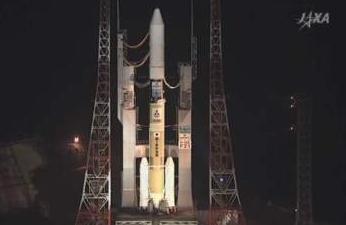 The launch vehicle (F-21) used on Thursday was the 202 version of the H-2A rocket equipped with two solid rocket boosters. The satellites were encapsulated in the “4/4D-LC” type satellite fairing with dimensions of four meters in diameter and 16 meters in height.

Mitsubishi Heavy Industries, Ltd. – as always – was tasked with the role of launch service provider for this H-2A mission.

The H-2A can be launched in various configurations by installing additional solid rocket boosters. Its first stage has a length of 37.2 meters, a diameter of 4 meters and a mass of 114 tons. The stage burns a mixture of liquid oxygen and liquid hydrogen, developing a liftoff thrust of 1,098 kN. Its burning time is of 390 seconds.

The Global Change Observation Mission 1st-Water “SHIZUKU” (GCOM-W1) was developed by the Japan Aerospace Exploration Agency (JAXA) and rode as the lower passenger inside the payload fairing.

JAXA conducted a nickname contest for the GCOM-W1 satellite, receiving 20,998 applications. Among them, “Shizuku” (meaning a “drop”or a “dew”) was suggested by the largest number of people and was selected as the name for the new satellite.

The GCOM mission will enable continuous global-scale observations – for 10 to 15 years – of effective geophysical parameters for elucidating global climate change and water circulation mechanisms, according to JAXA.

GCOM consists of two series of satellites; GCOM-W, for observing water circulation changes and GCOM-C, for climate changes. The GCOM-W, with a microwave radiometer onboard, will observe precipitation, vapor amounts, wind velocity above the ocean, sea water temperature, water levels on land areas, and snow depths. The GCOM-W1 is the first satellite for the GCOM-W series. 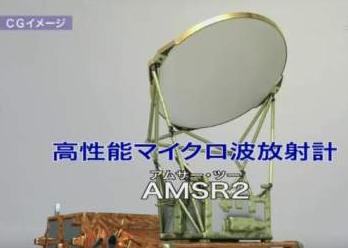 AMSR2 will detect the weak microwaves at an altitude of 700 kilometers and measure their strength with a very high accuracy. By measuring the strength of a microwave emitted from the sea surface with the AMSR2, the water temperature of the sea surface can be measured to an accuracy of 0.5 degrees Celsius.

The antenna of the AMSR2, which receives microwaves from the ground, arc scans the ground surface at a ratio of one turn every 1.5 seconds and observes an area approximately 1,450 kilometers wide in one scan. Using this scanning method, the AMSR2 can observe over 99 percent of the planet in just a two day period.

The diameter of the antenna is around two meters, making it the world’s largest observation sensor aboard a satellite. The height of the rotating element is around 2.7 meters and the weight is in the region of 250 kilograms. The AMSR2 can keep rotating such a large and heavy antenna at a speed of one turn per 1.5 seconds for 24 hours a day and for more than five years. 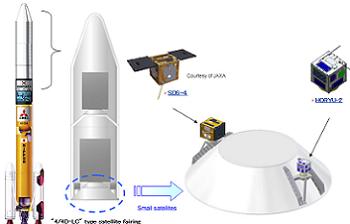 Arirang-3 (Kompsat-3) – developed by the Korea Aerospace Research Institute (KARI) – will be in the upper position inside the payload fairing.

The goal of the KOMPSAT-3 project is to develop and mature the hardware using the technology obtained through the KOMPSAT-1 project and the KOMPSAT-2 project. It aims to meet Korean satellite demand and form a technology infrastructure that will make inroads into the world space industry at a stage when the industry is improving the capability to develop and design highly advanced remote sensing satellites.

It will operate at an altitude of 685 km in a sun-synchronous orbit using a payload capable of submeter class resolution. It is expected to have a four year lifespan.

The mission objectives of the KOMPSAT-3 are meet the needs for high-resolution EO (Electro-Optical) images required for GIS (Geographical Information Systems) and other environmental, agricultural and oceanographic monitoring applications.

These two small satellites – taking advantage of the remaining performance ability of the H-2A – were loaded in the appropriate position of lower compartment together with “SHIZUKU.”