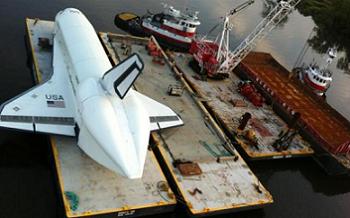 The shuttle orbiter that never flew in space, yet provided the pathfinder operations to allow her more famous sisters to conduct 30 years of space flight, began a barge journey to her retirement home on Sunday. Taking in the sights of New York City’s waterways, Enterprise is heading to the Intrepid Sea, Air and Space Museum. However, she won’t arrive until Wednesday after suffering minor wing damage enroute.

On the day 1000s of boats sailed alongside a special barge called the Spirit of Chartwell down the River Thames in London for Queen Elizabeth II’s Diamond Jubilee celebrations, another barge set sail from JFK Airport with a famous passenger of its own on board.

The journey will take two days, including a stop over at Port Elizabeth, New Jersey, as Enterprise – riding atop of the barge – takes in the sights of Queens and Brooklyn, this time from ground level, following the ferry trip by air over the city.

Enjoying some additional New York City sight-seeing, Enterprise will pass the Gil Hodges Memorial Bridge, pass by Coney Island, glide under the Verrazano Bridge and head to Newark Bay for a layover ahead of the final leg of the journey.

The journey to the Intrepid has been delayed by at least a day after minor damage was suffered to Enterprise, when the edge of her starboard wing was caught on a New York railroad bridge.

The last leg will see the barge and Enterprise will pass through New York Harbor past the Statue of Liberty and the rising buildings of the World Trade Center, prior to sailing up the Hudson River towards the Intrepid, a month after Enterprise first passed over New York City aboard the Shuttle Carrier Aircraft (SCA) that transported her from the Smithsonian.

This final journey has been a long time in the planning, with evaluations starting back in 2010, ensuring Enterprise was in a good condition to make the trip to New York City. 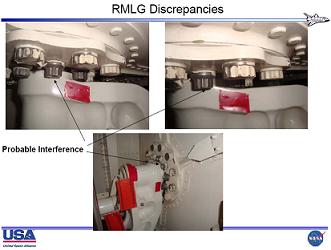 Despite her age, Enterprise was observed to be in good shape, with the biggest problem only relating to the SCA attach point on the orbiter – known as the arrowhead fitting – which was corroded and in need of a repair, along with some discrepancies with her landing gear hardware.

As all the other areas of the vehicle were checked – including via borescope evaluations – mainly showing the craft was in a reasonably good condition considering her years, bar some minor corrosion. The Kennedy Space Center (KSC) team sent to check Enterprise then successfully repaired the arrowhead fitting.

With Discovery arriving to take her place at the world famous exhibition, Enterprise greeted her better known sister, prior to being rolled out to the SCA that had delivered OV-103 to the nation’s capital. 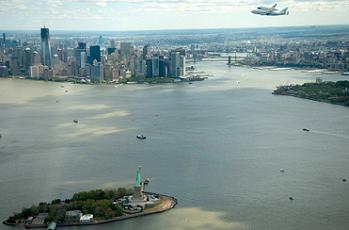 Mated to the SCA for one final trip into the air, something she first did in the late 70s as part of the Approach and Landing Test (ALT) program at NASA’s Dryden Flight Research Facility (DFRC) at Edwards Air Force Base, Enterprise enjoyed a rock star arrival at New York City, flying over famous landmarks such as the Empire State Building and the Statue of Liberty.

Landing at JFK Airport, several weeks of preparations were required ahead of the barge journey to the Intrepid Sea, Air and Space Museum, a famous ship in her own right, docked at Pier 86 in Manhattan at West 46th Street.

A several hour operation will be conducted to lift Enterprise on to the deck of the Intrepid, allowing for preparations to allow the public to visit the shuttle from mid-July.

The Intrepid Sea, Air & Space Museum opened in 1982 and has since welcomed more than 10 million visitors. The museum is centered on the aircraft carrier Intrepid (CVS-11), now a national historic landmark and a popular attraction in New York City. 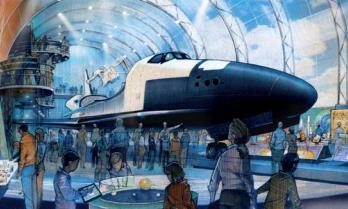 Intrepid was commissioned in 1943 and served proudly in World War II, served three tours of duty off Vietnam and provided submarine surveillance in the North Atlantic during the Cold War.

Interestingly, the exhibition of Enterprise will not be Intrepid’s first experience with NASA, after she served as a primary recovery vessel in the early ’60s for the Mercury and Gemini Programs.

Although Enterprise will be safe on the deck of the Intrepid, work is set to begin to build a housing facility, protecting the shuttle and her visitors from the elements. Looking after Enterprise is a massive responsibility, as acknowledged by Susan Marenoff-Zausner, the Intrepid Museum president.

“Our mission here is to protect it, preserve it and to take care of it. We will take care of it so that the legacy lives on – everything this workforce has worked so hard to achieve will be honored, and their story will be told.”

Follow Enterprise’s journey on the live update thread linked above.

(Images: via L2 content, NASA, and the Intrepid Sea, Air and Space Museum).