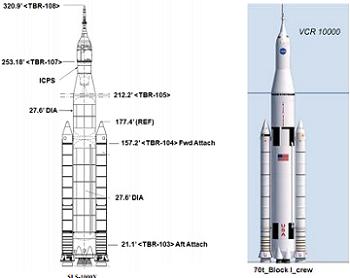 Space Launch System (SLS) teams are over a month into their DAC-2 (Design Analysis Cycle), as they push the Heavy Lift Launch Vehicle (HLV) towards the Preliminary Design Review (PDR) in 2013. During this process, Boeing are also preparing to start actual production of SLS hardware, via the creation of thousands of production drawings that will be used by their machine shops to produce the vehicle’s core stage structure.

NASA’s new “monster rocket” is classed as a requirement for the Agency’s Beyond Earth Orbit (BEO) aspirations, baselined into NASA’s plans via the language of the 2010 Authorization Act that called for a HLV capable of “evolving” into a 130mt launcher.

While this SD HLV design continually won trade studies and evaluations throughout recent years, both before and after the fallout of the FY2011 Budget Proposal, some people claim there are more capable HLV designs – especially when they are not restricted by the 2010 Authorization Act guidelines. Some people also claim a HLV isn’t even required for BEO missions, citing existing launchers and propellant depots as alternatives.

SLS will begin life as a 70mt capable launch vehicle, tasked with a 2017 debut to loft an uncrewed Orion on a mission around the moon. This validation flight is called Exploration Mission -1 (EM-1) and is likely to remain baselined.

The Block 1 SLS configuration will include two possible additions depending on mission requirements: a Cargo Payload Adapter (CPA) for non-crewed payload flights or two possible payload adapters for Orion/MPCV missions with or without an ICPS (Interim Cryogenic Propulsion Stage). For Block 1, the ICPS will be a Delta Cryogenic Second Stage (DCSS).

The Block 1 is also set to fly a second time, with the Exploration Mission -2 (EM-2) mission mimicking EM-1, except this time the mission would be crewed. Current manifest predictions place this mission a whole four years after EM-1. 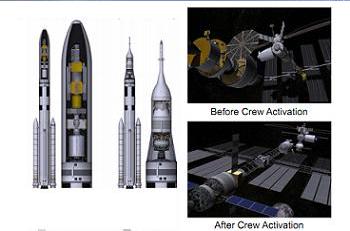 However, with the rise of the Exploration Platform/Gateway plan during ongoing roadmap evaluations, there is a chance the EM-2 mission will be re-manifested, with the potential of a Block 1 “cargo” mission in 2019, directly related to the Platform’s construction, potentially to launch the large Solar Electric Propulsion (SEP) hardware that will send the platform to EML2 on the far side of the Moon.

While those plans are finalized, SLS teams at the Marshall Space Flight Center (MSFC) are deep into their DAC evaluations, a key juncture towards the key Preliminary Design Review (PDR), scheduled for next year.

SLS DAC-2 notes and updates from team members involved in the process (L2 Link) outlined the current state of play, ranging from the Chief Engineer’s Board meeting at the start of May – where one of the agenda items was the DAC-2 Ground rules and Assumptions – through to the very latest in mid-June. 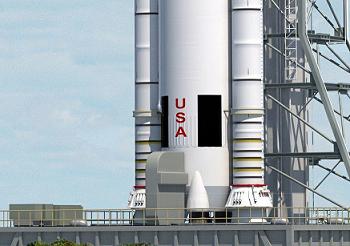 The primary focus of the DAC-2 work is to bring the Block 1 design up to a PDR level of maturity, as this 70mt vehicle baselines its configuration.

The early part of the DAC-2 work is been devoted to gathering input data, checking the data, and doing preliminary runs with the new input data. The input data includes a wide variety of engineering models, such as thrust models for both the RSRMV (Five Seg) boosters and the liquid engines, thermal models, and outer mould line models for aerodynamic analyses.

In order to complete structural loads analyses on the entire SLS vehicle, MSFC structural engineers must collect FEMs from each of the elements (booster, core stage, adapters, fairings and ICPS) and from MPCV (for the Orion spacecraft) and ground systems for the Mobile Launcher to evaluate rollout loads. The delivery of all the FEMs should be completed this month. 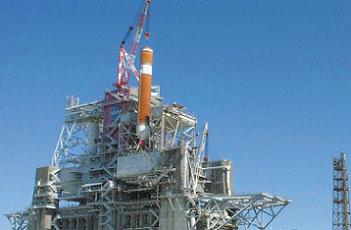 In parallel, the Boeing core stage designers have been working on their production schedule. The core stage schedule calls for the first flight stage to be delivered to NASA’s Stennis Space Center (SSC) in March, 2016 – where it will undergo a Green Run test series consisting of Dynamic Response Testing, one Wet Dress Rehearsal, and two full-duration hot fire tests on the B-2 test stand.

The stage would then be shipped from Stennis to the Kennedy Space Center (KSC) about 7-8 months before it is needed for stacking into the SLS-1 (EM-1) vehicle inside the Vehicle Assembly Building (VAB). This timeline creates over half of year of margin for any potential slips to the schedule.

Based on this timeline, Boeing will need to release their first production drawings – the actual drawings that will be the templates for creating the core stage hardware at the machine shops – as early as August of this year.

While there have been some discussions about potential overlaps between the completion of some of these first production drawings and the completion of the DAC-2 structural loads data – the latter expected in November of this year – it will take around two years for Boeing to complete what is expected to be a jigsaw of 3,500 production drawings for the core stage of the SLS vehicle. 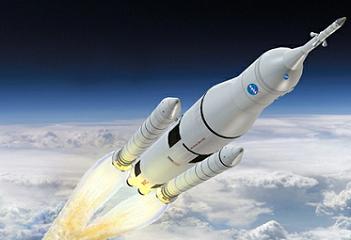 To further reduce the risk of production drawings requiring a rework due to refined structural loads data, MSFC is providing Boeing with their FEMs and other input data so that MSFC and Boeing can work in parallel, starting with the same inputs.

This in turn provides the clear guidance, with Boeing focusing on what they need to produce their drawings, while MSFC will maintain an overall focus on the entire vehicle.

The first actual hardware parts for SLS to come out of the machine shops will go into the LH2 tank Structural Test Article (STA), which is on the SLS critical path, given the STA tanks must be completed and out of the way before the flight tanks can be built.

Notably, the Ares I Upper Stage was still almost a year away from beginning construction on its STA when Constellation was cancelled, a sign the SLS Program is avoiding the numerous design related delays endured by CxP. 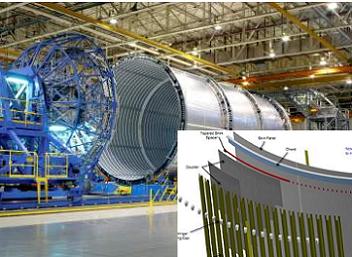 For additional context on the timeline, it used to take three years to build a Space Shuttle External Tank, from the time the individual ET was authorized, until the ET actually rolled out the door at MAF, and that was with the production drawings already in hand and the production line already active.

While the SLS teams’ number one focus is to advance the Block 1 vehicle to PDR – with no more major changes planned for the Block 1 design unless it is absolutely required – sources note they feel they have a “pretty good vehicle for the 2017 launch”, with the DAC-2 completion set to confirm this positivity.

Some members of the SLS Program are also looking to the future SLS configurations, with the 105mt capable SLS set to dominate the 2020s. 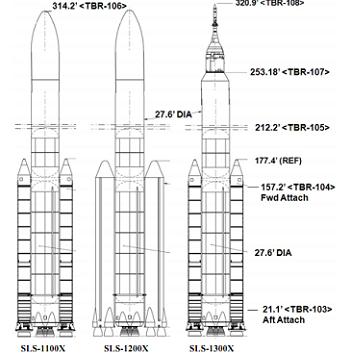 This next vehicle, currently known as the Block 1A, will eventually make use of the advanced boosters – either solid or liquid propellant driven.

However, while SLS configurations with advanced boosters and J-2X based upper stages – Block 1A and Block 2 – will continue be studied during the DAC-2 process by the Advanced Concepts Office to a System Design Review (SDR) level of fidelity, they are not the primary focus of the vehicle development at this time.

Regardless, notes on the L2 SLS section (L2 Link – See DAC-2) have revealed a Block 1B configuration, one that continues to use RSRMV (solid) boosters, an 8.4m core with four RS-25D/E engines, an 8.4m Cryogenic Propulsion Stage with four RL10A-4-2 engines, and either an Orion MPCV or a payload under a 8.4m fairing. This vehicle would also be aiming to launch 105mt to LEO. However, the new stage can perform part of the ascent as well as TLI (Trans Lunar Injection).

The notes add that there are enough RS-25D engines in stock to support four missions, and enough RSRMV material (casings, etc.) to support 10 missions.

Selecting the SLS Block 1B over the Block 1A would result in delaying the advanced boosters until the 2030s, depending on the flight rate that is to be determined by the currently undefined Exploration Roadmap.

Further information on the SLS Block 1B will be outlined in an upcoming article.

(Images: Via NASA, Boeing and L2 content from L2’s SLS specific L2 section, which includes, presentations, videos, graphics and internal – interactive with actual SLS engineers – updates on the SLS and HLV, available on no other site.)