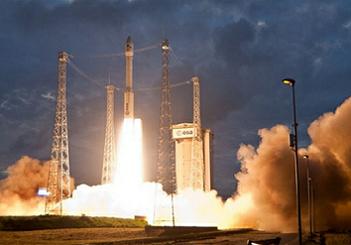 Arianespace have launched their Ariane 5 ECA on a mission to loft two satellites into orbit – namely Meteosat Second Generation-3 (MSG-3) and EchoStar XVII. Launch from the European Spaceport in Kourou, French Guiana was on schedule at the start of a 29 minute launch window that opened at 9:36pm GMT on Wednesday.

As such, Ariane 5 flights carry the “VA” designation, followed by the flight number.  The “V” is for “vol,” the French word for “flight,” while the “A” represents the use of an Ariane launch vehicle.

For this mission, the designation was VA207 – signifying the 207th flight of an Ariane family launcher. It was the third Ariane 5 mission in 2012.

Ariane 5 delivered a payload lift performance of more than 9,600 kg. during the mission, which included a combined total of over 7,500 kg. for the EchoStar XVII and MSG-3 spacecraft, plus the launch vehicle’s dual-passenger dispenser system and satellite integration hardware. 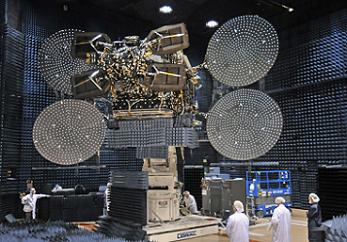 The launch was scheduled for June 19. However, Space Systems/Loral requested additional checks to take place on their spacecraft, causing a slip to July 5.

With a liftoff mass of approximately 2,000 kg., MSG-3 will operate in geostationary orbit after its deployment by Ariane 5, providing highly detailed imagery of Europe, the North Atlantic and Africa for use by meteorologists and national weather forecasters. 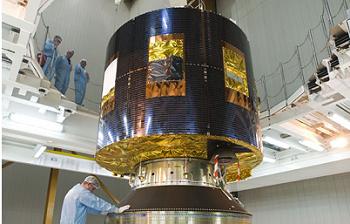 MSG-3 was positioned atop Ariane 5’s core cryogenic stage during activity inside the Spaceport’s launch vehicle Final Assembly Building – placing it as the lower passenger in the dual-payload “stack,” was released second in the flight sequence after its co-passenger, EchoStar XVII.

Arianespace’s mission with MSG-3 marked the ninth Meteosat-series satellite launched by Ariane vehicles from French Guiana since 1981 for operation in geostationary orbit.

A total of six Meteosat First Generation meteorological platforms were orbited on flights performed in June 1981, June 1988, March 1989, March 1991, November 1993, and September 1997.  This was followed by the two second-generation spacecraft deployed in August 2002 and December 2005.

The first in the series of the second-generation spacecraft, MSG-1 – also known as Meteosat-8 – was launched in 2002. MSG-2 followed three years later. Both have been successful in continuing the legacy of the operational meteorological satellites that started with Meteosat-1 in 1977. 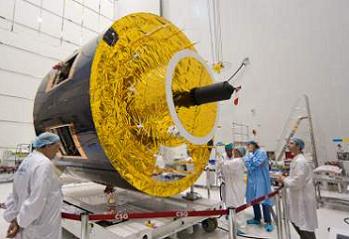 Produced by a Thales Alenia Space-led European consortium, MSG-3 will be operated by EUMETSAT (the European Organisation for the Exploitation of Meteorological Satellites).

The satellite’s primary instrument is the Spinning Enhanced Visible and Infra-red Imager (SEVIRI), which builds images of the Earth’s surface and atmosphere in 12 different wavelengths once every 15 minutes. Four of the 12 SEVIRI channels look at sunlight reflected from the Earth’s surface and clouds, while the remaining eight are designed to monitor thermal infrared wavelengths.

Also carried on MSG-3 is the Geostationary Earth Radiation Budget (GERB) instrument for measurements of radiation originating on Earth from the Sun. The payload is completed by a communications package for the rebroadcast of EUMETSAT data to end users’ ground stations, as well as a search and rescue transponder for the international Cospas-Sarsat program.

This mission follows the May 15 launch of two telecommunications satellites for Asia: JCSAT-13 and VINASAT-2; and the March 23 liftoff with Europe’s third Automated Transfer Vehicle for servicing of the International Space Station (ISS).