Russia’s Progress M-15M spacecraft, designated by NASA as 47P, has successfully re-docked to the International Space Station (ISS) for the second time, following its undocking one week ago. The re-docking results in the successful demonstration of the new Kurs-NA automatic rendezvous system, to be used on future Progress and Soyuz spacecraft.

Progress M-15M/47P launched to the ISS on April 20, with a docking to the ISS at the Docking Compartment-1 (DC-1) “Pirs” port coming two days later on April 22.

After spending three months docked to the ISS, during which time the Progress was emptied of cargo and filled with trash, Progress M-15M undocked from the ISS last Sunday (22 July) in order to conduct a test of a new Kurs system.

Kurs is the system used by Progresses for automated rendezvous and docking with the ISS, with the current version of the well-proven system being Kurs-A. However, in addition to its Kurs-A antennas, Progress M-15M was also fitted with a new antenna system known as Kurs-NA.

While the original Progress M-15M docking to the ISS on April 22 used the traditional Kurs-A, in order to ensure that the Progress’ cargo would not be wasted should the new Kurs-NA system fail, the second docking of Progress M-15M was conducted for the purposes of testing the brand new Kurs-NA system, with the consequences of failure reduced due to the Progress having already offloaded all of its cargo to the ISS.

Kurs-NA uses less power than Kurs-A, and also replaces the function of five existing Kurs-A antennas into one antenna, thus allowing for the removal of four antennas from future Progress and Soyuz spacecraft, which will reduce the risk of a docking failure as the four antennas in question, which are deployed post-launch but retracted prior to docking since they extend forward of the Progress docking interface, will no longer be present.

While the original plan for the Kurs-NA tests was for Progress M-15M re-dock to the ISS roughly one day after its undocking, this plan was scuppered by the failure of the new Kurs-NA shortly after it was activated during the Progress’ first re-rendezvous attempt last Monday (23 July). 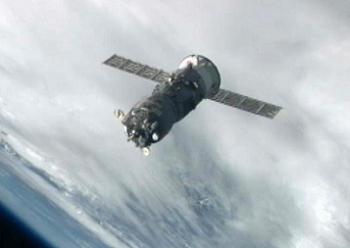 Although the re-rendezvous had already been initiated at the time of the Kurs-NA failure, the ISS was never in any danger, since the failure occurred when the Progress was still 161km away from the ISS, and the Progress was safely sent into a passive abort in a retrograde motion from the ISS.

The Russian flight control teams decided to wait until after the berthing of Japan’s HTV-3 spacecraft to the ISS on 27 July before re-attempting the re-docking, which gave the ground teams time to troubleshoot the Kurs-NA issue.

After numerous unsuccessful attempts to activate the problematic Kurs-NA, Russian engineers eventually discovered that the problem was caused by lower than expected temperatures on Progress M-15M. In an attempt to resolve the issue, engineers turned on all available heaters on Progress M-15M, which kept Progress M-15M at a constant 22 degrees, which in turn resulted in Kurs-NA activating successfully, paving the way for tonight’s docking.

With the activated Kurs-NA successfully locking on to the passive Kurs (Kurs-P) on the ISS, the re-rendezvous, fly-around and docking to the ISS at the DC-1 port under the new Kurs-NA system successfully occurred at around 9:00 PM EDT 28 July/1:00 AM GMT 29 July.

Experienced Russian cosmonauts Gennady Padalka and Yuri Malenchanko aboard the ISS were however ready at all times to take over from the automated Kurs-NA via the TORU manual control system, should it have been needed.

Following Progress M-15M’s docking, the hatches between the ISS and Progress will be opened, and the Kurs-NA electronics box inside the Progress will be removed by the ISS crew, so that it can be returned to Earth, likely inside a SpaceX Dragon capsule, so that Russian engineers can analyse why the temperature issue affected the Kurs-NA system. 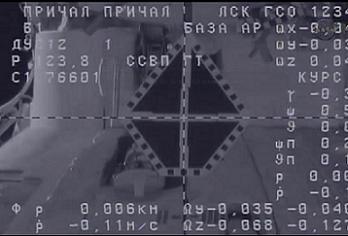 The data will aid in the eventual transition to Kurs-NA for all Progress and Soyuz spacecraft, targeted for around 2014.

Once the hatches are re-closed, Progress M-15M will undock from the ISS for the final time on 30 July in order to make way for the arrival of the Progress M-16M/48P spacecraft, which will both launch to the ISS and dock just six hours later on August 1, in a test of a new fast-rendezvous profile for Progress and eventually Soyuz spacecraft. (The Progress M-16M fast rendezvous will be covered in a future article on NASASpaceflight.com.)