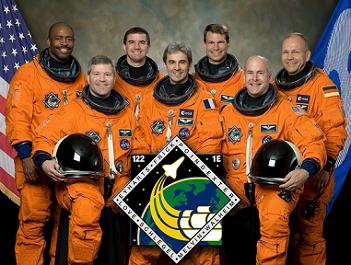 The commander of Discovery’s STS-131 mission, Alan Poindexter, passed away on Sunday, following a tragic accident. Tributes have been made to the US Navy captain, who also piloted Atlantis during her STS-122 mission, and served as a spacecraft communicator (CAPCOM) at the Johnson Space Center (JSC).

After being selected as an astronaut candidate in June 1998, Captain Poindexter served in the Astronaut Office in the Shuttle Operations Branch at Johnson as the lead support astronaut for NASA’s Kennedy Space Center in Florida.

His first taste of space came with Atlantis after being selected as pilot for the STS-122 mission. During final preparations for the launch of STS-122 in December 2007, Atlantis – or more specifically her External Tank – would make Capt. Poindexter and his crewmates wait as engineers worked to nail down and fix the vexing ECO (Engine Cut Off) sensor anomalies that had plagued the Shuttle fleet since STS-114 in 2005.

After two months of testing and fixing of the ECO sensor issue, Atlantis launched on the STS-122 flight on 7 February 2008, exactly seven years to the day after her STS-98 mission.

During STS-122, Atlantis and her crew delivered the first Laboratory to ISS since the U.S. Destiny lab (STS-98). STS-122 marked the beginning of construction of the international partner laboratories with the delivery of the European Space Agency’s Columbus research module to the ISS. 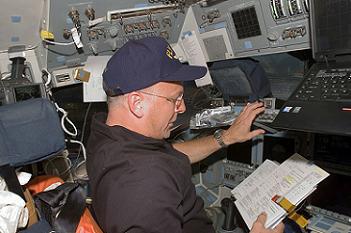 After 8 days and 16 hours of docked operations, Atlantis undocked from the International Space Station on 18 February 2008, with Captain Poindexter performing a flyaround maneuver of the orbital outpost.

Atlantis triumphantly returned to Earth on 20 February 2008 with a mid-morning landing under the control of Captain Poindexter and Commander Stephen Frick at the Kennedy Space Center.

Of Captain Poindexter on STS-122, fellow crewmate Leland Melvin said, “Alan and I joined the astronaut corps in 1998 and flew together on STS-122, which was truly an incredible experience. He was a passionate, caring and selfless individual who will be missed by all.”

Following STS-122, Captain Poindexter then gained the command of his own orbiter after being selected to the STS-131 crew. The orbiter was the flagship, Discovery, tasked with her penultimate mission.

After a near-flawless countdown, Discovery lifted off on STS-131 on Monday, 5 April 2010 at 06:21:22 EDT – 49 minutes before sunrise and 17 minutes after a long, visible pass of the ISS over the Kennedy Space Center. 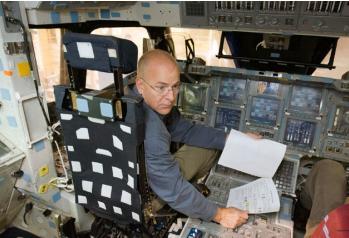 During the 15 day 2 hour flight, Discovery delivered nearly 20,000lbs of internal cargo to the ISS via the MPLM Leonardo, and three EVAs were conducted at the Station.

Following one weather wave-off day and a single orbit wave-off due to weather concerns, Discovery returned to the Kennedy Space Center on 20 April following a descending node reentry over the heartland of the United States, landing on Runway 33 15 days 2 hours 47 minutes and 11 seconds after launch.

With this, STS-131 stands as Discovery’s longest flight, resulting in Captain Poindexter having a special bond with the flagship, commanding her in space for her longest single mission period. 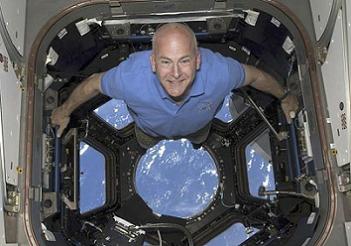 Reflecting on her time as Poindexter’s fellow astronaut and boss, Peggy Whitson, chief of the Astronaut Office at NASA’s Johnson Space Center in Houston, said, “We in the astronaut family have lost not only a dear friend, but also a patriot of the United States. He proudly served his country for 26 years as a fighter pilot, test pilot, astronaut and commander of a space shuttle.

“I am proud to have both flown in space and worked with him for so many years. Dex will be deeply missed by those of us at Johnson and the entire NASA family.”

Poindexter obtained an undergraduate degree with highest honors from the Georgia Institute of Technology in Atlanta and a graduate degree from the Naval Postgraduate School in Monterey, California.

After STS-131, he retired from NASA and the astronaut corps in December 2010 and returned to serve in the United States Navy as Dean of Students at the Naval Postgraduate School.

“Dex was a wonderful human being and a pleasure to have in the astronaut office,” Janet Kavandi, fellow astronaut and Director of Flight Crew Operations said. “His good-natured demeanor made him approachable to his crews and the many people at Johnson and Kennedy who enabled his missions.”

Soyuz TMA-03M undocks from ISS and returns to Earth