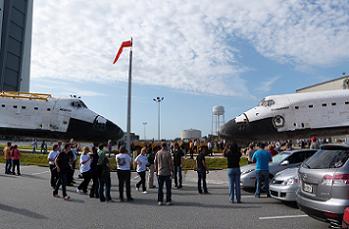 And now Endeavour has the left the building.  At the Kennedy Space Center (KSC), NASA and United Space Alliance (USA) workers backed Space Shuttle Orbiter Endeavour out of Bay 2 of the Orbiter Processing Facility (OPF) for the last time on August 16th, ending over twenty years of processing work on the spaceship.

The move also marks the conclusion of Transition and Retirement (T&R) processing for the youngest orbiter in the fleet. At the same time, Orbiter Atlantis was backed out of High Bay 4 of the Vehicle Assembly Building (VAB), and in a familiar scene over the past year, the sisterships traded places.

Before completing the swap, Endeavour and Atlantis were parked nose-to-nose in front of OPF Bay 3 for a few minutes, allowing a large crowd of space center workers a chance to soak in what is likely the last time two Shuttles will be out in public together.

“This is a very historical moment for us, to have these two vehicles together again,” Stephanie Stilson, NASA Flow Director for Orbiter Transition and Retirement, said during a question and answer session with the media.

Also known around KSC as Orbiter Vehicle-105 (OV-105), Endeavour was originally delivered to the Kennedy Space Center on May 7, 1991, and launched on the first of her twenty-five flights exactly one year later. Her last flight, STS-134, ended early on the morning of June 1 of last year.

After standard down-mission processing and removal of major propulsion system elements, the orbiter was parked in the VAB from mid-August of last year until early February, while the remaining Shuttle workforce concentrated on the other two vehicles.

Since February, all of Endeavour’s systems were decommissioned so that they are safe for museum display – fluids such as hypergolic propellant, ammonia, and freon, were drained and their systems were flushed.  Pyrotechnic systems that could have been used in an emergency were safed and removed.  The vehicle was powered down for the final time on May 11 and the payload bay doors were closed on June 19. 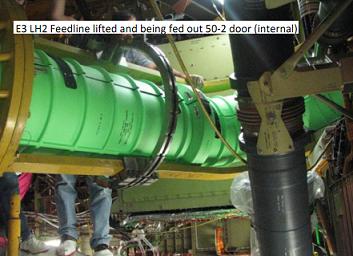 Another significant area of work on the vehicle since she was rolled back into the OPF in February involved removing most of the Main Propulsion System (MPS) components from the aft compartment, including tanks, valves, propellant lines for possible future use by the Space Launch System (SLS) program.

All of that SLS removal work is complete for both vehicles, Stilson noted during the move.

Replica versions of Space Shuttle Main Engines – know as RSMEs – were installed on Endeavour in the middle of July, followed by installation of the dome-shaped eyelids and heat shields around the engines. Finally, the tailcone was attached on August 6th.

In the meantime, other parts of the vehicle were being closed out for the upcoming ferry flight; the hatch to the orbiter’s crew module was closed for the final time at KSC on August 10th. The final major task was to weigh the orbiter early this week prior to rollover. 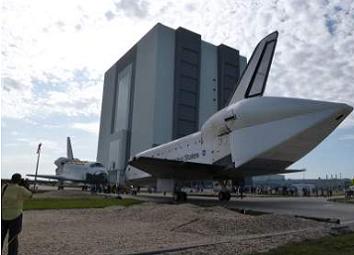 “It came out to be, with the tailcone, approximately 155 (155,000 pounds),” Stilson said. “If you take off the (weight of the) tailcone it got down to 149, so we were all really surprised – that was much lighter than we expected. But that goes to show you – all the components that were removed, especially out of the aft – the big impact of that. This is the lightest vehicle so far – even lighter than Enterprise, by about 600 pounds I think.”

Atlantis had been in the VAB since June 29, after being the last Shuttle orbiter to occupy OPF Bay 1. With Atlantis now in OPF-2, the processing team will finish T&R work over the next two months.

“The Visitor Center here at Kennedy wants to display (Atlantis) with the (payload bay) doors open, and therefore wanted it to look as if it were on STS-135, which had an airlock,” Stilson added. 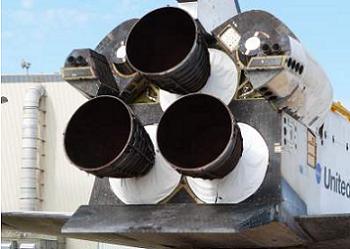 “They have contracted with a local company and are in the process of building a mockup airlock… we’ll install that in the Orbiter Processing Facility, we’ll also install some mockup cameras in the mid-body, we’ll finish reconfiguring the crew module, and (also finish) closing out (the areas) around the nozzles of the Replica Shuttle Main Engines.”

The current plan when work on Atlantis is complete is for the vehicle to be placed on the Orbiter Transporter System (OTS) and moved back to the VAB in mid-October, where she’ll wait a few weeks for a drive on the OTS down the road to the Visitor Center complex. 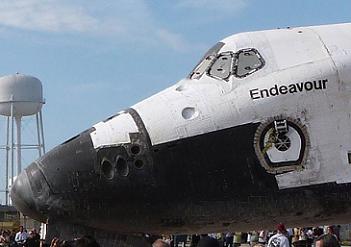 Endeavour will spend her last month at KSC in the VAB, much as she spent her first when she was first delivered to KSC in 1991.  Back then, Endeavour’s delivery brought the Shuttle fleet back to four, and the orbiter spent her first two months in VAB High Bay 2 before a vacancy opened up in the OPF.

Current plans call for Endeavour to stay in VAB High Bay 4 until September 14, when she will be towed out to the Shuttle Landing Facility (SLF).  The orbiter will be positioned in the Mate Demate Device (MDD), so that the lifting sling there can be attached.  Over the next day or so, Endeavour will be lifted up and placed on top of the NASA-905 Shuttle Carrier Aircraft.

Weather permitting, the ferry will takeoff from the SLF on September 17, bound for the Los Angeles International Airport (LAX); arrival at LAX is anticipated on September 20.