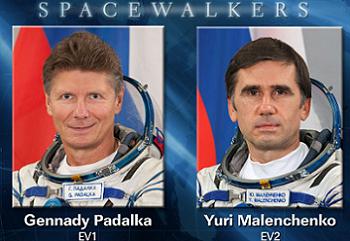 Two Russian cosmonauts stepped outside the International Space Station (ISS) on Monday, performing a highly successful Extra Vehicular Activity (EVA), or spacewalk, on the exterior of the Russian Segment (RS) of the station. The spacewalk, known as RS EVA-31, included hardware relocations, installations, retrievals, and deployments.

Following hatch opening of the Docking Compartment-1 (DC-1) “Pirs” module – delayed an hour due to a small leak between ISS modules – the EVA officially began at 3:37 PM GMT.

The first order of business for Padalka and Malenchenko was to relocate the GStM-2, more commonly known as Strela-2 (Strela meaning crane) boom from the DC-1 module to the forward end of the Functional Cargo Block (FGB) “Zarya” module. 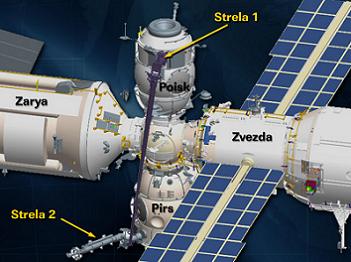 The two telescopic Strela booms on the ISS are manually operated via crank handles by spacewalking cosmonauts, and are used to aid spacewalkers on the Russian Segment by allowing them to move large hardware items around the exterior of the RS, and also by providing an extendable platform that spacewalkers can use to access hard to reach areas of the RS.

The two Strela booms were both previously mounted to attachment points on the DC-1 module, however DC-1 will be undocked from the ISS sometime within the next two years in order to free up the Service Module (SM) Nadir port, to which it is docked, for the arrival of the new Multipurpose Laboratory Module (MLM) “Nauka”.

Once DC-1 is undocked from the ISS and guided to a destructive re-entry via a Progress vehicle, the MLM will take DC-1’s place at the SM Nadir port, with a recent Flight Planning Integration Panel (FPIP – previously Flight Program Working Group/FPWG) manifest showing the MLM launch atop a Proton booster occurring in December 2013, while unofficial schedules now put the ever-slipping MLM launch into at least Q1 2014.

Indeed, one of the reasons for flying veteran Russian cosmonaut Gennady Padalka on his record third long-duration stay aboard the ISS was so that an experienced cosmonaut would be aboard the station during the arrival of the MLM, which was previously planned for May of this year. 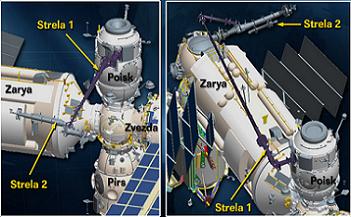 However, Padalka was still able to contribute his extensive experience to the tricky task of relocating Strela-2 from DC-1 to the FGB, a task necessitated by the impending departure of DC-1 from the ISS, which would take the two Strela booms along with it if they were not relocated to elsewhere on the station prior to DC-1’s undocking.

Specifically, Strela-2 was installed onto the Flight Releasable Grapple Fixture (FRGF) on the starboard side of the FGB GA, which was the very same grapple fixture which enabled the first “handshake” between US and Russian ISS hardware, when it was grappled by the robotic arm of Space Shuttle Endeavour on the STS-88 mission in November 1998, following which the FGB was docked to Pressurised Mating Adaper-1 (PMA-1), thus kicking off the assembly of the ISS. 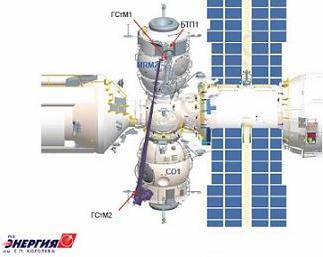 A special Strela adapter, which attaches to the FRGF in order to convert it into an interface compatible with the Strela attachment mechanism, was installed onto the FGB FRGF by the spacewalking crew of STS-133 in February 2011, as the Strela adapter was previously attached to a PMA-3 FRGF.

The actual procedures for relocating Strela-2 consisted of Padalka, positioned in the Strela-2 foot restraint, extending Malenchenko, positioned on the end of Strela-2, up to the Strela-1 boom on the port side of MRM-2, directly above Strela-2. 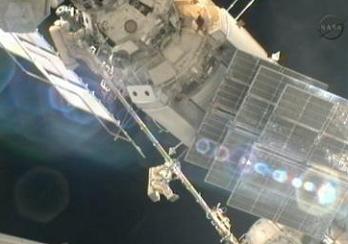 Strela-2 was then be attached to the end of Strela-1, whereupon Strela-2 was detached from the port side of DC-1, and Malenchenko on Strela-1 maneuvered Padalka and Strela-2 over to the forward end of the FGB (the GA).

Malenchenko then translated down the extended Strela-1 to the FGB GA, whereupon both Padalka and Malenchenko detached Strela-2 from Strela-1, and installed Strela-2 onto the Strela adapter on the FGB FRGF.

Strela-2 on the FGB was then be placed in a stowed position, and Malenchenko translated back up the extended Strela-1, while Padalka grabbed onto the end of Strela-1 near the FGB GA.

Malenchenko then slightly retracted Strela-1, prior to swinging it down to the port side of DC-1, whereupon Padalka attached the end of Strela-1 to an attachment point on DC-1. Strela-1 will remain in this extended configuration for the foreseeable future, in order to act as a translation aid between DC-1 and MRM-2 for future EVAs. 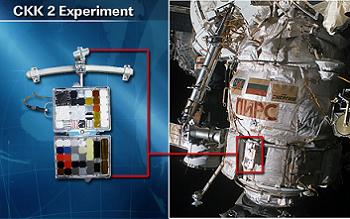 Once Padalka attached the end of Strela-1 to DC-1, he was tasked with removing a CKK space exposure experiment cassette from the exterior of DC-1, closing it up like a briefcase, to be brought back inside the ISS for return to Earth. However, due to the amount of time it had been on the outside of the Station, the cassette appeared to be stuck in place, leading to controllers deciding to remove the task from the timeline.

The next task for both Padalka and Malenchenko was to deploy a 21-inch diameter spherical satellite from the DC-1 EVA ladder.

After extracting the satellite from a holding tool, it was pushed away from the ISS in the Aft-Nadir direction, following which the satellite will stay on-orbit for around three months, during which time it will be used by Russian ground forces to evaluate ground station tracking and orbital debris decay models. 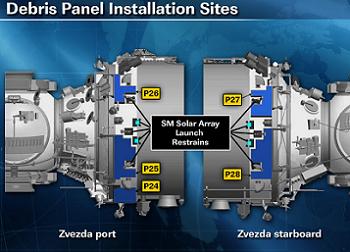 The next task for the spacewalking duo of Padalka and Malenchenko was to retrieve five debris shields from DC-1, prior to installing them around the small diameter section of the Service Module (SM) “Zvezda”, in order to “beef up” the weaker Micro Meteoroid Orbital Debris (MMOD) protection on this part of the station.

Opting not to take rest stops during night passes, the two experienced spacewalkers were over one hour ahead of the timeline, allowing them to work get-ahead tasks.

First up was the retrieval of an external experiment called Biorisk from DC-1 for return to Earth, and the other being the installation of two structural support struts between the DC-1 and the EVA ladder for added stability.

Padalka and Malenchenko then both ingress DC-1, prior to closing the hatch and beginning the re-pressurisation procedure, thus concluding RS EVA-31.

For the duration of the EVA, the crewmembers who remained inside the ISS must have access to their respective Soyuz spacecraft, in case an emergency evacuation is needed. This presented a problem however, since the SM Transfer Compartment (PKhO), to which DC-1 is docked at the Nadir port, is also used a back-up airlock should DC-1 fail to re-pressurise, and as such all hatches to the SM PKhO remained closed throughout the EVA. 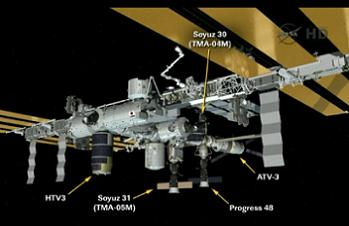 Crewmembers Suni Williams and Aki Hoshide did have access to all of the ISS that is forward of the SM PKhO – which is the FGB, MRM-1 (to which their Soyuz TMA-05M/31S is docked), and the entire United States Orbital Segment (USOS).

The hatches between DC-1 and the Progress M-16M/48P (which is docked to the DC-1 Nadir port) were closed prior to the EVA, in case DC-1 fails to re-pressurise, which would prevent Progress M-16M from undocking if its hatch was not closed.

The hatches between the SM and Europe’s ATV-3 spacecraft (which is docked to the SM Aft port) were also closed prior to the EVA, in case the SM PKhO fails to re-pressurise, which would prevent crewmembers from accessing the SM via the PKhO forward hatch, thus requiring ATV-3 to undock from the SM Aft port so that crews could gain access to the SM via docking a Soyuz to the SM Aft port.