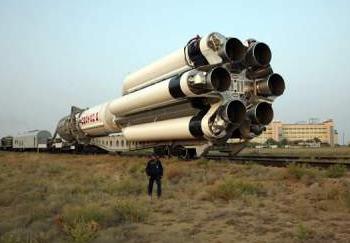 A Russian government Proton-M rocket launched from the Baikonur Cosmodrome in Kazakhstan on Monday, carrying two telecommunication satellites. The 19:31 GMT launch of the workhorse of the Russian fleet involved the lofting of the Telkom-3 and Ekspress-MD2 satellites on a several hour flight to their orbital destination. However, both satellites were lost due to a failure of the Briz-M upper stage.

The Proton vehicle has a heritage of nearly 400 launches since 1965 and is built by Khrunichev Research and State Production Center. While this mission was conducted by the Russian government, the Proton is also used by International Launch Services (ILS).

The Proton-M vehicle launched without issue.

The Briz-M Breeze-M upper stage was the Phase III variant, a recent upgrade which utilizes two new high-pressure tanks (80 liters) to replace six smaller tanks, along with the relocation of command instruments towards the centre – in order to mitigate shock loads when the additional propellant tank is being jettisoned.

Monday’s launch – delayed several times from May, ironically due to problems with the Upper Stage – was scheduled to utilize four burns of the Briz-M (model 99531) to loft its two passengers to their GTO destination.

However, Russian Space Agency Roscosmos released a statement, around the time spacecraft separation confirmation was due, noting both satellites did not make it to the transfer orbit, citing a problem with one of the Briz-M burns.

A Russian media report, via RIA Novosti, then confirmed both satellites are considered lost, adding to the Briz-M’s failure history that includes the loss of the Ekspress-AM4 satellite last year, although it did enjoy 12 nominal missions since that loss.

The original plan was to launch Telkom-3 with the Yamal-300K satellite, using the 74·5 degree azimuth to a 48 degree initial orbit. In turn, Ekspress-MD2 was to be launched with Ekspress-AM8. However, the failure of the JCSAT-11 mission, led to the closure of the 48 degree orbit. 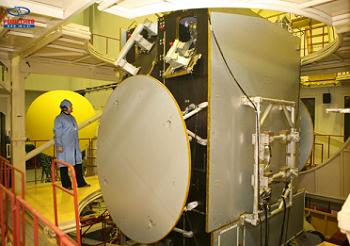 The Telkom-3 Satellite was built by ISS-Reshetnev with its communication equipment made by Thales Aleniaspace. It was designed to cater for the increasing demand of transponder in the development of Indonesia’s satellite business service, particularly for the Telkom Group who have invested $200m into the project.

“Telkom-3 Satellite is designated not only for commercial purpose and for satellite capacity improvement in enhancing ICT infrastructure quality but also for the government needs such as defense and security (military) and for the support of operations of state-owned firms as well,” said Rinaldi Firmansyah, President of Telkom.

This was the first time Indonesia has purchased a satellite from Russia, adding to their fleet that includes the Telkom-2 satellite, that was launch by an Ariane 5 in 2005. 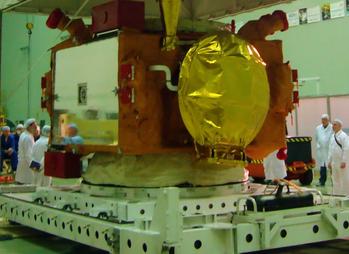 The Express MD2 was a small communication satellite, designed and fabricated by the Khrunichev State Research and Production Space Center under a contract with Russian Satellite Communications Company(RSCC) and Thales Alenia Space of Italy.

The contact was within the framework of the Program of Renovation of Russian State Civilian Satellite Orbital Constellation and the Federal Space Program of Russia for 2006-2015.

The satellite was designed to relay, round-the-clock, data streams to multiple users within the Russian Satellite Communications and Broadcasting System and sports 8 C-band-transponders and 1 L-band transponder.

The 1,140 kg satellite was expected to have a service life of 10 years.