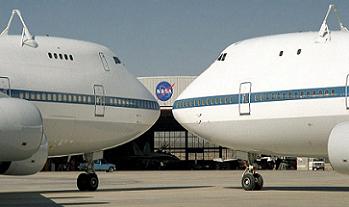 The Shuttle Carrier Aircraft (SCA), NASA 905, arrived at the Kennedy Space Center (KSC) on Tuesday, ahead of its role of carrying Endeavour on a cross-country farewell tour. The duo will depart next Monday for a three-day tour that will take in numerous centers and facilities that have played a role in the Shuttle Program, prior to arriving in Los Angeles.

The iconic 747 arrived at the spaceport after its journey from the Dryden Flight Research Center (DFRC) in California, swooping in on the Shuttle Landing Facility (SLF) just after 5pm local time.

NASA 905 is the only SCA in service, after NASA 911 made its final flight February 8, 2012. The latter’s final mission was a short flight lasting only about 20 minutes to the Dryden Aircraft Operations Facility adjacent to Air Force Plant 42 in Palmdale, California.

The 747 four-engine intercontinental-range, swept-wing “jumbo jets” first flew in 1969, before entering commercial service in 1970, prior to being purchased by NASA to ferry orbiters cross-country.

The SCA sports three struts with associated interior structural strengthening protruding from the top of the fuselage (two aft, one forward) on which the orbiter is attached. They also have two additional vertical stabilizers, one on each end of the standard horizontal stabilizer, to enhance directional stability.

After NASA 905 completes its role with the orbiters – which will be marked by Endeavour’s trip to California – both SCAs will support NASA’s Stratospheric Observatory for Infrared Astronomy (SOFIA) Boeing 747SP aircraft.

Parked near the Mate-Demate Device (MDD), the SCA will wait for Endeavour to be rolled out of the Vehicle Assembly Building (VAB) – where she has been staying since departing Orbiter Processing Facility -2 (OPF-2) in mid-August – and towed to the SLF. 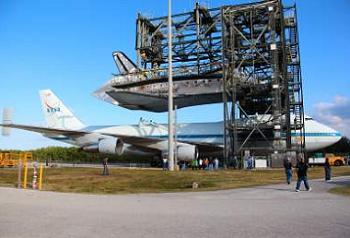 This event, scheduled for Friday, will involve preparations to attach Endeavour to the MDD, rising her off the ground, in order to allow the SCA to carefully roll beneath the lofted orbiter. Lowered on to the back of the SCA, mating operations will be carried out over the weekend, ahead of Monday’s final departure.

Due to security and variations in the weather over the flight path, the actual farewell tour destinations and timings may be subject to change. However, plan is for an ambitious and respectful farewell to the large team – based around the country – that helped Endeavour fly into the heavens.

The tour will be spread over three days, beginning at sunrise on Monday, as the SCA and Endeavour will depart the SLF and perform a flyover of various areas of the Space Coast, including the Kennedy Space Center, Cape Canaveral Air Force Station and Patrick Air Force Base. 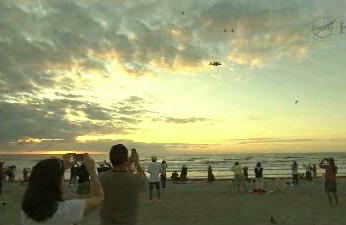 This opening leg of the farewell to her home base will be similar to Discovery’s trip north on the SCA, when large crowds gathered to wave goodbye to the flagship.

The SCA will head west and conduct low flyovers of NASA’s Stennis Space Center in Mississippi – a key center for the testing of the Space Shuttle Main Engines (SSMEs) that lofted Endeavour uphill during her 25 missions. Stennis has already transitioned to the future, highlighted by J-2X engine testing for the Space Launch System (SLS).

Next up on Endeavour’s list is the famous Michoud Assembly Facility (MAF) in New Orleans, home of the External Tanks that rode with her for the opening nine minutes of her missions. The facility lost most of its workforce after the retirement of the fleet, though some work is continuing with the Orion and SLS programs. 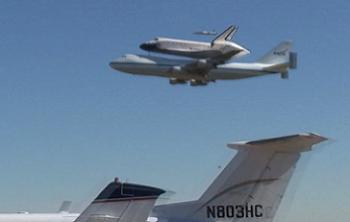 As the duo arrives over the Texas Gulf Coast area, the SCA will perform low flyovers above various areas of Houston, Clear Lake and Galveston before landing at Ellington Field near NASA’s Johnson Space Center – home of the Mission Control Center (MCC) that watched over the orbiters during their missions.

Weather permitting, the SCA and Endeavour will stay at the nearby Ellington Air Field for the remainder of September 17 and all day September 18, the same facility the duo flew over on the way back to Florida, following her landing in California to conclude STS-126.

At sunrise on Wednesday, September 19, the aircraft will depart Houston, make a refueling stop at Biggs Army Airfield in El Paso, Texas, and conduct low-level flyovers of White Sands Test Facility near Las Cruces, New Mexico, home to the only shuttle landing in the State – Columbia’s STS-3 return – and numerous orbiter hardware testing facilities, such as on the Reaction Control Systems (RCS). 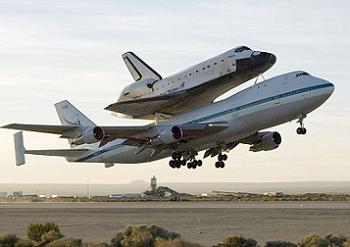 From there, the duo will arrive at NASA’s Dryden Flight Research Center at Edwards Air Force Base in California, before landing around mid-day at Dryden.

On the morning of September 20, the SCA and Endeavour will take off from Dryden and perform a low-level flyover of northern California, passing near NASA’s Ames Research Center at Moffett Field, California, along with taking in various landmarks in multiple cities, including San Francisco and Sacramento.

Endeavour and the SCA also will conduct a flyover of many Los Angeles sites before landing about 11 am local time at LAX.