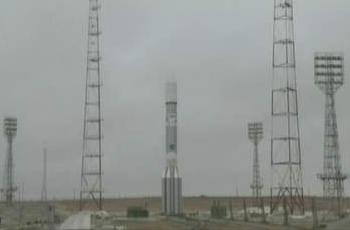 International Launch Services (ILS) have launched their Proton-M rocket in a daylight launch from the Baikonur Cosmodrome in Kazakhstan. Launch was on schedule at 8:37 am GMT, with the Proton’s Briz-M (Breeze-M) Upper Stage successfully deploying the large telecommunications satellite into its desired orbit, after nine hours of flight.

The Proton M launch vehicle is utilizing a 4-burn Breeze M mission design following lift off from Pad 24 at Baikonur. The first three stages of the Proton used a standard ascent profile to place the Orbital Unit (Breeze M Upper Stage and the Intelsat 23 satellite) into a sub-orbital trajectory.

From this point in the mission, the Breeze M will perform planned mission maneuvers to advance the Orbital Unit first to a circular parking orbit, then to an intermediate orbit, followed by a transfer orbit, and finally to a near geostationary orbit. Separation of the Intelsat 23 satellite is scheduled to occur approximately 9 hours and 30 minutes after liftoff.

This mission is returning the Proton workhorse back to flight, following the Russian Federal Telkom-3/Express MD-2 mission failure – caused by the Breeze M – that occurred on August 7. 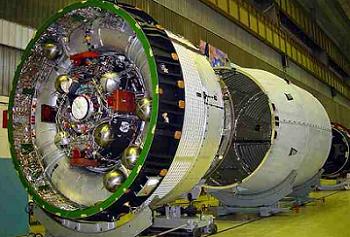 The Failure Review Oversight Board (FROB) concluded the review of the Russian State Commission report on September 11 concerning the root cause, relating to a component of the pressurization system that was not manufactured to specifications. This caused a shutdown of the Breeze M Main engine by the Breeze M flight control system 7 seconds into the planned 18 minute and 5 second 3rd burn.

The corrective action plan includes stringent quality oversight of all rework procedures, testing, support equipment, and personnel, both at the KhSC production facilities and in Baikonur. In addition, ILS and KhSC will develop specific initiatives to enhance the unified Quality Management System (QMS) that is installed and operating at all KhSC production facilities.

“This is an opportunity to learn, enhance and improve the overall reliability and processes of our systems,” said acting ILS Vice President and Chief Technical Officer, John Palmé.

“I would like to thank the nine representatives of ILS customers, two insurance underwriting representatives and independent outside subject experts who participated in the ILS FROB process for their professionalism and diligence. We appreciate the patience and support of our customers as we plan for the return to flight of the Proton vehicle.”

Following the ILS launch, the Proton’s next test will come via a Russian Federal mission shortly after.

Orbital Sciences Corporation built IS-23 as part of Intelsat’s fleet replacement and expansion plans. The satellite is scheduled to start service at 307 degrees East longitude in 2012, and will replace the Intelsat 707 satellite. As a C-band and Ku-band satellite, Intelsat 23 will provide enhanced capacity for enterprise, oil and gas, and data networking services.

(Images via ILS and Orbital).