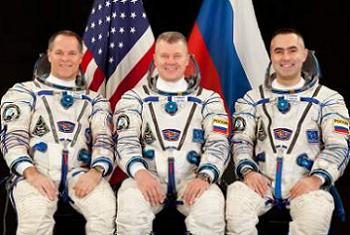 Ford, who previously served as pilot aboard space shuttle Discovery on her STS-128 mission to the station in September 2009, will first serve as an Expedition 33 flight engineer through mid-November, and will then transition to commander of Expedition 34 through March, 2013.

Ford was the sole American on the launch, as the ISS looks forward to gaining Russian Flight Engineers Novitskiy and Tarelkin of the Russian Federal Space Agency.

Ford previously spent 14 days in space as pilot aboard Discovery, delivering the Multi-Purpose Logistics Module (MPLM) “Leonardo” to the station with more than 15,000 pounds of science and storage racks to the orbiting outpost.

During the mission, Ford’s tasked included the use of Discovery’s OBSS (Orbiter Boom Sensor System) to help conduct a survey of the orbiter’s Thermal Protection System (TPS); installed and unberthed “Leonardo,” operated the Space Station Remote Manipulator System (SSRMS) in support of two of the mission’s three spacewalks and helped unload critical supplies from Leonardo.

The Soyuz TMA-06 launch was delayed from October 15 to October 23 due to failure of equipment aboard Soyuz TMA-06M spacecraft during tests on Baikonur cosmodrome.

The trio’s Soyuz TMA-06M were lofted into orbit by their Soyuz FG launch vehicle at 10:51 UTC.

This was the first Soyuz launch from Pad Number 31/6 since Soyuz T-12 in 1984, 28 years ago – due to the need to check new systems installed on this complex for manned launches, while maintenance and upgrade requirements to launch the new Soyuz range at Pad Number 1/5.

Docking is expected in two day’s time, on Thursday, with the Soyuz joining with the space-facing Poisk module of the orbiting laboratory. 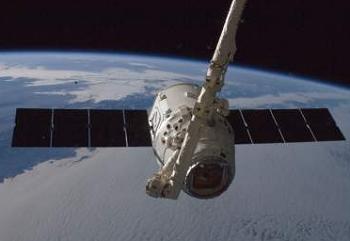 The new crew be aboard the station as SpaceX’s Dragon departs after its CRS-1 mission, and should get to see the next Dragon arrive in January on its CRS-2 mission – pending the outcome of the failure investigation into the loss of Engine 1 on the Falcon 9 launch vehicle during ascent.

The crew’s tour should include no less than our Russian Progress resupply vehicle visits, although it is now unlikely they will get to see Orbital’s Cygnus vehicle make its debut run to the ISS, following yet more delays to its schedule.

Ford, Novitskiy and Tarelkin will remain aboard the station until March 2013, whereas Williams, Malenchenko and Hoshide, who arrived at the complex in July, will return to Earth November 19.