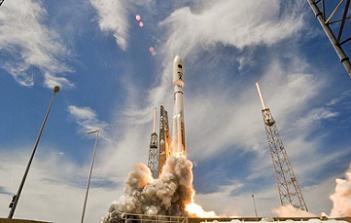 Lockheed Martin have completed the on-orbit testing of the second Advanced Extremely High Frequency (AEHF) military communications satellite, allowing for Satellite Control Authority (SCA) to be turned over to the US Air Force (USAF) team at Vandenberg Air Force Base in California for its operation role.

AEHF-2 was launched on May 4, by AV-031 – the United launch Alliance (ULA) Atlas V rocket in the 531 configuration – from Space Launch Complex 41 at the Cape Canaveral Air Force Station, Florida.

The launch came at the second attempt, following an earlier scrub due to a lack of helium flow from the ground support equipment to the Interstage Adapter compartment on the launch vehicle.

Advanced Extremely High Frequency, or AEHF, is a series of communications satellites being launched to supplement, and eventually replace, the earlier Milstar spacecraft, which were launched between 1994 and 2003. AEHF is designed to be secure, survivable, and resistant to attempted jamming, and will provide communications for the US military, as well as the armed forces of the United Kingdom, Canada, and the Netherlands.

Current plans will see two further launches increase the number of AEHF satellites in orbit to four; one satellite is already in orbit, one is awaiting launch, and a fourth is under construction.

Negotiations are underway regarding the procurement of two further satellites, increasing the number of spacecraft to six; the number which was originally planned before the programme was scaled back in favour of the now-cancelled Transformational Satellite Communications System, or TSAT. 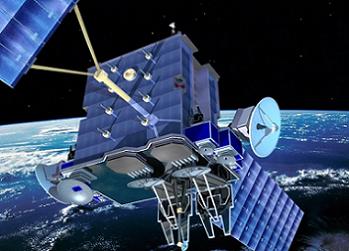 AEHF-2 is a 6,170-kilogram (13,600 lb) spacecraft, which was constructed by Lockheed Martin, and is based on the A2100M satellite bus. Its communications payload, which was built by Northrop Grumman, provides an uplink at a frequency of 44 gigahertz in the Extremely High Frequency band, and a downlink at 20 gigahertz in the Super High Frequency band, with a variable data rate from 75 bits per second to 8.192 megabits per second.

The spacecraft’s propulsion system consists of an IHI Aerospace BT-4 liquid-fuelled apogee motor, a liquid-fuelled reaction control system, and a system of Hall current thrusters. Including research and development, AEHF-2 is estimated to have cost around two billion dollars.

The launch of AEHF-2 came 21 months after that of AEHF-1, which is now known as USA-214, in August 2010. The day after launch, USA-214 was expected to perform a manoeuvre to begin raising its orbit, however shortly after ignition its apogee motor failed.

Following another failed burn two days later, forcing engineers to devise an alternative plan to raise the satellite into its final orbit. Using its manoeuvring engines and Hall thrusters, the satellite finally arrived in geosynchronous orbit in late October last year; fourteen months after launch, and almost a year behind schedule.

The problems with USA-214 resulted in the launch of AEHF-2, which at the time of the first AEHF launch was scheduled for February 2011, being delayed to ensure that it would not be affected by the same problem, and to allow testing of USA-214 in orbit. The next launch, that of AEHF-3, is expected to occur in September next year.

So far, AEHF-2 is enjoying its life in space, completing the key milestone of on-orbit testing.

“Completion of on-orbit testing and handover of AEHF-2 is a critical milestone for the Air Force and our nation,” said Dave Madden, Director of the Military Satellite Communications Systems Directorate at the U.S. Air Force’s Space and Missile Systems Center.

“The AEHF satellites on orbit and those planned for launch will play a pivotal role in our national security for years to come.”

As noted, Lockheed Martin is currently under contract to deliver four AEHF satellites and the Mission Control Segment.  The program has begun advanced procurement of long-lead components for the fifth and sixth AEHF satellites.

“With the first two AEHF satellites now on orbit, the Department of Defense is well on its way to augmenting, improving and expanding its critical military satellite communications architecture to meet increasing demand from users worldwide.”