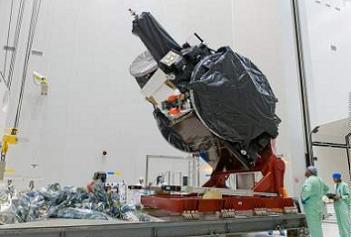 Arianespace have launched their Ariane 5 ECA on another mission, lofting two satellites into orbit – namely Star One C3 & Eutelsat21B/W6A – from the European Spaceport in Kourou, French Guiana. The launch was on schedule at the opening of the window at 21:05 UTC on Saturday, with the workhorse tasked with sending its two passengers to GTO.

As such, Ariane 5 flights carry the “VA” designation, followed by the flight number.  The “V” stands for “vol,” the French word for “flight,” while the “A” represents the use of an Ariane launch vehicle.

This flight was designated Flight VA210 in Arianespace’s numbering system, representing the 210th mission of an Ariane family launcher since the maiden liftoff of an Ariane 1 version in 1979. The launch was also be the 66th Ariane 5 liftoff.

Payload lift performance for the Ariane 5 was estimated at 9,215 kg. – which includes 8,250 kg. for the two satellites, along with the launcher’s dual-passenger dispenser system and integration hardware.

EUTELSAT 21B – with a mass of five metric tons – is based on the Spacebus 4000 platform and will offer significantly increased capacity, incorporating 40 Ku-band transponders compared to 29 on the EUTELSAT 21A relay platform it is to succeed, while offering improved power and coverage.

After being lofted by Ariane 5, EUTELSAT 21B will operate for Eutelsat Communications at 21.5 degrees East – a major orbital position for data, professional video and government services, with coverage over Europe, North Africa, the Middle East and Central Asia.

The spacecraft was built by Thales Alenia Space.

The 3,200 kg Star One C3 is the newest member in the third generation of satellites for Brazil’s Star One – an Embratel company.  Produced by Orbital Sciences Corporation with 28 C-band and 16 Ku-band transponders, the satellite will replace the Brasilsat B3 satellite, currently operating at the 75 degrees W orbital position. 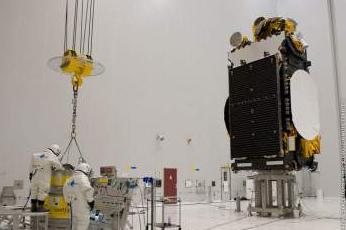 With a footprint encompassing Miami and the entire South America region – including the Andean countries of Bolivia, Peru, Ecuador, Colombia, and Venezuela – Star One C3 will expand the capacity and coverage for TV, data and voice transmission services.

Additionally, Star One C3’s reach will span the waters under Brazilian jurisdiction to the pre-salt area – the group of rocks located in marine portions of the country’s coast, where there is potential for exploiting accumulations of oil. By providing coverage in this area, the satellite offers better communication possibilities for the oil and gas industry.

Oil and Gas are two of the key commodities that has helped Brazil become an economic power in recent years, aiding its rise on the international stage to the level where it will host the planet’s number 1 and 2 sporting events, namely the 2014 Football World Cup and the 2016 Olympics respectively.