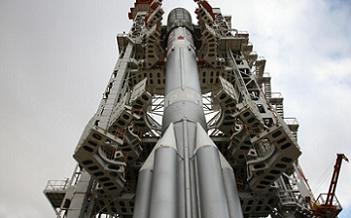 International Launch Services (ILS) have launched their Proton-M rocket from the Baikonur Cosmodrome in Kazakhstan. Launch was on schedule at 18:31 GMT, with the Proton’s Briz-M (Breeze-M) Upper Stage successfully deploying the EchoStar XVI communications satellite into its desired orbit, after nine hours of flight.

The first three stages of the Proton used a standard ascent profile to place the orbital unit (Breeze M upper stage and the EchoStar XVI satellite) into a sub-orbital trajectory. From this point in the mission, the Breeze M performed planned mission maneuvers to advance the orbital unit first to a circular parking orbit, then to an intermediate orbit, followed by a transfer orbit, and finally to a geostationary transfer orbit.

Separation of the EchoStar XVI satellite was deemed a success approximately 9 hours, 12 minutes after liftoff.

This was ILS’ second mission since the Proton workhorse returned to flight, following the Russian Federal Telkom-3/Express MD-2 mission failure – caused by the Breeze M – that occurred on August 7. 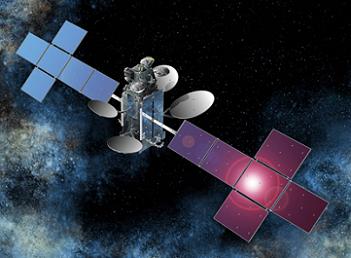 EchoStar XVI will join EchoStar’s fleet of satellites that are used to provide global communication, commerce and entertainment. Operated by EchoStar, EchoStar XVI will be fully leased to DISH for use in its Direct-to-Home (DTH) services in the United States.

An all Ku-band satellite (36 in total) with CONUS and spot beam transponders, EchoStar XVI will utilize SS/L’s flight-proven 1300 spacecraft bus and be located at 61.5 degrees west longitude. It is expected to have a liftime of 15 years on orbit.

Meanwhile, ILS announces the departure of Frank McKenna as ILS’ president and the appointment of Phil Slack as president of ILS. For the past twelve years, Slack was the vice president and chief financial officer for ILS. Prior to ILS, he held several senior business management positions with Boeing, primarily in their space transportation business from 1988 until joining ILS in 2000.

(Images via ILS and SS/Loral).