Arianespace launched their final Ariane 5 launch of the year by successfully lofting two satellites into orbit – Skynet 5D and Mexsat 3/Bicentenario – from the European Spaceport in Kourou, French Guiana. The launch was on schedule at the opening of the window at 21:49 UTC on Wednesday.

As such, Ariane 5 flights carry the “VA” designation, followed by the flight number. The “V” stands for “vol,” the French word for “flight,” while the “A” represents the use of an Ariane launch vehicle.

This flight was designated Flight VA211 in Arianespace’s numbering system, representing the 211th mission of an Ariane family launcher since the maiden liftoff of an Ariane 1 version in 1979. The launch was also be the 67th Ariane 5 liftoff.

The total payload performance for this mission was approximately 8,635 kg. – which included the two satellite passengers and their integration hardware for Ariane 5’s dual-payload deployment system. 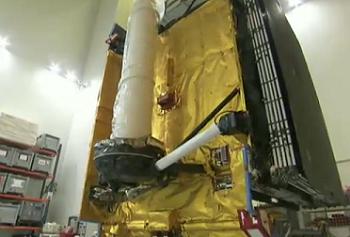 Skynet 5D rode to space as the upper passenger in Ariane 5’s payload “stack,” deployed first in the launch sequence, at T+27 minutes.

This is was the fourth satellite in the Skynet 5 series – built by Astrium – which is the prime contractor for the British military satellite program, operated as a Private Finance Initiative with the United Kingdom’s Ministry of Defence.

Previously, Arianespace orbited the Skynet 4B, 4C, 4E and 4F satellites for the British Ministry of Defence. Skynet 5D was the 35th military payload to have chosen an Ariane launch.

The Astrium Services business of Astrium operates the Skynet military satellite constellation and the ground network for all beyond-line-of-sight communications to the UK Ministry of Defence and the Cabinet Office. Astrium Services also provides Skynet-based communication services to other forces around the world, including the United States, Portugal and Australia.

Larger fuel tanks on this latest Skynet spacecraft will enable it to be repositioned more frequently to meet operational needs. It will weigh approximately 5,000 kg. at launch and carry X-band transponders to provide secure voice and data communications for military operations in peacekeeping and battlefield conditions 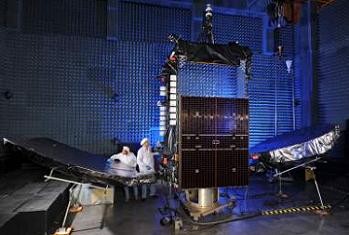 This was the fifth Mexican satellite launched by Ariane and the 23rd Orbital-built satellite to be transported by Arianespace. It was deployed by the vehicle at T+36 minutes.

The spacecraft has a design lifetime of 16 years and weighs about 3,000 kg. for liftoff. It will be positioned in geostationary orbit at 114.9 deg. West to provide communication services to Mexico and its surrounding waters.

Under a contract with Boeing, Orbital completed the work on MEXSAT Bicentenario as part of a three-satellite order for the Federal Government of Mexico. As prime contractor for MEXSAT, Boeing is providing two larger satellites in the series that are scheduled for launch in 2013 and 2014.

The Secretaria de Comunicaciones y Transportes of Mexico will take over day-to-day operations of the satellites as they are launched and undergo on-orbit testing, verification and positioning.

“MEXSAT Bicentenario is based on Orbital’s flight-proven GEOStar-2 platform, which enabled us to deliver the spacecraft on a short delivery schedule,” said Christopher Richmond, Orbital senior vice president of Communications Satellite Programs. “We are looking forward to a successful launch and a smooth on-orbit checkout sequence.”