SpaceX’s ambitions of creating a full reusable launch vehicle have taken another step forward via the third – and most ambitious to date – test of their Grasshopper test vehicle. The 40 meter leap into the skies at their test facility in Texas – followed by a stable hover and smooth landing – was conducted without a hitch.

The Grasshopper – consisting of a Falcon 9 rocket first stage, Merlin 1D engine, four steel landing legs with hydraulic dampers, and a steel support structure – is aiming to blaze a trail towards what many people think is a near-impossible task, to create the world’s first fully reusable orbital launch system.

The plan revolves around a modified version of the Falcon 9 launch vehicle design, creating a version of the flyback booster concept – one where all of the vehicle’s components return back to Earth for reuse.

Via plans unveiled by SpaceX founder and chief executive Elon Musk, the first and second stages that would fly back to the launch site under their own power. With Dragon already a spacecraft that has proven it can launch, fly in space and return safely, the ultimate goal is to drive down costs by reusing every element of their launch system.

“This is a very difficult thing to do. Even for an expendable launch vehicle, where you don’t attempt any recovery, you only get maybe two to three percent of your lift-off weight to orbit. That’s not a lot of room for error,” noted Mr Musk during his first public announcement of his ambitions for the reusable Falcon 9, during a speech to the National Press Club at the beginning of 2012.

SpaceX are keeping parts of the plan to themselves, as can be expected, but a notional video of the modified version of the Falcon 9/Dragon combination was seen during Mr Musk’s initial announcement. 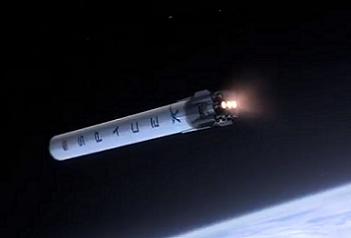 The video shows the vehicle launching towards a nominal First Stage MECO (Main Engine Cut Off) and staging – as per usual – prior to the the entire first stage rotating 180 degrees via Reaction Control System (RCS) thrusters, and then reigniting three of its nine engines to “boost back” the near-empty stage back to the launch site.

Descending back to the launch pad, the First Stage would fire one engine to decelerate to a pinpoint landing on its specially-made landing legs, in an area depicted in the video as the Cape Canaveral Air Force Station (CCAFS) Skid Strip runway complex.

This element is currently being tested at SpaceX’s McGregor test site in Texas, with three tests of the Grasshopper incrementally challenging the vehicle to safely rise into the air, hover, and then smoothly return to the ground on its landing legs. 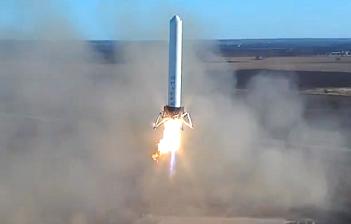 The latest test – which took place on December 17 – was by far the “highest” leap by the Grasshopper. SpaceX also strapped a life-size dummy to the top of the landing leg structure, providing a visible reference to both the size of the test vehicle and its stability during the test.

“The 12-story flight marks a significant increase over the height and length of hover of Grasshopper’s previous test flights, which took place earlier this fall. In September, Grasshopper flew to 1.8 meters (6 feet), and in November, it flew to 5.4 meters (17.7 feet/2 stories) including a brief hover,” noted SpaceX in statement on Sunday.

“Testing of Grasshopper will continue with successively more sophisticated flights expected over the next several months.”

However, Falcon 9 is a two stage launch vehicle, meaning SpaceX will have to continue pushing their Grasshopper through testing, to mimic the challenges that will face the First Stage, ahead of evaluating a test plan for the Upper Stage. 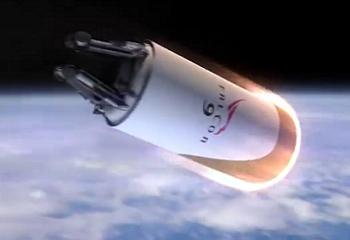 Per the notional concept video – the Upper Stage would be tasked with completing its orbital insertion burn, prior to spacecraft separation, ahead of thrusters rotating the stage 180 degrees, aft forward, ahead of engine restart for another burn to deorbit the Upper Stage.

Protected by what appears to be a version of the PICA-X (a proprietary variant of NASA’s phenolic impregnated carbon ablator (PICA) material) heat shield used by the Dragon spacecraft, the Upper Stage dives back to Earth, protected against the heat and force of re-entry, prior to using what is depicted as four thrusters to decelerate and land on its landing legs.

“With the Upper Stage, after dropping off the satellite or spacecraft, we do a deorbit burn, re-enter – you need a quite powerful heat shield – and steer aerodynamically back to the launch pad, landing propulsively on landing legs,” added Mr Musk added during his National Press Club briefing.

“(Also worth noting,) you don’t need wings to steer aerodynamically, you just need some lift over drag numbers and lift vector.” 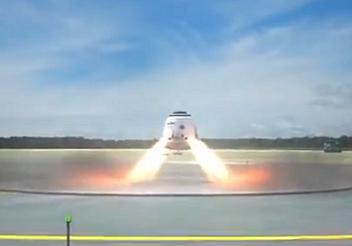 Dragon is likely to be the less challenging element of the F9 reusable plan, given it is currently showing no ill signs during its Commercial Resupply Services (CRS) role for NASA.

However, it currently returns to Earth under parachutes, for a splashdown in the Pacific Ocean. The plan – even outside of the reusable ambitions – is for Dragon is to propulsively land on terra firma, via the ingenious use of Dragon’s Draco thrusters – that initially have a standby role as the Launch Abort System (LAS) motors during ascent.

The sum total would be – if successful – for both the entire launch vehicle, and the Dragon spacecraft, to return to its launch site, ready to be processed for use on a future mission, removing the costly need to build new hardware for each launch.

The plan is ambitious, it may prove to be a challenge too far, but Mr Musk wants to give it a try.

“I wasn’t sure it could be solved, but relatively recently I’ve come the conclusion it can be solved and SpaceX is going to try and do it,” Mr Musk claimed at the Press Club briefing. “We could fail, I’m not saying we’re certain of success, but we’re going to try to do it.”