Expanding on Bigelow’s inflatable module for the ISS

NASA managers are set to provide details on the deal they have signed with Bigelow Aerospace for an inflatable module to become part of the International Space Station (ISS). The Bigelow Expandable Activity Module (BEAM) will be a vital testbed for future applications and may ride to the ISS inside the trunk of a SpaceX Dragon.

The Technical Interchange Meeting (TIM) ran between the 12th and 13th of January in 2011, fostering numerous meetings between the Agency and Bigelow Aerospace ahead of this announcement.

“The International Space Station is a unique laboratory that enables important discoveries that benefit humanity and vastly increase understanding of how humans can live and work in space for long periods,” Ms Garver said.

“This partnership agreement for the use of expandable habitats represents a step forward in cutting-edge technology that can allow humans to thrive in space safely and affordably, and heralds important progress in U.S. commercial space innovation.”

Bigelow Aerospace was founded by Robert Bigelow in 1998. The company is a pioneering world leader in the area of expandable space station modules.

Following the cancellation of NASA’s ISS TransHab inflatable module in 1999 due to budgetary and schedule issues, Bigelow licensed the cancelled TransHab technology from NASA via three Space Act agreements. 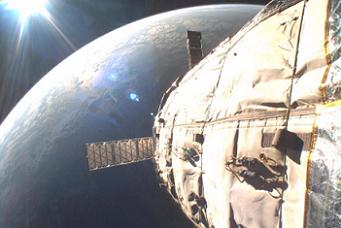 Over the next 10 years, Bigelow invested and researched heavily into inflatable technology, with a view to one day making it available to paying customers in the form of an orbital hotel complex. To date, Bigelow has successfully launched two small, uncrewed inflatable demonstration modules – Genesis I in 2006, and Genesis II in 2007.

Bigelow would gain confidence in – and operational experience with – its inflatable modules in a crewed environment, confidence which would undoubtedly also be gained by any potential future customers to Bigelow. Given that the ISS is a permanently crewed operational environment, it is an ideal testbed to demonstrate these technologies. 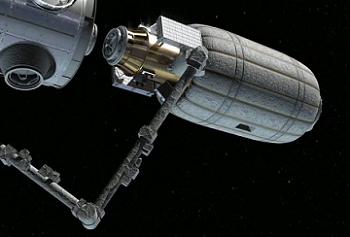 The purpose of the ISS inflatable module would be a simple, limited capability stowage volume, similar in purpose to the currently on-orbit Japanese Logistics Platform (JLP), which serves as a stowage module for scientific equipment from the Japanese Pressurised Module (JPM) laboratory. The module would be certified to remain on-orbit for two years.

Very few details have been released ahead of the media event. However, NASASpaceflight.com’s L2 second has been provided with notes and updates since the beginning of 2011, providing addition clues into what may be announced.

Bigelow will provide the inflatable and inner core structure of the module, and perform all required flight analysis.

An inflatable module has a rigid center core where the equipment is typically located and where the fabric is stowed for launch. After the module is berthed, it is inflated resulting in a pressurized fabric shell with a cylindrical core structure that houses equipment, etc.

In-spite of their soft shell, Bigelow’s inflatable modules are more resistant to Micro Meteoroid Orbital Debris (MMOD) strikes than current metallic-shelled l ISS modules, in part due to Bigelow’s use of multiple layers of Vectran, a material which is twice as strong as Kevlar. In ground tests, MMOD objects that would penetrate ISS modules only penetrated half-way through the skin of Bigelow’s modules.

A proposal for an inflatable module on the ISS was outlined at NASA’s Exploration Enterprise Workshop, which was held in Galveston, TX, in May 2010. 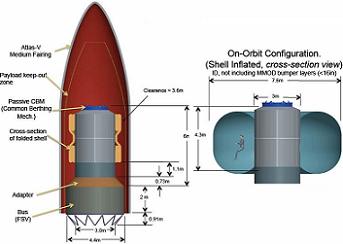 The BEAM will likely be installed onto the Node 3 module of the ISS, as this is the only module capable of accommodating the BEAM due to the limited number of berthing ports available on the ISS for expansion.

That leaves only Node 3 with any available CBM ports for expansion, however both the Node 3 Forward and Zenith ports are unusable due to very tight clearances with the P1 and Z1 Trusses, respectively. As such, Node 3 Aft is the most likely location for the BEAM.

The Node 3 Aft location will also afford the BEAM some additional Micro Meteoroid Orbital Debris (MMOD) protection, by “trailing” it behind both Node 3, and the Japanese Pressurised Module (JPM), which will both bear the brunt of oncoming debris. 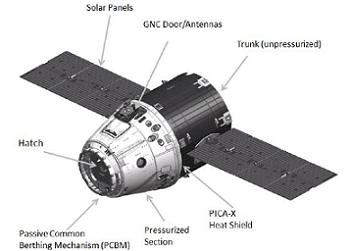 However, the BEAM will have to be removed from the Node 3 Aft port eventually, likely to be disposed of in the Trunk of a departing SpaceX Dragon vehicle.

BEAM’s removal from the Node 3 Aft port would be required in order to make way for the Permanent Multipurpose Module (PMM) to be relocated to Node 3 Aft from its current location at Node 1 Nadir.

The above plan is only preliminary at this time however, and has yet to be officially confirmed by NASA or Bigelow.

That information includes notes that BEAM would be an inflatable module attached to ISS for the purposes of studying the on orbit response of an inflatable. It would be similar in size to the previous Galaxy design, basically a Genesis but more “pumpkin” shaped.

This would be a very simplified element of hardware to minimize integration cost, but would include a battery powered sensor system, with a closed hatch system only opened for data download.

The module – with a mass of less than 1,000kg – would have no independent power and no ECLSS (Environmental Control Life Support System).

Interestingly, the notes add that the module could be small enough to allow for a possible transport inside the unpressurized Dragon trunk, based on early concept designs that showed it was small enough to fit inside the Japanese HTV – with the JAXA spacecraft also a potential launch option.

Bigelow are expected to announce they are at least two years away from delivering the module for launch. Boeing are expected to handle the ISS integration side of the campaign.