The continuing success of NASA’s Kepler mission was highlighted on Monday, following the discovery of 461 new planet candidates – four of which are less than twice the size of Earth and orbit in their sun’s habitable zone. Scientists believe it’s just a matter of “when” a twin of our own planet is found by the spacecraft.

The Kepler spacecraft – a telescope designed to search for Earth-like terrestrial planets in the Cygnus and Lyra constellations – was launched on a Delta II launch vehicle from Cape Canaveral Air Force Station back in March, 2009.

Kepler was inserted into an Earth-trailing heliocentric orbit – a solar orbit that trails the Earth by an increase of one week per year. As such, Kepler completes one revolution of the sun every 372.5 days (~53 weeks) – one week longer than that of Earth’s heliocentric orbit. 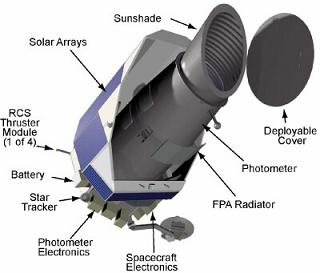 Dedicated to the detection and study of extra-solar terrestrial planets that orbit their parent stars inside the habitable zone, the Kepler mission is the first in proposed series of missions that will study the characteristics of Earth-like extra-solar planets.

The habitable zone – or an area where water can exist in its three forms (most importantly in a liquid state) – is the main area of interest for Kepler and its science team, with Kepler’s main objective to determine whether rocky planets are a common natural formation.

Unlike previous observations conducted by orbital and ground-base telescopes, Kepler looks at a swath of the sky roughly equivalent to the size of one’s hand if held at arm’s length.

This area of observation yields approximately 156,000 stars for Kepler’s science team to monitor for any trace of the tell-tale “dimming” effect caused when a planetary body passes in front of its parent star – a detection method known as the transit method of discovery.

It didn’t take long for Kepler to prove itself as a pivotal component of NASA’s desire to understand extra-solar system dynamics and planet frequency in star systems in our “local” part of the Milky Way Galaxy.

Within the first 43-days of observation, scientific data from Kepler, combined with follow up observations from ground-based telescopes, confirmed the discovery of five new exoplanets – including the now well-known Kepler-7b.

Following this formal announcement, the next significant Kepler data release occurred on June 15, 2010 when it was revealed that Kepler’s data had identified 706 stars “from its first data set (that) have exoplanet candidates with sizes from as small as that of the Earth to larger than that of Jupiter.

The June 15 – “Characteristics of Kepler Planetary Candidates Based on the First Data Set: The Majority are Found to be Neptune-Size and Smaller” – report only released information on 306 of these exoplanet system candidates. Data on the remaining 400 stars was released in February 2011. 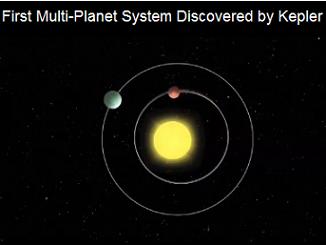 On August 26, 2010 Kepler scientists announced another unprecedented discovery – the confirmation of two new exoplanets orbiting the same star as discovered via the transit method of detection.

As NASA reported, the tell-tale transit signatures of two planets were seen in the data beamed back from Kepler.

The two planets, orbiting a star dubbed Kepler-9 located approximately 2,300 light years from Earth, have been designated Kepler-9b and 9c and were discovered over a seven month observational period.

The transit method of detection, which measures the “dimming” of a star’s apparent light as an exoplanet passes between the star and Earth (Kepler in this case), is used in addition to planetary discovery to determine the size of any confirmed exoplanets by measuring the amount of “dimming” during transit. 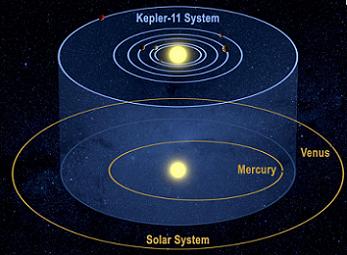 Kepler has kept up the pace since, with the end of 2012 showing the space telescope has helped to provide confirmation of 817 planets around 642 stars – with 2,320 Kepler planetary candidates awaiting confirmation.

Now, kicking off 2013 – with the mission extended past its original three year plan – Kepler’s team announced the discovery of 461 new planet candidates, with four of the potential new planets are less than twice the size of Earth and orbit in their sun’s habitable zone.

Based on observations conducted from May 2009 to March 2011, the findings show a steady increase in the number of smaller-size planet candidates and the number of stars with more than one candidate.

“There is no better way to kickoff the start of the Kepler extended mission than to discover more possible outposts on the frontier of potentially life bearing worlds,” said Christopher Burke, Kepler scientist at the SETI Institute, who is leading the analysis.

“The large number of multi-candidate systems being found by Kepler implies that a substantial fraction of exoplanets reside in flat multi-planet systems,” said Jack Lissauer, planetary scientist at NASA’s Ames Research Center. “This is consistent with what we know about our own planetary neighborhood.”

Scientists believe they are on track to find a planet that mirrors Earth, with the only question being “when”.

“The analysis of increasingly longer time periods of Kepler data uncovers smaller planets in longer period orbits – orbital periods similar to Earth’s,” said Steve Howell, Kepler mission project scientist at Ames. “It is no longer a question of will we find a true Earth analogue, but a question of when.”

Marking the success of the mission so far, Monday also saw the announcement by the National Academy of Sciences that William Borucki, science principal investigator for NASA’s Kepler mission at Ames Research Center is the recipient of the 2013 Henry Draper Medal.

Borucki is honored for his founding concept and visionary leadership during the development of Kepler, which uses transit photometry to determine the frequency and kinds of planets around other stars.

“This is a commendable recognition for Bill Borucki and the Kepler mission,” said John Grunsfeld, associate administrator for the Science Mission Directorate at NASA Headquarters in Washington. “It is well deserved and a tribute both to Bill’s dedication and persistence and the fantastic and exciting results from Kepler.”