Attempts to launch the KSLV-1 in October and November of last year both suffered from scrubs, firstly due to fuel leak between the vehicle’s first stage and the ground support equipment on the pad, before the vehicle’s upper stage put pad to the next attempt due to a steering mechanism issue.

The successful launch follows two previous failed attempts in 2009 and 2010.

The 2009 attempt saw the rocket launch without issue, before a faulty release mechanisms on the second stage prevented the proper deployment of the satellite.

The 2010 failure was more dramatic, with the vehicle exploding two minutes into its first stage ascent.

This third successful attempt marks South Korea as the 13th nation to successfully launch a rocket from their home soil. 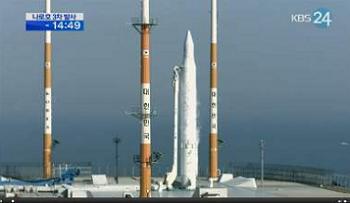 The rocket’s history ranges back to a 2004 agreement between Korea and Russia to jointly develop and build a space booster complex for the KSLV-1 launch vehicle. This agreement came to an end via the success of Wednesday’s launch.

The first stage of KSLV-I was developed and fabricated in Russia while the second stage and payload were designed and built in South Korea.

South Korean media claim it took nearly 200 national institutes and companies, including the Korea Aerospace Research Institute, to build the second-stage rocket of the Naro-1. The space program has so far cost 520 billion won (US$ 471 million). 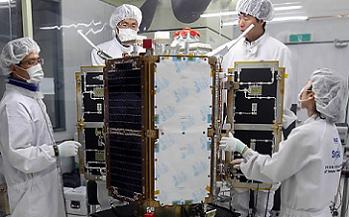 The 100-kg satellite is a test spacecraft with a short lifespan of less than one year. It was designed solely to verify the country’s ability to put a satellite into orbit.

The nine minute flight to orbit began with the launch of KSLV-1, which then performs a “kick-turn” and veers south 900m above launch pad.

Fairing jettison occurred at T+3:36 at an altitude of 177km – and 245km downrange – followed 12 seconds later by staging.

At T+7:33 into the flight, the second stage shut down, as STSAT-2C reached the correct trajectory for a stable orbit at an altitude of 300km. 90 seconds later, the STSAT-2C was separated, prior to deploying its solar arrays.

South Korea have made bold claims as to their space flight ambitions, with a goal to develop an indigenous 75 ton thrust engine by 2018 and a 300-ton launch vehicle by 2021.

(Images via Korean TV and Yonhapnews).