Arianespace have launched their first Ariane 5 of the year, lofting two satellites into orbit – Amazonas-3 and Azerspace-1 – from the European Spaceport in Kourou, French Guiana. The launch was on schedule at the opening of a 44 minute window at 21:36 UTC on Thursday.

As such, Ariane 5 flights carry the “VA” designation, followed by the flight number. The “V” stands for “vol,” the French word for “flight,” while the “A” represents the use of an Ariane launch vehicle.

This flight was designated Flight VA212 in Arianespaces numbering system, representing the 212th mission of an Ariane family launcher since the maiden liftoff of an Ariane 1 version in 1979. The launch was also the 68th Ariane 5 liftoff.

The total payload performance for this mission was approximately 10,350 kg – which includes the two satellite passengers and their integration hardware for Ariane 5′s dual-payload deployment system. 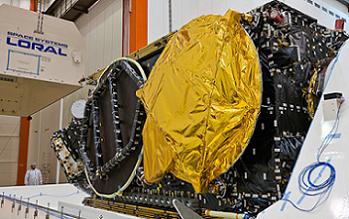 Riding in the upper position of Ariane 5’s payload “stack” is Amazonas 3 – the seventh Spanish satellite to be launched by Arianespace.

The 6,265-kg.-class relay platform is equipped with 33 Ku-band and 19 C-band transponders, along with nine Ka-band spot beams, and has been designed to provide telecommunications relay services.

The satellite will help with the capacity demands during the 2014 World Cup in Brazil – the world’s biggest sporting event, which gains billions in TV viewers.

Azerspace/Africasat-1a is located in the lower portion of Ariane 5’s payload stack, and it carries 24 C-band transponders and 12 Ku-band transponders to deliver communications coverage for Azerbaijan, Central Asia, Europe and Africa. 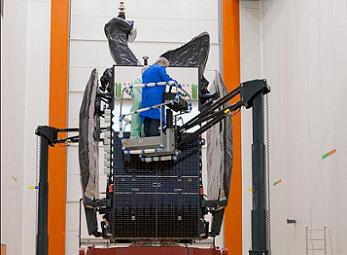 Produced by Orbital Sciences Corporation under contract to the Republic of Azerbaijan’s Ministry of Communications and Information Technologies for satellite operator Azercosmos, it will be the initial satellite orbited by Arianespace for this nation situated in the Caucasus region.

The satellite is based on Orbital’s STAR-2 platform with a designed mission life of 15 years.

A total of six Ariane 5 flights are scheduled from the Spaceport this year, along with four medium-lift Soyuz launches and one with the light-lift Vega.

In addition, Arianespace opened their 2013 campaign with the launch of the final batch of six satellites for Globalstar’s second-generation constellation on a Soyuz mission from Baikonur Cosmodrome, under the flag of the company’s Starsem affiliate.