Lockheed Martin engineers have completed the assembly of NASA’s Mars Atmosphere and Volatile EvolutioN (MAVEN) spacecraft, ahead of shipping to the Kennedy Space Center in August. MAVEN is scheduled to launch towards Mars in November – where it will study the Martian upper atmosphere.

MAVEN is a robotic exploration mission to understand the role that loss of atmospheric gas to space played in changing the Martian climate through time. It will investigate how much of the Martian atmosphere has been lost over time by measuring the current rate of escape to space and gathering enough information about the relevant processes to allow extrapolation backward in time.

MAVEN’s principal investigator is based at the University of Colorado at Boulder’s Laboratory for Atmospheric and Space Physics. The university will provide science operations, science instruments and lead Education/Public Outreach. NASA’s Goddard Space Flight Center manages the project and provides two of the science instruments for the mission.

The University of California at Berkeley Space Sciences Laboratory provides science instruments for the mission. NASA’s Jet Propulsion Laboratory (JPL) – famed for their Martian missions, are providing navigation support, the Deep Space Network and the Electra telecommunications relay hardware and operations for this effort.

The orbiter is being built at Lockheed Martin’s Littleton facility in Colorado. The company will also be responsible for the spacecraft’s mission operations. 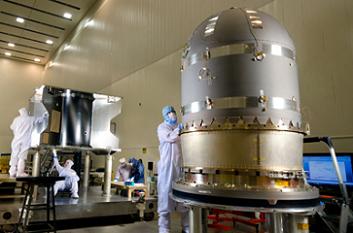 “The assembly and integration of MAVEN has gone very smoothly and we’re excited to test our work over the next six months,” said Guy Beutelschies, MAVEN program manager at Lockheed Martin Space Systems Company. “Environmental testing is a crucial set of activities designed to ensure the spacecraft can operate in the extreme conditions of space.”

During the environmental testing phase, the orbiter will undergo a variety of rigorous tests that simulate the extreme temperatures, vacuum and vibration the spacecraft will experience during the course of its mission.

Currently, the spacecraft is in the company’s Reverberant Acoustic Laboratory being prepared to undergo acoustics testing that simulates the maximum sound and vibration levels the spacecraft will experience during launch. 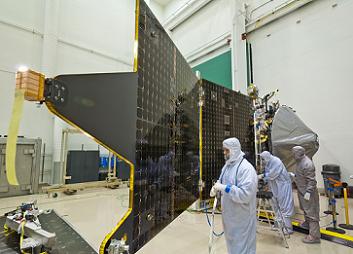 “I’m very pleased with how our team has designed and built the spacecraft and science instruments that will make our measurements,” added Bruce Jakosky, MAVEN principal investigator from the University of Colorado at Boulder’s Laboratory for Atmospheric and Space Physics.

“We’ve got an exciting science mission planned, and the environmental testing now is what will ensure that we are ready for launch and for the mission.”

The phase concludes with a thermal vacuum test where the spacecraft and its instruments are exposed to the vacuum and extreme hot and cold temperatures it will face in space.

“This phase of the program is particularly important in that it will provide us with a good assessment of the MAVEN system’s capabilities under the simulated extremes of the space environment,” noted David Mitchell, MAVEN project manager at NASA’s Goddard Space Flight Center. 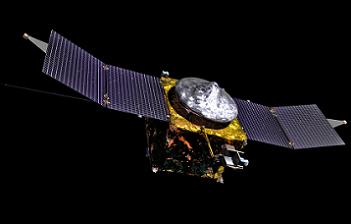 “Of significance, the spacecraft is entering system level test right on schedule, while maintaining robust cost and schedule reserves to deal with the technical or programmatic surprises that could occur during test or in the run to launch. Tracking on plan is critically important to being ready for launch later this year and the science that MAVEN will deliver one year later.”

MAVEN is scheduled to ship from Lockheed Martin’s facility to NASA’s Kennedy Space Center in early August where it will undergo final preparations for launch – scheduled for November.

The spacecraft will be launched by the United Launch Alliance (ULA) Atlas V, utilizing its 401 configuration. 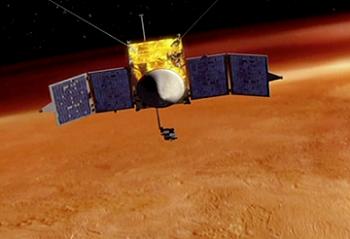 MAVEN is scheduled to conduct operations over a one year mission period, although that could be extended based on the health of the spacecraft.

“This mission will provide the first direct measurements ever taken to address key scientific questions about Mars’ evolution,” noted Doug McCuistion, director of the Mars Exploration Program at NASA Headquarters in Washington.

“The loss of Mars’ atmosphere has been an ongoing mystery. MAVEN will help us solve it.”

(Images via Lockheed Martin and NASA).