An Soyuz 2-1A has successfully deployed six Globalstar communications satellites into orbit on Wednesday on behalf of Arianespace and Starsem. Liftoff was on schedule at 16:04 UTC from the Baikonur Cosmodrome in Kazakhstan. This was the last of four launches for the second generation Globalstar satellites.

Globalstar provides coverage of the Americas, Europe, parts of Russia and Asia, Australia and New Zealand. When completed, the second generation network of satellites will be made up of 32 operational satellites in circular orbits 1,414 kilometres in altitude, inclined at 52 degrees to the equator. 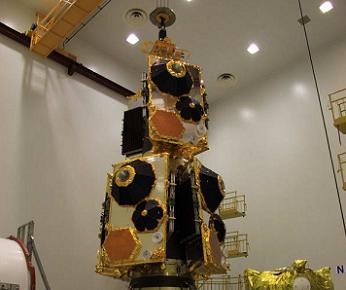 Launches of second-generation Globalstar satellites began in October 2010, and Wednesday’s launch was the fourth and final group of six satellites to be placed into orbit.

Launches were conducted in groups of four, on Delta II and Soyuz rockets, with a single launch of twelve satellites on a Zenit-2, however the Zenit launch failed. The first-generation satellites were built by Space Systems/Loral, based around the LS-400 bus, with a communications payload built by Alenia Spazio. The constellation consisted of forty eight operational satellites, and four spares.

Including the twelve satellites which failed to achieve orbit, this resulted in sixty four being launched between 1998 and 2000, by means of seven Delta II 7420, and six Soyuz-U/Ikar rockets. The satellites had a design life of seven and a half years, and in 2007 eight replacement satellites were launched using Soyuz-FG/Fregat rockets.

The third Globalstar launch, conducted on 9 February 1999, marked the first commercial launch of the Soyuz rocket, and the first launch to be conducted by Starsem; the company conducting Wednesday’s launch.

That Soyuz flew in the Soyuz-U/Ikar configuration, using an older version of the Soyuz rocket, and an upper stage derived from the Yantar reconnaissance satellite. The Ikar upper stage was short-lived; it was only used for the six Globalstar launches before being retired in favour of the Fregat. 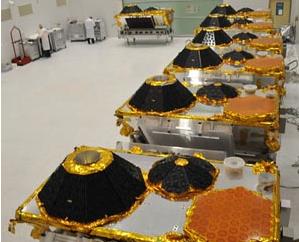 The new Globalstar satellites were constructed by Thales Alenia Space, under a contract signed in 2006, and are each equipped with sixteen transponders operating in the C and S bands of the IEEE spectrum (E-H bands of the NATO spectrum).

Each spacecraft generates power by means of two solar arrays, which can produce 2.4 kilowatts of power. Three-axis control is used to ensure that the satellites retain the correct attitude for relaying communications and orienting their solar arrays towards the sun. The satellites are expected to operate for fifteen years.

The launch was delayed by one day due to unacceptable high altitude winds ahead of the initial launch attempt on Tuesday. 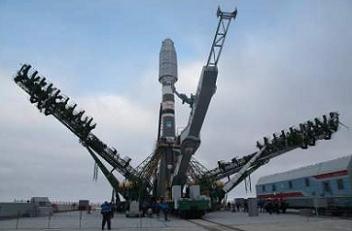 Soyuz-2 is a modernised variant of the Soyuz rocket, itself a derivative of the R-7 Semyorka, the world’s first intercontinental ballistic missile. The R-7 made its first flight in 1957, and a modified version was used to launch Sputnik 1, the first artificial satellite, later that year. In addition to Soyuz, the R-7 has served as the basis of the Vostok, Molniya and Voskhod rockets as well as several other variants which made small numbers of flights.

Vostok rockets launched early Soviet manned spaceflights, reconnaissance satellites, and a modified version launched the first Soviet lunar probes. Molniya was used to launch missions beyond Earth orbit, as well as military, communications and scientific satellites into high Earth orbits. The Voskhod rocket, which first flew in November 1964, was the predecessor to the Soyuz. It incorporated the Blok I third stage developed for the Molniya rocket, powered by an RD-0108 engine. Voskhod was used to launch reconnaissance satellites, and missions of the manned Voskhod programme.

The Soyuz, meaning “Union”, first flew on 28 October 1966. Derived from the Voskhod, it incorporated upgraded engines, including an RD-0110 on the third stage, as well as a lower-mass and improved telemetry system. The original Soyuz was used exclusively for launches of Soyuz spacecraft, both manned and unmanned. Not including one which exploded on its launch pad after its launch had been delayed, thirty one were launched, the last of which flew in 1975 carrying the Soyuz 23 spacecraft.

Between 1970 and 1971, three Soyuz-L rockets were launched, incorporating reinforcements to the core stages and a larger payload fairing to accommodate prototypes of the LK spacecraft, the spacecraft the Soviet Union intended to use to land men on the Moon. Another Soyuz variant, the Soyuz-M, was developed to launch the Soyuz 7K-VI; the military version of the Soyuz spacecraft, which was heavier than the civilian version.

After the cancellation of the military Soyuz programme, eight Soyuz-M rockets were used to launch Zenit-4MT reconnaissance satellites, with launches occurring between 1971 and 1976.

The Soyuz-U was developed as a standardised launch system, to replace the Voskhod and Soyuz and provide commonality with the Molniya-M. It first flew in May 1973, and in 1976 the original Soyuz, Soyuz-M and Voskhod were all retired, with subsequent launches of their payloads being conducted by Soyuz-U rockets. The Soyuz-U2 configuration, which was optimised to use synthetic propellant allowing it to carry more payload, was introduced in 1982, and used for around 90 launches before being retired in 1995.

In 2001, the Soyuz-FG, which featured a new fuel injection system, was introduced, providing an increased payload capacity. After three test flights carrying Progress spacecraft, the Soyuz-FG began launching manned Soyuz-TMA spacecraft to the ISS, a role which it continues to perform.

The Soyuz-2 features modernised engines and digital flight controls. There are three different configurations; the Soyuz-2-1a, 2-1b and 2-1v, with the 2-1a and b using different third stage engines. 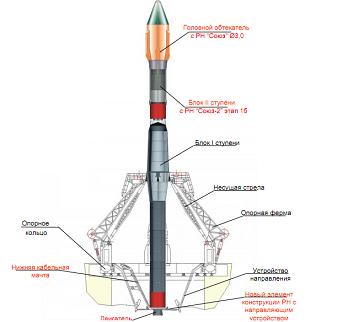 The Soyuz-ST is a derivative of the Soyuz-2 optimised for launching from the Centre Spatial Guyanais, and equipped with a self-destruct system to meet range safety requirements there. The Soyuz-ST made its first launch in October, and can fly in two configurations; the Soyuz-STA and STB, based on the Soyuz-2-1a and 2-1b respectively.

The Soyuz-2 made its maiden flight in 2004, in the Soyuz-2-1a configuration. It carried an obsolete Zenit-8 reconnaissance satellite, refitted with test instrumentation, on a suborbital trajectory. It is not entirely clear whether the mission was intended to be suborbital, or whether the rocket actually failed to achieve orbit. The first launch into orbit occurred in October 2006, when a Soyuz-2-1a/Fregat deployed the MetOp-A weather satellite.

The Soyuz-2-1b made its maiden flight later the same year, carrying the COROT exoplanet detection satellite.

Under Russian stage numbering, the booster rockets which augment the core stage’s thrust during the first 118 seconds of flight are considered to be its first stage, even though the core, or second stage, ignites at the same time. The first stage consists of four strap-ons, designated Blok-B, V, G and D, which are powered each powered by an RD-107A engine.

The first stages are attached around the second stage, or Blok-A, which is powered by a single RD-108A. All of the first three stages of the Soyuz burn RP-1 propellant, using liquid oxygen as an oxidiser. 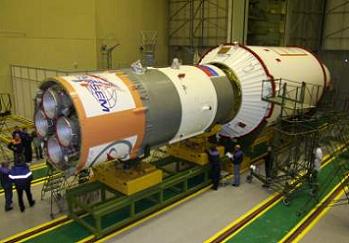 The Fregat upper stage, which is propelled by unsymmetrical dimethylhydrazine and nitrogen tetroxide fuelling an S5.98M engine, will be used to place the Globalstar satellites into their target orbit. The Fregat has been used as a fourth stage on Soyuz-U, Soyuz-FG and Soyuz-2 rockets, and also as the third stage of the Zenit-3F. The version being used on Wednesday is the Fregat-M.

Fregat made its first flight in first flew in 2000, on a Soyuz-U rocket carrying the IRDT inflatable heat shield experiment. The Fregat was also equipped with a prototype heat shield, and was intended to be recovered if possible; however it could not be found after reentry. The heat shield was a one-off on the test flight; Fregats are generally allowed to burn up in the atmosphere.

This launch was  the 26th performed by Starsem since beginning operations at Baikonur Cosmodrome in 1999 on a historic introductory commercial Soyuz flight also at the service of Globalstar – carrying four of its first-generation constellation satellites.

(Images via Starsem, Arianespace, and L2).