The Golden Spike company are to host an international scientific workshop in October, aimed at evaluating the details of their commercial lunar expeditions. With a focus on the potential to conduct science missions on the Moon, the workshop will also evaluate potential landing sites.

The company, formed in 2010, is led by Board Chair Gerry Griffin – a former Director of Johnson Space Center and Apollo Flight Director – and President/CEO Alan Stern, the well-known Planetary scientist, and former head of all NASA science missions.

Their aim is to provide a commercial option for individuals who wish to step foot on the Moon.

They are currently in the early phase of their drive, relating to hardware and mission architecture – with a funding drive targetting public support to foster seed money towards that goal.

The multi-billion dollar project will be mainly funded by customers booking missions that are set to become available by 2020 – following a test program that should begin in 2017.

Announcing a two-day seminar – that will be held at the Lunar and Planetary Science Institute (LPI) in Houston, Texas, on October 3rd and 4th, 2013 – the sessions will be organized around topical themes, invited presentations, and discussion panels. 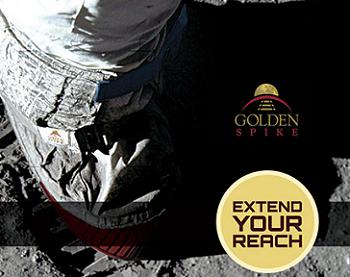 “We’re excited to announce this workshop, which will seek input from lunar researchers from across the world regarding scientific priorities for Golden Spike expeditions. We also expect this workshop to multiply interest in our missions from science and space agencies across the globe.” said Dr. Stern.

As to where the first lunar mission will land, no decisions have been taken at this time. Regardless, the company noted they will have access to large areas of the near side of the Moon via their initial capability, with specific destinations to be customer-driven.

The evaluation of potential landing sites for Golden Spike missions will be of key interest at the seminar, not least if they note customer interest in visiting the sights of historical interest – such as the Apollo landing sites. 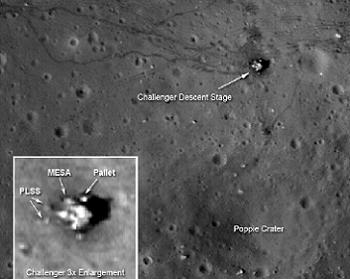 NASA’s Lunar Reconnaissance Orbiter (LRO) produced the sharpest images ever taken from space of the Apollo 12, 14 and 17 landing sites back in 2011.

The images show the actual footprint paths made when the astronauts explored the lunar surface during the Apollo missions.

The images arrived shortly after an expansive internal NASA presentation – available on L2 – was debated at a NASA Staff Senior meeting, which discussed the protection of the heritage sites from future landers and robotic vehicles. 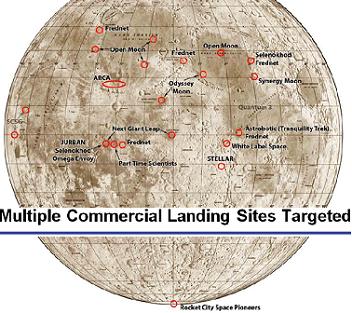 Such new arrivals in the near future include private robotic landers, such as those competing for the Google Lunar X PRIZE (GLXP) – as heavily referenced in the associated NASA presentation – and the potential of Golden Spike landers.

The GLXP has a prize fund of $30 million available to the first privately funded teams to safely land a robot on the surface of the Moon, have that robot travel 500 meters over the lunar surface, and send video, images and data back to the Earth.

There are currently 29 teams working on winning the GLXP, with $20 million on offer for the winner. The targeted landing sites for these teams are located all around the lunar surface.

The presentation was created before Golden Spike went public with their own aspirations of returning humans to the Moon.

According to the NASA presentation there is scientific interest in visits to the Apollo sites, allowing for the collection of data on items such as dust transportations, Micrometeorite bombardment rates, sandblasting effects, the survival of microbes and Lunar Weathering.

“To characterize the effects on engineered materials following four decades of exposure to the lunar environment,” the presentation noted on the latter scientific item of interest.

However, there is a concern relating to the possible mechanisms of damage to the aforementioned “scientifically interesting data” as NASA worded it. 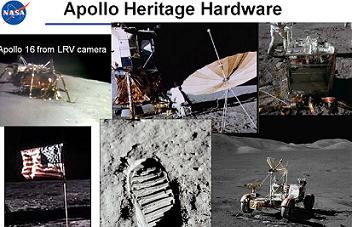 Fears include the proximity of landing, liftoff and flyover from a future landing/robotic vehicle, where rocket thrust may erase footprints and treads, sandblast nearby hardware and cause deposition of chemicals/dust.

There are also concerns relating to robotic rovers accidentally running over the footprints created by Apollo astronauts, or contaminate a site via physical contact with heritage hardware.

One of the worst case scenarios listed relates to the potential of Entry, Descent and Landing (EDL) errors, resulting in a “crash or off-nominal landing near a heritage site which may produce enormous amounts of debris, dust, chemical contamination, and possible biological contamination.” 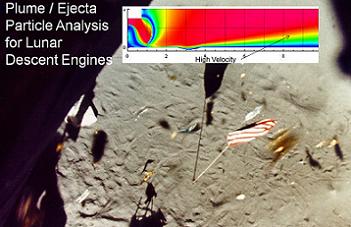 Some data is already at hand via the actual Apollo missions, such as the “Plume/Ejecta particle analysis for Lunar Descent Engines” findings, which show the descent engines create a high velocity of horizontal flow across the lunar surface.

The data – as presented in the NASA document – notes that the force creates a “relatively flat sheet of dust – 1-3 degrees to surface – with particles lifted by aero forces. Total eroded and scouring volume is around two metric tons in volume, with dust velocities reaching as high as 2000 meters per second.” 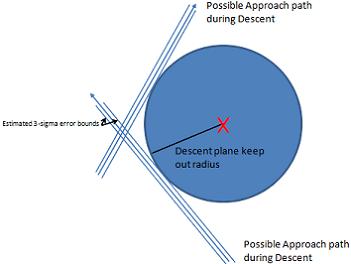 As such, NASA created a set of recommendations for preserving/protecting the USG Lunar Artifacts, relating to three categories, ranging from the six Apollo sites, the unmanned soft-landing sites of Surveyor and Luna, and through to the impact/crash sites of Ranger and the expended S-IVB stages.

Among the recommendations cited in the presentation, the arrival of future craft – such as the GLXP or the Golden Spike lander vehicles – should follow certain flight rules, in order to provide protection for the heritage sites.

“The approach path for the Descent/Landing (D/L) trajectory should be tangential to the D/L boundary in order to protect the site from off-nominal descent/landing situations,” the document noted. “The visiting vehicle should ensure no overflight of the heritage sites.”

The recommendations add additional emphasis for the Apollo 11 and Apollo 17 sites, making reference to a “Keepout Zone”. 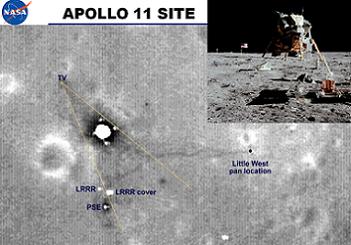 “While all the Apollo sites represent significant historical/heritage value in the material culture, the Apollo 11 and 17 landing sites carry special significance,” added the presentation.

“It is recommended that the sites for Apollo 11 and 17 be treated as unique by prohibiting visits to any part of the site (and) that all vehicles remain beyond the boundaries of the entire site.

“It is recommended that the entire site at Apollo 11 and 17 be restricted from close inspection by visiting robotic systems. The visiting vehicle mobility exclusion boundary will encompass all artifacts (hardware, footprints, etc) for this site.”

The exclusion zone for Apollo 11’s site will result in a keep-out zone of 75 meters from the lunar module descent stage, where as the zone will extend 200-225 meters from the Apollo 17 site. 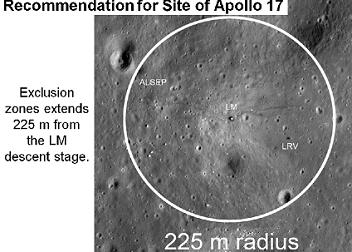 However, for the Apollo 12, 14, 15 and 16 sites, more access should be provided to individual components and artifacts, NASA added, allowing for future robotic missions to get within touching distance of Apollo hardware – as much as they won’t be allowed physical contact. This also opens up the potential for “tourist expeditions” to actually view the sites on a Golden Spike mission.

This additional access is shown as buffer zones, with a three meter buffer for descent stages, one meter buffer distance for the Lunar Rovers, experiments, sampling sites and flags, while no restrictions are recommended on the footprints and rover tracks outside the identified keep-out zones.

These buffer zones will also apply to other spacecraft, such as a one meter buffer around all Surveyor spacecraft hardware. A ruling is also provided for the expended S-IVB stage impact site.

“Rovers may drive to the rim of the crater and observe,” added the presentation. “Entrance into the crater may be permissible with coordination with NASA, but may not disturb any debris.” 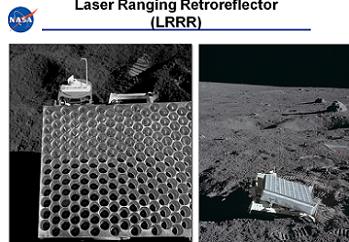 An additional note on the restrictions at the Apollo 12, 14-16 sites, is also listed, relating to the Laser Ranging Retro-Reflectors (LRRRs), which the presentation notes should be carefully preserved.

“The LRRRs should be treated as special cases with approach mobility being tangential to the site. Once within a 10 meter radius zone of the LRRR, mobility can only proceed at speeds that do not propel regolith particles forward of the rover up to the total exclusion zone of one meter radius around the retro-reflector.

“Direct approach to the LRRR should never occur.”

Several pages of additional rules and allowances are listed for landers in the hopper configuration, along with the potential that the GLXP – or other – missions may provide additional science opportunities and data to use in refining their rulings.

As such, NASA class the recommendations as an evolving document, based on early, small landers with imaging only. Such lander capabilities are likely to advance over the short-term.

Forward work will also include analysis on rocket exhaust interaction with the lunar regolith to attempt to reduce the D/L distance.

Although Golden Spike are not officially working with NASA, should they begin actual flights to the lunar surface, the company’s mission data will likely be of great interest to the Agency.

( NSF and L2 are providing full transition-to-the-future level coverage, available no where else on the internet, from Orion and SLS to ISS and COTS/CRS/CCDEV, to European and Russian vehicles.