JUPITER 2/EchoStar XIX is a large, multi-spot beam Ka-band satellite based on the highly reliable SSL 1300 space-proven platform, which provides the flexibility to support a broad range of applications and technology advances.

The 1300 series platform was first introduced in the mid-1980s and has been in constant evolutionary development to deliver increasingly higher power, greater flexibility and longer mission life. 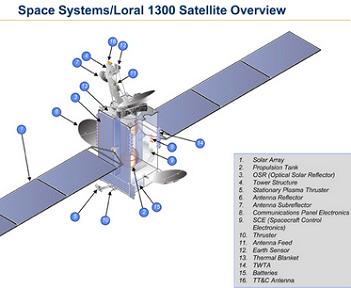 The platform has a total satellite power capability ranging from 5 to 25 kW continuously throughout the life of the spacecraft, and can support from as few as 12 active transponders to as many as 150 transponders.

The company manufactures the 1300 in Palo Alto, California. Integration of components into payload and bus subsystems, as well as satellite system-level testing, are all performed in this location.

The new satellite will have 50 percent more capacity than JUPITER1/EchoStar XVII – employing a multi-spot beam, bent-pipe Ka-band architecture – which was launched in July, 2012 by an Ariane 5 ECA rocket from the European Spaceport in Kourou, French Guiana.

JUPITER 1/EchoStar XVII was part of a dual launch, riding uphill with the Meteosat Second Generation-3 (MSG-3) satellite, although JUPITER 1 made up the bulk of the upmass, weighing in at 7,500 kg.

“Hughes is a pioneer in providing satellite broadband to the consumer market and there is an excellent spirit of teamwork between our companies,” said John Celli, president of SSL. “JUPITER 2/EchoStar XIX will be the highest capacity broadband satellite ever built, as a result of technology advances from both our companies.”

The satellite is designed to provide service for 15 years or longer and is planned to be launched on an Ariane 5 ECA in mid-2016.

“We are very glad to once again work with SSL’s innovative use of spotbeam technology to leapfrog prior capabilities,” said Pradman Kaul, president of Hughes. “EchoStar XVII is performing very well on orbit and record growth of our HughesNet Gen4 high-speed Internet service has given us the confidence that we need for continued fleet expansion.” 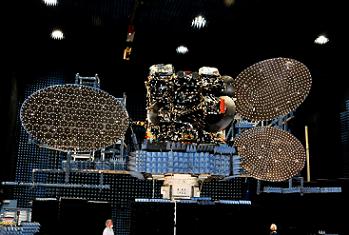 SSL also announced their Anik G1 satellite – designed and built for Telesat – has arrived at the Baikonur Cosmodrome in Kazakhstan this week.

This satellite – again using the 1300 platform – will be launched aboard a Proton Breeze M vehicle provided by International Launch Services (ILS).

Anik G1 is a multi-mission satellite with three different payloads. It will provide service in Canada and South America and has an X-band payload for government communications over the Americas and the Pacific Ocean.

When launched, Anik G1 will be positioned at 107.3 degrees West longitude where it will be co-located with Telesat’s Anik F1 satellite, effectively doubling both the C-band and Ku-band transponders serving South America from the 107.3 degrees West orbital location.