SpaceX’s CRS-2 (SpX-2) Dragon achieved another milestone on Wednesday, as the Space Station Remote Manipulator System (SSRMS) carefully removed a pair of grapple bars from the spacecraft’s trunk. The robotic operation marked another first – the delivery of unpressurized cargo from a commercial spacecraft to the ISS.

The SpaceX spacecraft is now enjoying an issue-free mission, following the swift resolution of problems relating to its propulsion system, an issue that occurred just minutes into its mission. 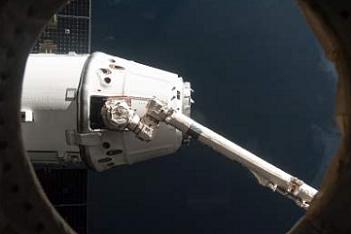 All four of Dragon’s “Quads” – each of which consist of a set of manuevering thrusters – were returned to full working order before the end of Flight Day 1, allowing for the spacecraft’s arrival at the ISS last Sunday, just a day later than originally planned. (Image left via L2’s stock of hundreds of unreleased hi res CRS-2 photos).

Rendezvous and berthing – operations that require at least three of the Quads to be in a nominal condition – were conducted without issue, as Dragon took up residency on Node 2.

Evaluations into a root cause of the Quads issue – likely related to either a blockage or a stuck valve in the helium pressurization line – are continuing, with a focus on ensuring a smooth departure and deorbit for Dragon at the end of its ISS stay.

It is understood that NASA and SpaceX teams will conduct a meeting to evaluate contingency plans in the event the problem reoccurs when the Quads are required again during departure and deorbit operations, per standard procedure. Unberthing, re-entry and splashdown are all scheduled to take place on March 25.

With Dragon’s pressurized cargo already offloaded by the ISS crew, preparations moved towards the use of the Station’s “big arm” for a debut operation involving the Dragon – the removal of the unpressurized cargo, located in the “trunk” of the spacecraft. 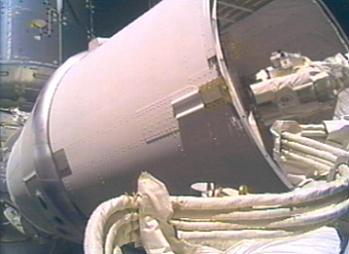 The opening requirement called for a visual survey of the Dragon’s aft via cameras on the end of the SSRMS, mainly to ensure the trunk and payload were in an undamaged state, following their journey to the orbital outpost.

“MT (Mobile Transporter) was translated from WS2 (Worksite) to WS5. Then the SSRMS walked-off from Node 2 PDGF (Power Data Grapple Fixture) to MBS PDGF 4 to Lab PDGF and back to Node 2 PDGF,” noted L2’s Rolling ISS Updates. “At the end of the shift, the SSRMS was positioned at the start position of the Dragon trunk survey.

“The tip elbow and LEE (Latching End Effector) cameras were configured to provide initial views of the Dragon trunk. All operations were nominal. the Dragon Trunk survey was successfully performed. The survey confirmed that the trunk was in the expected configuration.” 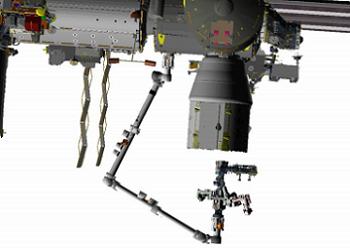 Dragon’s trunk is designed to carry additional cargo outside of its pressurized cabin – such as Orbital Replacement Units (ORUs). These payloads will be – for the most part – removed by the Dextre (SPDM) robot over the course of the Commercial Resupply Services (CRS) contract, prior to being translated to staging points on the ISS, such as the External Platforms, ahead of installation via a Stage EVA.

Canada’s Dextre actually paid a visit to the C2+ Dragon during the spacecraft’s debut mission to the Station, testing out clearances and camera views ahead of the future payload removal role. 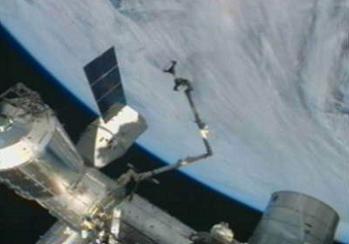 For Wednesday’s operation, only the SSRMS was required, tasked with the removal of two Heat Rejection Subsystem Grapple Fixtures (HRSGFs) – which are essentially bars each featuring two Flight Releasable Grapple Fixtures (FRGFs) – from Dragon’s trunk.

These “grapple bars” will be used to aid in the handling of a stowed ISS radiator in a potential future replacement scenario, by adding grapple fixtures to the radiator for the station’s arm to interface with.

The HRSGFs were successfully removed from Dragon’s Trunk robotically by the SSRMS, whereupon they were installed onto the Payload ORU Accommodation (POA) on the Mobile Base System (MBS) on the ISS Truss, where they will each await respective installation onto the S1 and P1 Truss radiators during a US spacewalk in July.

Later this year, Dragon’s CRS-3 (SpX-3) mission will carry two external payloads in its trunk – the High Definition Earth Viewing (HDEV) and Optical Payload for Lasercomm Science (OPALS). The previously planned Nitrous Oxide Fuel Blend eXperiment (NOFBX) payload has been removed from the SpX-3 flight and has yet to be re-manifested.

The CRS-4 (SpX-4) mission – which will fly in early 2014 – is manifested with the recently announced RapidScat payload in its trunk.

(Share this article – and spread the word of space flight – by using the social media options below).