Europe’s latest space freighter, the Automated Transfer Vehicle-4 (ATV-4), is currently undergoing preparations for a realigned launch date following the replacement of a faulty unit inside the spacecraft. While the primary mission of ATV-4 will be to deliver a large load of cargo and propellants to the International Space Station, it will also help to contribute vital knowledge to the design effort for Orion’s Service Module. 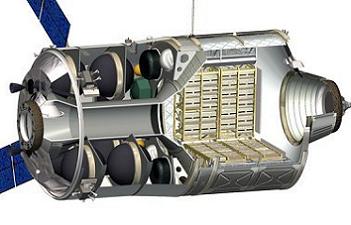 As the ATV has the largest cargo carrying capability of all the ISS Visiting Vehicles (VVs), and also has the ability to perform ISS reboosts, ATV-4 will be carrying a large load of both internal (dry) and propellant (wet) cargo. 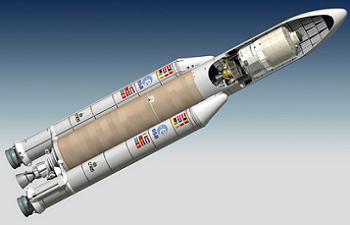 ATV-4 will launch atop an Ariane 5 booster from Europe’s Kourou Space Center in French Guiana, where the vehicle currently resides while undergoing final processing activities.

While ATV-4 was originally scheduled to launch on April 18, that date was pushed back to June 5 due to the failure of an electrical unit in the vehicle.

After the first ICC-SM mating, it was discovered that there was a problem with a connector for a piece of equipment inside the ICC, and due to this issue, the decision was taken to de-mate the ICC from the SM, remove the ICC Aft Access Closure (AAC), and repair the connector. This was performed successfully, and the ICC and SM were put back together in time to support the originally planned docking window.

However, post-mating tests performed following the re-mating of the ICC and SM revealed another problem – the failure of the power supply of a Digital Signal Processing Unit (DSPU) inside the ICC.

This failure required the ATV teams to once again de-mate the ICC and SM, remove the AAC, and Remove & Replace (R&R) the faulty DSPU with a new unit. Once the ICC and SM were put back together again, the new DSPU led to the need to perform a complete re-testing of all interfaces, which was the reason for the delay to June 5.

The problem was described by Alberto Novelli, ATV-4 Mission Manager, in an exclusive Q&A with NASASpaceflight.com: “We had a problem with a connector that was fixed relatively quickly and we could have met the initial docking window. Unfortunately the failure of the power supply of an avionics box inside the ICC was detected during the post-mating tests.

“This required us to un-mate the ATV, re-open the pressurized module and change the unit. After the exchange, a complete re-testing of all interfaces was performed. This is the main reason for the delay.”

Assuming an on-time launch on June 5, ATV-4 is scheduled to dock to the ISS at the Aft port of the Russian “Zvezda” Service Module on June 15, following a ten-day free-flight and rendezvous period.

After a roughly 4.5 month period of “attached phase operations”, during which time ATV-4 will be unloaded of all its cargo, re-packed with trash to be incinerated upon re-entry, and will also provide propulsive support to the ISS for all reboosts and Debris Avoidance Maneuvers (DAMs), ATV-4 is tentatively planned to undock from the ISS on November 4, for a destructive re-entry a short time later.

For the previous ATV mission, ATV-3 in 2012, despite the fact that the vehicle was able to meet 100 per cent of its mission objectives, it suffered from a number of in-flight anomalies, the resolutions for which were detailed in ATV mission readiness sources provided to NASASpaceflight.com. 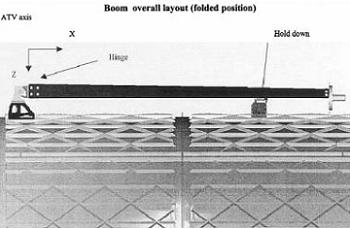 The first anomaly seen on ATV-3 was with the Proximity Communication Boom, which should deploy from the ATV post-launch in order to aid in communication with the ISS, although the ATV can still communicate with ISS without the Boom deployed.

On ATV-1 in 2008, this Boom deployed less than 1 minute following launch, which is the nominal timeframe. 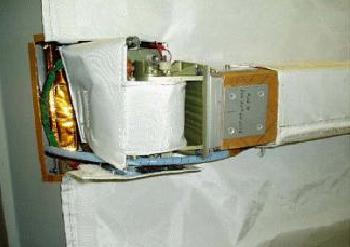 Despite extensive investigations, the ATV teams have been unable to find any reason for these deployment delays, with loose theories being that possible Multi Layer Insulation (MLI) interference could be at play, caused by “ballooning” MLI on ascent as air trapped under the MLI escapes into vacuum.

Thus, slight modifications have been made to the MLI surrounding the Prox Comm Boom on ATV-4, including adding vent holes to prevent the ballooning. Additionally, an opening in the orbital debris shielding around the Boom has been enlarged to prevent interference, and teams have also verified that cabling around the boom will not cause interference. 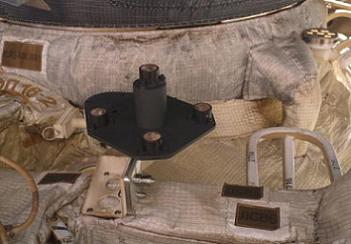 While not technically a failure, a slight issue seen on ATV-3, and indeed ATVs -1 and -2, is increased “noise” in the pitch and yaw values during docking, which have been increasing from one flight to the next. An investigation determined that this “noise” was likely due to contamination or damage on the Laser Retro Reflector (LRR) on the Aft end of the “Zvezda” Service Module.

LRRs are used by the Videometers (VDMs) on the ATV, which are navigational sensors that measure the distance and angles between the ATVs and ISS during docking. Due to the increasing noise and the suspected contamination/damage, the decision was made to replace the LRR during Russian EVA-32 on April 19, a task which was successfully completed.

Alberto Novelli, ATV-4 Mission Manager, again explained the issue exclusively to NASASpaceflight.com: “During the final part of ATV-3 docking, Videometer n.2 (the redundant videometer) saw some noise in the signal received from the inner retroreflector that is installed on the Russian Service Module. This target is used by ATV during the last part of RDV (Rendezvous) operations.” 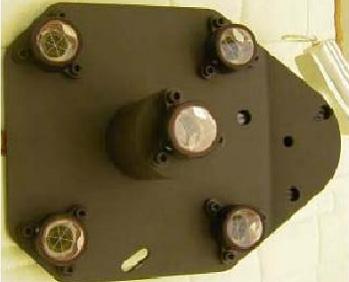 “Investigations concluded that the most probable cause was contamination of the target. The detection of a wrong measurement by the Videometer may result – in extreme cases – in an Escape Manoeuvre, even though the ATV GNC (Guidance, Navigation & Control) is robust with respect to these kinds of perturbations.

“However, in order to eliminate any possibility this scenario occurring, ESA decided to change the target with a new one (i.e. no design change).”

An additional failure seen on ATV-3 was the loss of one of the vehicle’s two redundant power chains, known as the Russian Equipment Control System (RECS), which controls the transfer of power between the ISS and ATV, since ATVs need power provided by the ISS during their docked phase.

While ATV-3’s design redundancy still allowed for 100 percent mission success despite the RICU failure, a full investigation was performed into the failure by the ATV teams. However, following extensive testing and reviews, no design or manufacturing flaw was able to be identified, and since 11 of the 12 RICUs flown over the previous three ATV missions were fault-free, no design changes were made. 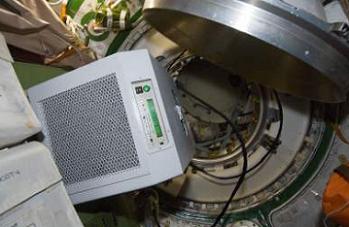 Yet another failure to occur on ATV-3 was the ATV cabin fan, which failed after 96 days of operation. ATV-2’s cabin fan also failed after 100 days.

The failed ATV-3 cabin fan was replaced with a new unit and the old unit was returned to Earth on the SpX-1 Dragon flight for analysis.

Once back on Earth, the cabin fan was disassembled and analyzed, however, again, no design flaw was found.

A spare ATV cabin fan is already available on the ISS, should the ATV-4 fan fail, however most ATV operations can continue even with a cabin fan failed, albeit with some workarounds. 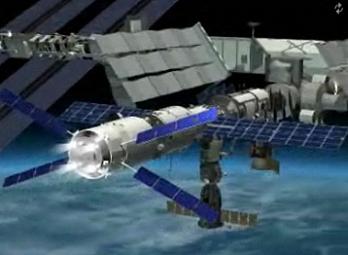 A number of failures were also seen due to ground commanding issues, such as an early reboost termination caused by Mission Control Center-Moscow (MCC-M) inadvertently selecting only one ATV thruster for the reboost instead of two, leading to the thruster being shut down due to a temperature violation.

Additionally, the first ATV-3 undocking attempt failed due to an incorrect spacecraft identification parameter being sent to the ATV Proximity Communication Equipment (PCE) by MCC-M. These issues will all be resolved for ATV-4 due to updated ground procedures and flight rules.

“All anomalies seen during the ATV-3 mission have been investigated, analysed and the corresponding agreed corrections or work-around, when required, have been put in place for ATV-4,” explained Mr. Novelli.

While ATV-4’s primary mission will be to resupply and service the ISS, its mission will also contribute to future Beyond Earth Orbit (BEO) space exploration by acquiring valuable engineering knowledge, expertise and experience for the teams building the Service Module (SM) for NASA’s Orion Multi Purpose Crew Vehicle (MPCV), the design and construction of which will be handled entirely by ESA and based heavily on the ATV SM. 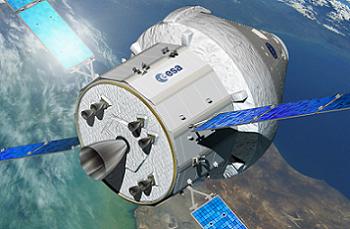 Throughout the ATV-4 mission, every operation, including propulsive maneuvers, reboosts, dockings, undockings, and regular attached phase operations such as provision of electrical power and life support, ATV-4 will be contributing valuable engineering data and proven capability to the MPCV design effort

According to Nico Dettman, head of ESA’s ATV Programme Department, in response to a question from NASASpaceflight.com: “The MPCV-ESM (European Service Module) is using a number of ATV components (thruster, gas tanks, etc.) and is building on ATV heritage in terms of know-how in designing and qualifying a service module. 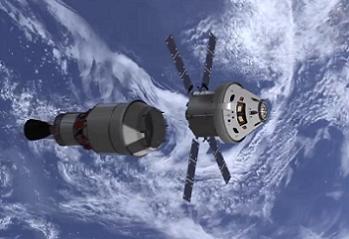 “Overall, the design of the ESM will differ in many aspects from the ATV-SM, taking into account four different design reference missions (lunar and LEO missions) including propulsive support to mission abort in certain contingency cases with a crewed capsule.

“The later will be achieved by integrating one of the former Shuttle OMS engines.”

Thomas Reiter, former ESA astronaut and current Director of ESA Human Spaceflight and Operations, told NASASpaceflight.com: “I am extremely proud of the dedication and problem-solving ingenuity of the ATV teams at ESA, CNES, Arianespace and Astrium, who collectively ensure the success of each ATV mission.

“We are looking forward to achieving all ATV-4 mission goals and, after ATV-5, to working even closer with our NASA colleagues as ATV heritage technology is integrated into the Orion Service Module.”