A sudden increase in a previously small ammonia leak in the coolant lines of a power channel on the outside of the International Space Station (ISS) has prompted ground teams to enter into a state of rapid investigations and replanning, in order to stop the ammonia from leaking away into space as soon as is possible. Previously unplanned spacewalks are imminent – the first to take place on Saturday – in order to rectify the leak.

On Thursday afternoon, ISS flight controllers saw data indicating a large increase in a previously known small ammonia leak in the cooling loop of power channel 2B on the P6 Truss of the station. At the same time, the crew inside the station noted that they were able to see flakes of ammonia originating from the channel 2B area, which were floating away into space.

According to the crew, the leak rate increased as the solar arrays reached a certain point in their rotation. 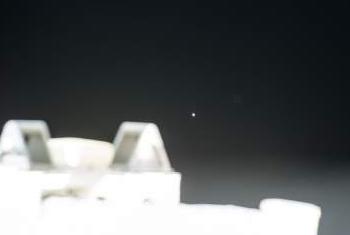 The crew quickly took photographs of the leaking ammonia and downlinked them to the ground for analysis (images now available in L2), whereupon they were asked to close the shutters of all windows not in use in order to prevent ammonia contamination.

The immediate response of the ground teams was to begin preparations to shut down the 2B power channel in order to stop the ammonia leak, and preserve what little coolant is left in the 2B cooling loop.

As such, on Friday morning, channel 2B’s loads were transferred onto channel 2A, following which channel 2B was shut down, taking with it 12.5 percent of the station’s power generation capability.

Power channel 2B is located on the Port 6 (P6) Truss of the station, and is fed power from Solar Array Wing (SAW)-2B, also located on the P6 Truss. This primary power (150-170 VDC) is then sent downstream to a Main Bus Switching Unit (MBSU) and then on to a DC to DC Conversion Unit (DDCU), where it is converted into secondary power (124 VDC) which is used to power user loads. 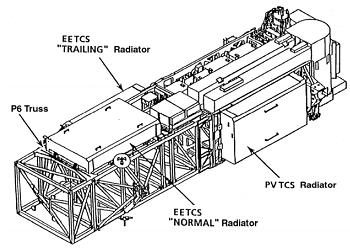 The purpose of this is to keep the cooling associated with solar power generation separate from the main ISS cooling loop, to both reduce the operating temperature of the main loop, and also avoid having to transfer cooling fluid over the rotating Solar Alpha Rotary Joint (SARJ).

The P6 PVTCS has its own dedicated radiator, called a Photo Voltaic Radiator (PVR), which uses ammonia to transport heat away from the electronic equipment and radiate it into space. The two power channels on the P6 Truss – 2B and 4B – both share the same PVR for cooling. 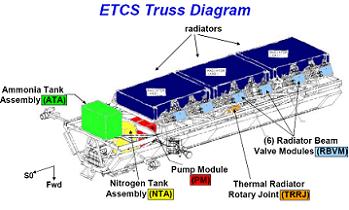 The PVTCS PVR is different to the ETCS radiators, which are called Heat Rejection Subsystem Radiators (HRSRs), in that the PVRs are smaller and have less cooling loops than the HRSRs, which are designed to dissipate a larger heat load than the PVRs.

Since 2006, ISS flight controllers have been tracking a slow ammonia leak in the channel 2B cooling loop in the P6 PVTCS, which, due to its very low leakage rate, was not considered a major concern, with the only action required being a periodic ammonia re-fill of the leaking loop, a task that was successfully accomplished during an EVA on the STS-134 Space Shuttle mission in May 2011.

At that time, based on the known leakage rate, it was projected that another re-fill would not be needed until 2015.

In June 2012 however, ISS flight controllers noted a sharp increase in the leakage rate, although in relative terms the leak was still very small. 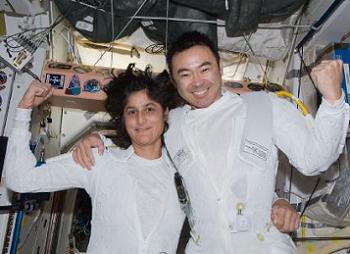 It was believed that the leak was in the 2B cooling lines on the P6 PVR, likely caused by a Micro Meteoroid Orbital Debris (MMOD) strike on the radiator, and as such a spacewalk (US EVA-20) was performed last November to deploy a spare PVR on the P6 Truss, and connect the 2B cooling loop to that spare PVR in order to stop the leak.

However, data now indicates that the leak in the 2B coolant loop still exists, meaning that EVA-20 was ineffective, and that the PVR was not the cause of the leak.

It was noted at the time of EVA-20 that the leak location was only a best guess, and that the leak could also be located in the 2B Pump Flow Control Subassembly (PFCS).

Due to the now rapidly increased ammonia leak rate on channel 2B, at least one, and likely two, US Extra Vehicular Activities (EVAs) are likely to be performed within the next week to isolate and repair the leak. No US EVAs were scheduled to be performed until July this year, meaning these accelerated EVAs will be classed as contingency EVAs. 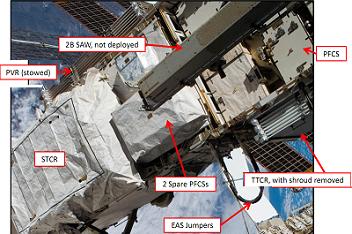 At this time, and as noted as a possibility last year, the leak is believed to be in the Pump Flow Control Subassembly (PFCS) on channel 2B on the P6 Truss.

The PFCS – one of which can be found on each of the eight power channels on the ISS – transport ammonia from the heat exchanger to the radiators, and regulate the flow, temperature, and pressure of the ammonia.

They are essentially the PVTCS equivalent of the Pump Module (PM) found on the main ETCS cooling loop – of which one (the Loop B PM) failed in 2010.

This required three EVAs by spacewalking superstars Doug Wheelock and Tracy Caldwell-Dyson to Remove & Replace (R&R) the failed PM, with the stiff Quick Disconnects (QDs) between the PM and ISS proving to be most tricky part of the plan.

The 2B PFCS is located on the P6 Truss Integrated Equipment Assembly (IEA), and is attached to the IEA via a coldplate assembly. 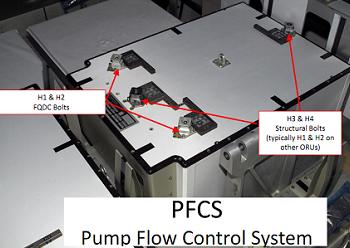 The PFCS is bolted to the coldplate via two acme screws, and power and data is provided via “doghouse” blind connectors that are automatically made once the two acme screws are driven.

This is the same exact method that is used to attach many components to the ISS, including the Main Bus Switching Unit (MBSU), the alignment and attachment of which proved to be extremely challenging on US EVAs 18 and 19 last year.

However, the PFCS differs from the MBSU in that the PFCS also has fluid QD connectors for the ammonia, which are aligned via the doghouse connectors, but have their own separate screws that need to be driven in order to fully mate and open the valves in the QDs.

The PFCS has a design life of 15 years (the 2B PFCS has been operating for around 12.5 years), and the replacement of a PFCS appears in the “big 13” list, which details the 13 most critical components of the ISS that would require an immediate EVA response should they fail. 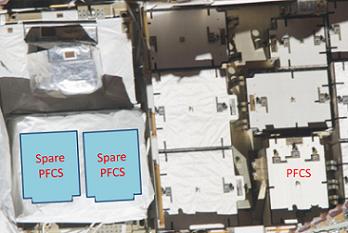 Another spare PFCS unit is located on External Stowage Platform-1 (ESP-1), and was launched on STS-102 in March 2001.

At this time, it appears that the first EVA (which will be US EVA-21) will be performed on Saturday (11 May), the aim of which will be to inspect the 2B PFCS for leaks with a view to confirming it as the likely culprit prior to replacing it. 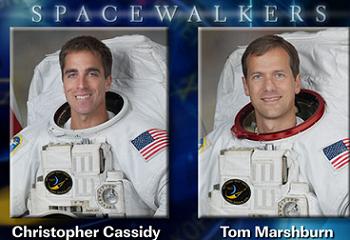 According to sources, the EV crew will be Chris Cassidy (EV-1) and Tom Marshburn (EV-2), who have both previously conducted EVAs together on the STS-127 Shuttle mission in July 2009.

If the 2B PFCS is confirmed as the source of the leak, it will need to be removed from the P6 Truss and replaced with a new unit.

The 2B coolant loop will then likely need to be re-filled with fresh ammonia via an Ammonia Tank Assembly (ATA) in order to replace the ammonia that has been lost. It is not yet known how many EVAs this would take to accomplish.

The situation is complicated by the fact that Marshburn was scheduled to return to Earth aboard Soyuz TMA-07M on Monday (13 May), however that landing may now be delayed due to the need for Marshburn to perform the EVAs. It is not yet known whether a delay in the Soyuz TMA-07M landing would delay the launch of Soyuz TMA-09M, currently scheduled for 28 May.