Virgin Galactic are ramping up their operations, with one powered test flight – or propulsive test – already under their belts. 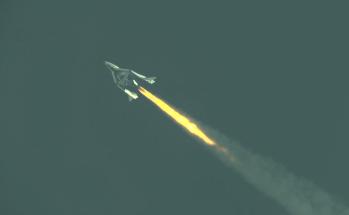 Several additional powered flights are set to take place – expanding the spaceships powered flight envelope – ahead of the “realistic goal” of suborbital test flight by the end of the year.

As such, Virgin Galactic believe the addition of new pilots will enable the company to meet the test schedule demands and prepare for subsequent commercial operations.

They will join up with Mark Stucky and Mike Alsbury – test pilots for SS2′s designers, Scaled Composites – who piloted the recent powered flight over the Mojave desert. 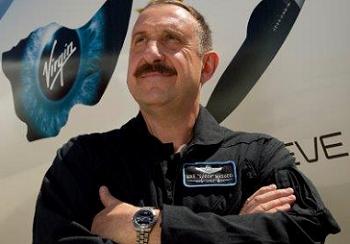 Masucci joins Virgin Galactic from XOJET Inc, a private airline company where he was a Citation X (CE750) Captain and Check Airman, and has more than 30 years of civilian and military operational and test flying experience with more than 9,000 flight hours in over 70 different airplane and glider types.

The former U-2 combat pilot also instructed in the F-16, T-38 and glider aircraft at the USAF Test Pilot School, while also serving as a Branch Chief. As a U-2 test pilot he was instrumental in the development and testing of the aircraft’s glass cockpit and power upgrade programs. In addition, Masucci has commanded USAF developmental and operational test units, as well as combat and training units.

“Virgin Galactic is truly a world-class organization with unique flight opportunities that you just wont find anywhere else,” Masucci said. “Im proud to be a part of this team and look forward to contributing to this revolutionary program.” 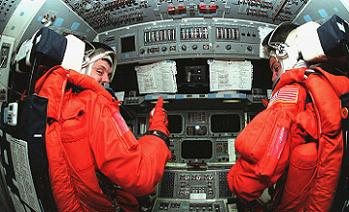 However, he is best known for logging 1,200 hours in space via four Shuttle missions. He becomes Virgin Galactic’s first astronaut in their pilot corps.

After joining NASA in 1994, Sturckow flew his first mission with Endeavour as her pilot during STS-88 – the first International Space Station assembly mission. During the 12-day mission in 1998, the Unity model was mated with Zarya, the Russian built Functional Cargo Block (FGB).

His second Shuttle mission was also as pilot, this time with Discovery in 2001. STS-105 was the 11th mission to the ISS, which delivered the Expedition 3 crew, attached the Leonardo Multi-Purpose Logistics Module and transferred more than 2.7 metric tons of supplies and equipment to the station. 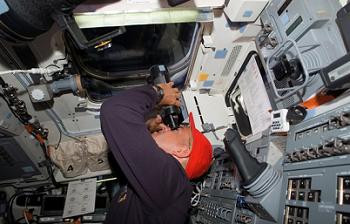 He then got to fly with Atlantis – this time as her commander – during her STS-117 mission in 2007. The 118th shuttle mission and the 21st mission to visit the ISS saw the S3/4 truss segment – the heaviest element ever delivered by the shuttle to the station – ride uphill, as the orbital outpost took shape.

Sturckow made his final flight with Discovery, commanding the STS-128 mission in 2009. The 128th shuttle mission and the 30th mission to the ISS, delivered 18,500 pounds of hardware to the Station.

He then went on to serve as deputy chief of NASAs Astronaut Office for the final shuttle missions, flying weather reconnaissance in the T-38 and Shuttle Training Aircraft for launch and landing, before retiring from NASA. 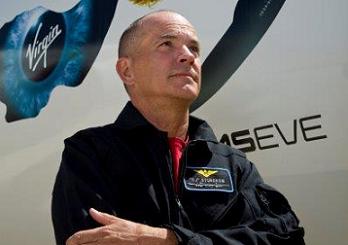 “Viewing the Earth from space is such a unique and unforgettable experience,” Sturckow added. “I’m excited to be a part of the Virgin Galactic team that is revolutionizing access to space, making this opportunity a possibility for all.”

Masucci and Sturckow will report to Chief Pilot David Mackay and Vice President of Operations Mike Moses at Virgin Galactics Mojave location, where they will conduct flight training and testing with Virgin Galactic’s WhiteKnightTwo and SpaceShipTwo vehicles.

“I am pleased to have these two incredibly accomplished pilots join us during this important time as we embark on a series of important rocket-powered flight tests for SpaceShipTwo, ultimately testing the vehicle in space,” said Virgin Galactic President and CEO George Whitesides.

“Their collective experience and outstanding performance in various demanding environments will make them invaluable assets to the Virgin Galactic team.”

(Images via NASA and Virgin Galactic).