Europe’s Automated Transfer Vehicle-4 (ATV-4) “Albert Einstein” spacecraft successfully docked to the International Space Station (ISS) on Saturday at 2:07 PM GMT, following a ten-day period of free-flight. ATV-4’s docking follows the undocking of Progress M-19M, which was under suspicion of potentially damaging the ISS due to a faulty antenna.

ATV-4 docked to the ISS at the Russian Segment (RS), via the Service Module (SM) “Zvezda” Aft docking port, that until a few days ago was occupied by the Progress M-19M vehicle.

That Progress vehicle docked to the ISS back in April with an undeployed Kurs antenna, which ground teams thought could have potentially impacted a Laser Retro Reflector (LRR) navigational aid on the Aft of the SM that is used by the ATV during docking. 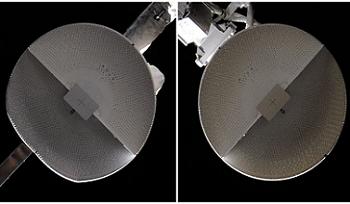 It was not until Progress M-19M undocked from SM Aft on 11 June that the first camera views of the LRR were available to evaluate any potential damage.

However, after two months in space, the undeployed Kurs antenna on Progress M-19M actually deployed upon undocking, which, assuming the deployment occurred right at the moment of undocking, could have occurred with as little as 2mm of clearance between it and the ISS.

Undocking photos of Progress M-19M (L2) clearly show a visibly deformed Kurs antenna, where it had been crushed against the ISS during docking.

The camera views of the SM Aft area did not appear to show any visible signs of damage however, and so at this time it is assumed that the LRR is undamaged, and thus ATV-4 is cleared to proceed with rendezvous and docking.

Following ten days of free-flight activities after ATV-4’s launch atop an Ariane V booster from the Kourou spaceport in French Guiana, ATV-4 will today rendezvous and dock with the ISS using the same proven fully automated procedures as were used during the previous three ATV missions. 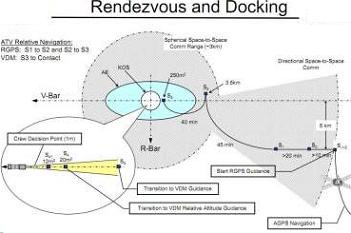 The homing phase consisted of two 2m/s homing burns, and two 0.5m/s correction burns. It was noted that one of the ATV-4 thrusters has failed, but controllers were happy to give go for docking.

After arriving at the S4 waypoint, ATV-4 aligned itself with the SM Aft port, whereupon FA2 began, which took ATV-4 from S4 at 20m to S41 at 12m from ISS.

The approach then continued, being constantly monitored (but not controlled) by the crew inside the ISS, until the Crew Hands Off Point (CHOP) was reached when ATV-4 was one meter from the ISS, which was the point at which ATV-4’s own momentum made any propulsive abort ineffective.

Shortly following CHOP, contact and capture was made via ATV-4’s Russian probe docking probe, with probe retraction following shortly thereafter, leading to hard dock of ATV-4 to the ISS.

Following docking, ATV-4 was set to be ingressed on Monday (17 June), when hatch was due to occur. However, this was delayed a day due to the potential of mold lingering on a few of the cargo bays.

The hatch will need to be closed again less than a week later, as ATV-4 will need to be prepared for undocking in the event that the Service Module should become inaccessible due to an airlock repressurisation failure during Russian EVA-33 on 24 June.

ATV-4 is carrying an extensive amount of cargo – the largest amount of internal cargo ever flown on an ATV – which amounts overall to a staggering 201 Cargo Transfer Bag Equivalent (CTBE), held in eight cargo racks inside ATV-4, seven of which are carrying “rack front cargo” via large cargo bags mounted to rack adapter plates on the front of the racks.

The process to unload all of this cargo, load 145 CTBE of trash in its place, while at the same time keeping track of every move and maintaining an acceptable centre of mass in the vehicle, is outlined in an extensive cargo choreography presentation on L2. All in all, cargo loading and trash loading is expected to take around 75 hours of crew time. 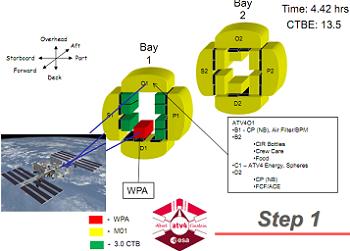 However, as detailed in L2 documents, ATV-4’s cargo unloading will be combined with a special Development Test Objective (DTO) aimed at decreasing crew time needed for cargo ops, to increase time available for scientific activities.

The new DTO will test the effectiveness of having one astronaut (in this case ESA astronaut Luca Parmitano) serve as “loadmaster”, responsible for tracking all cargo moves done by all crewmembers and then relaying that to the ground, which will allow multiple crewmembers to work simultaneously and in parallel to unload cargo, which it is believed is more effective than having different crewmembers all tracking different moves at different times.

In addition to cargo unloading however, ATV-4 will also serve as a “propulsion module” while attached to the ISS, aiding in attitude maneuvers, reboosts, and Debris Avoidance Maneuvers (DAMs). The first reboost, which will be a test of ATV-4’s Orbit Correction System (OCS) engines while attached to the ISS, is planned for 19 June. The second reboost is currently planned for 10 July.

Following approximately four months of Attached Phase Operations (APO), ATV-4 is currently planned to undock from the ISS on 28 October. A destructive re-entry over the South Pacific Ocean will then follow, which will conclude the penultimate mission for Europe’s heavy hauler cargo spacecraft.

(NSF and L2 are providing full coverage of all current and future vehicles, to LEO, ISS, and BEO).