As development of the Space Launch System (SLS) rocket continues, NASA is looking to its international partners for inspiration and lessons learned. Specifically, the agency sent a team to Kourou, French Guiana, to observe and report on the processes and ground operations employed by the European Space Agency for the Ariane V, with an eye toward using those processes to potentially streamline SLS ground processing operations at KSC.

Observations of the site visit team to the Guiana Space Center:

Overall, operation of the Guiana Space Center (CGS) is a rather lean process. With just over 1,660 employees, the relatively small staff is required to accomplish all of the activities of the launch sites operations.

Of particular note by the Ground Systems Development and Operations (GSDO) site visit team was the fact that all of these technicians are trained to process and launch any of the three vehicle types present at the space center. 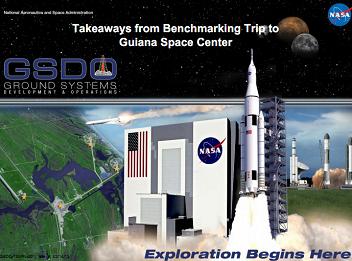 These processes include, maintaining all facilities and equipment, casting solid propellant into the SRBs for the Vega first stage and the Ariane V SRBs (except forward star configuration segment), and manufacturing liquid propellant, notes the Takeaways from Benchmarking Trip to Guiana Space Center presentation  available for download on L2.

Soyuz operations at the CSG are augmented with 300+ personnel who travel from Russia  during launch campaigns only. The aforementioned 1,660 employees carry out all other Soyuz-related work. 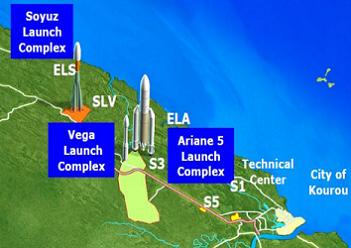 The site visit team noted the complex – yet seemingly mature and effective – organizational structure employed at CGS, with most aspects of vehicle manufacturing and assembly being geographically distributed to ESA member states.

When viewed from the Ariane V flow standpoint, the GSDO team found numerous potential learning points for NASA as the agency moves toward realization of the SLS rocket.

In particular, the team outlined the process for integrating and launching the Ariane V rocket.

Stacked in a separate Booster Integration Facility, a climate controlled building, the Ariane Vs SRB segments are mated together with the use of movable platforms with emergency exit points at expected levels were booster access is required, notes the GSDO presentation.

All booster access is carefully planned to occur in the Booster Integration Facility, with no planned access after the Boosters leave for integration with the Core Stage.

The site team also noted the lack of a water deluge system in the Booster Integration Facility. Discussions with Guiana Space Center officials revealed that the installation of sprinkler systems is based on risk and not strictly on code compliance. 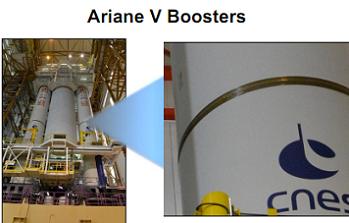 The GSDO report also discussed the incorporation of five accelerometers on each Ariane V SRB for in-flight measurement of thrust oscillation.

However, the largest discussion contained within the report related to the heaters and field joint insulation of the Ariane Vs SRBs versus those on the Space Shuttle-derived SRBs for the SLS rocket.

The GSDO site team presentation notes, “Ariane V SRBs do not have any heaters or installation on their field joints. After segment mate, they install the pins, pin retainer band, and then coat the joints with grease to inhibit corrosion. 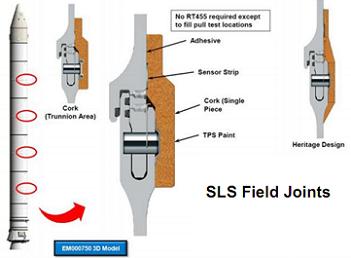 “We provide various levels of insulation on our SRB field joints.”

As noted by the GSDO presentation, “design significantly simplified over heritage design with the elimination of joint heaters.”

Additionally, it appears that the RT 455 material will not be required except to fill pull test locations on the new field joints. Furthermore, the cork area around the SLS SRB case segments has been significantly reduced from the design used on Shuttle.

Returning back to the site visit at Kourou, the team noted one final aspect of the SRB environment: that it contained no FOD elimination requirements “during the tour, even as we leaned within inches of the solid motors.”

For Ariane V consideration, after the SRB segments are stacked and integrated, they are transported by rail to the Launcher Integration Building.

Here, the Ariane V Core Stage/Upper Stage is mated with the twin SRBs. 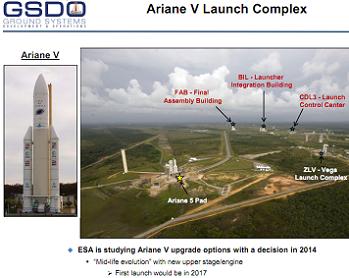 By the time the Core and Upper Stages arrive in the Launcher Integration Building for mating with the solid rockets, the Upper Stage and the launchers vehicle equipment bay have already been pre-integrated on the European continent prior to shipment for South America.

This is done primarily to accelerate the mission launch rate and reduce the amount of time necessary to process both stages at the launch site.

In regards to the core and Upper Stage portions of the vehicle, the site visit team also noted the Linear Shaped Charges (LSCs) that are used in the event of launch mishap. 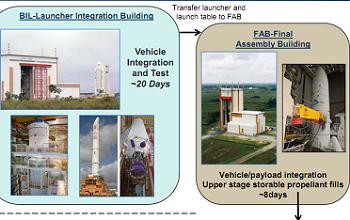 Once the Core and Upper Stages have been mated to the twin solid rockets, the mechanical inhibitors are removed prior to the vehicles roll to the pad.

Electrical inhibits remain in place on the Linear Shaped Charges to prevent accidental detonation during the vehicles move to the pad for final countdown and launch operations.

These electrical inhibits are removed while the vehicle is at the pad in a process that does not require physical access to the vehicle,  something NASA is hoping to mitigate with SLS pad operations.

The presentation further noted that both the Ariane V and Vega launch vehicles are “neutralized with LSCs if they go off course.” LSCs are not used on the Russian Soyuz vehicles, however. Instead, the Soyuz is commanded to shut down its engines and is then allowed to fall into a predicted impact location with minimal debris field.

Once the SRBs and Core/Upper Stages are mated together, a vehicle integration test sequence begins. The entire mating and testing operation takes approximately 20 days to accomplish.

Afterward, the main propulsive portions of the vehicle are moved to the Final Assembly Building where the processes of integrating the vehicle with its payload and fueling the Upper Stage storable propellants takes approximately eight days. 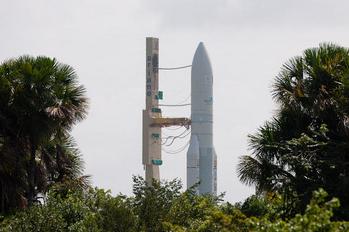 The vehicle then makes the 3 km trip to the launch pad where a “no access at pad” approach is employed for the duration of the approximate 12-hour-on-launch-pad operation sequence.

At the pad, two half wave T-0 dampener cables are used to keep the rocket from tipping in one direction. The wind always blows in the same direction at the Kourou Guiana Space Center, according to the GSDO document.

Cryogenic propellant arms attached to the third stage also provide stabilization for the vehicle up to 12 seconds prior to lift off when the arms are disengaged prior to Core Stage ignition.

This kind of knowledge could prove beneficial to NASA in their development of the SLS which, because if its sheer height and in-line design, will require stabilization arms from the launch umbilical tower to keep it from falling over in the windy sea-side environment of the Kennedy launch complex. 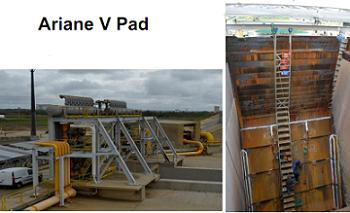 Also of note for the Ariane V launch pad were the flame deflector, the sound suppression system, and the handrails at the pad.

Specifically, the team noted that the flame deflector did not have an ablative material, which could result in large potential savings for GSDO if the same approach was used for SLS.

Moreover, the Ariane V sound suppression system was found to be of a much higher caliber than the one employed at the LC-39 launch complex of Kennedy.

As noted by the team, “Water is down stream from the tank well before lift off. Water doesn’t have to travel long distances following release. Two valves in series very close to the nozzles enable water to be released exactly when water is required.

Finally, the site team noted that the handrails on the Ariane V launch table are permanently mounted. If the same practice could be adopted for SLS, significant time-savings could be realized by not having to remove the handrails prior to launch.

In all, the GSDO teams site visit to the Kourou, French Guiana launch site for the European Space Agency led to the creation of distinct action items. 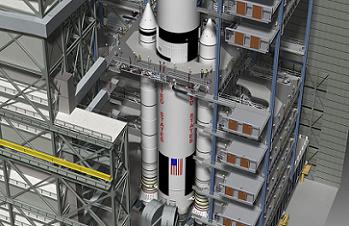 These action items include: Confirm the requirement for clean rooms during SRB joint mate in the VAB; Review SRB segment re-inspection time requirements; Travel of SLS Booster Element manager to KSC to review GSDOs step-by-step design viz ops to ensure there are no un-necessary processing requirements; and Explore GSDO use of SLSs 5-segment inert booster for pathfinder type stacking.

(Images: Via L2 content from L2’s SLS specific L2 section, which includes, presentations, videos, graphics and internal – interactive with actual SLS engineers – updates on the SLS and HLV, available on no other site. Other images via Arianespace/ESA)