A Russian Soyuz 2-1B launch vehicle has lofted the second Persona reconnaissance satellite into space on Friday. The launch was conducted at 18:37 GMT from launch pad 43/4 at the Plesetsk Cosmodrome in northern Russia, with a successful spacecraft separation confirmed by the Russian military.

The Soyuz-2 was developed from the older Soyuz models, and features digital flight control systems and modernized engines. It first flew in 2004, and this is its twelfth launch.

Two variants are currently in service; the Soyuz-2-1A, and the Soyuz-2-1B. The latter variant was used for the Personal launch, with the vehicle featuring an RD-0124 third stage engine, which provided additional thrust. The RD-0124 was declared operational on 3 May 2011.

A third configuration, the Soyuz-2-1v, is currently under development and is expected to make its maiden flight in the coming months. That variant features an NK-33 engine in place of the RD-108A used on the core stages of the other configurations, and does not include the strap-on boosters used by other configurations.

The Soyuz-2 also forms the basis for the Soyuz-ST rocket, which made its maiden flight from Kourou in French Guiana. The Soyuz-ST is optimized to fly from Kourou, and also incorporates a flight termination system and a modified telemetry system.

The core stage of the Soyuz-2, the Blok-A, is powered by a single RD-108A engine. This is augmented for the first two minutes of flight by four boosters, each of which is powered by an RD-107A engine. An optional Fregat Upper Stage – powered by an S5.98M engine – uses unsymmetrical dimethylhydrazine as propellant and nitrogen tetroxide as an oxidizer.

The Fregat first flew in 2000, and has been used on Soyuz-U, Soyuz-FG, Soyuz-2 and Zenit rockets. It was not, however, used on the Soyuz 2-1A launch with Persona. 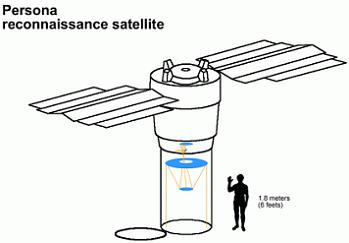 The satellites optical subsystems include a triple mirror telescope with a primary mirror diameter of 1.5 metres (4.9 ft) and focal length of 20 metres (66 ft). The satellite is understood to have a mass of 6,500 kilograms (14,000 lb). It is expected to operation for seven years.

The first satellite, identified as Kosmos 2441, was launched into a 750 km sun synchronous orbit on 26 July 2008, atop a Soyuz 2-1B rocket from LC-43/4 at the Plesetsk Cosmodrome. However, it failed to return useful imagery due to an electrical malfunction.

This second satellite – built by TsSKB-Progress, with optics by LOMO and the Vavilov State Optical Institute – was reported to have separated successfully after launch according to the Russian Defense Ministry.