The IRNSS-1A satellite is the first of seven which will make up the Indian Regional Navigation Satellite System (IRNSS). The constellation will consist of four satellites in geosynchronous orbits inclined at 29 degrees, with three more in geostationary orbit. IRNSS-1A is one of the geosynchronous satellites, and is expected to be positioned at a longitude of 55 degrees east. 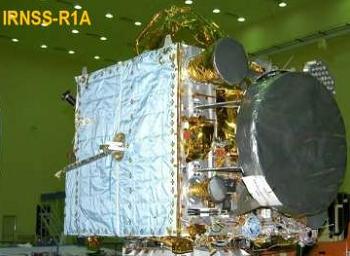 It is powered by two solar arrays, which generate up to 1,660 watts of power. The spacecraft is expected to operate for ten years.

Monday’s launch, which marked the twenty-fourth flight of the Polar Satellite Launch Vehicle, was designated as flight number C22.

The rocket flew in the PSLV-XL configuration, which was first used in 2008 to launch the Chandrayaan 1 spacecraft to the Moon. To date, the PSLV-XL has made three flights – also deploying the GSAT-12 communications satellite, and the RISAT-1 radar imaging satellite.

The first of its two past failures occurred on the maiden flight, which lost attitude control at second stage separation and as a result failed to achieve orbit. The other failure was the first operational launch, in September 1997, when a fourth stage helium leak led to the rocket placing the IRS-1D satellite into a lower-than-planned orbit which significantly reduced the spacecraft’s operational lifespan. 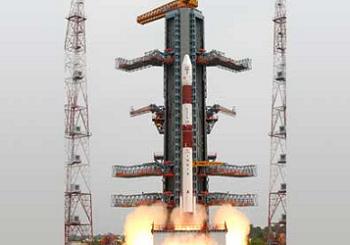 The PSLV-XL is a four-stage carrier rocket augmented at liftoff by six boosters. The second and fourth stages are liquid-fuelled, while the first and third stages and boosters use hydroxyl-terminated polybutadiene-based solid propellant.

The first stage is a PS1, which utilities an S-138 solid rocket motor. During the early stages of flight, six PS0M-XL strap-on solids, powered by S-12 motors, will augment the first stage’s thrust. The use of PS0M-XL solids, in place of the smaller S-9 powered PS0M solids used on the regular PSLV, is the main difference between the PSLV-XL and the standard PSLV.

The second stage of the PSLV, the PS2, is powered by an L40 Vikas engine, derived from the Viking engine developed for the European Ariane rocket. It is fuelled by UH25 propellant – a mixture of unsymmetrical dimethylhydrazine and hydrazine hydrate, and uses dinitrogen tetroxide as oxidizer. The third stage, or PS3, has an S-7 solid motor.

The final stage is the PS4, which burns monomethylhydrazine oxidised by MON-3 – a mixture of nitric oxide, dinitrogen tetroxide and nitrogen dioxide. The PS4 is powered by two L-2-5 engines.

Monday’s launch took 20 minutes and 25.4 seconds from liftoff to the deployment of IRNSS-1A into its initial transfer orbit. The target orbit for the PSLV C22 mission was a geosynchronous transfer orbit with an apogee of 20,650 kilometers (12,831 miles), a perigee of 284 kilometers (176 miles), and an inclination of 17.86 degrees. Documentation gives a margin of error of 675 kilometers (419 miles) in apogee, 5 kilometers (3 miles) in perigee, and 0.2 degrees in inclination. 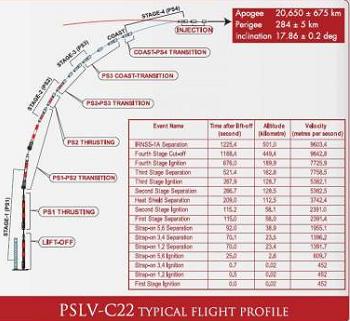 The first stage burned for 115 seconds, after which it separated from the second stage. Two tenths of a second after staging, the second stage ignited to begin its own 151.7-second burn. The payload fairing, termed a “heat shield” by ISRO, separated 93.8 seconds into second stage flight.

The fourth stage then continued to coast for 156.4 more seconds before igniting. This eight minute, 32.4 second burn concluded powered flight for the C22 mission. Thirty seven seconds after burnout, IRNSS-1A separated from the PSLV.

Following its separation from the carrier rocket, IRNSS-1A will maneuver into geosynchronous orbit. To accomplish this, it is equipped with an apogee motor generating 440 newtons (100 lb) of thrust, and twelve smaller maneuvering thrusters which each produce 22 newtons (5 lb). Burns will be made at perigee during the fifth and eighth orbits to raise the satellite’s apogee to geosynchronous altitude.

Following this, apogee burns on the ninth, eleventh and twelfth orbits will circularize the orbit and increase inclination from 17.86 degrees to 29 degrees. 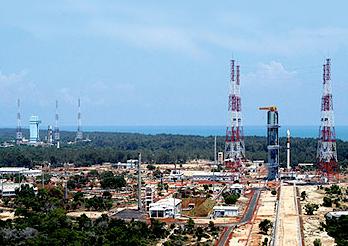 The PSLV will fly from the First Launch Pad at the Satish Dhawan Space Centre. The older of the two launch complexes in use for PSLV and GSLV launches, the pad can accommodate either of the two rockets; however GSLV launches are usually made from the Second Launch Pad. Unlike the Second Launch Pad, where rockets are stacked in an assembly building and then rolled to the launch pad, rockets flying from the First Launch Pad are assembled on the launch pad.

PSLV C22 is India’s second orbital launch this year, following February’s successful deployment of the SARAL satellite and several secondary payloads. India’s next scheduled launch is expected to occur in the first week of August, when the GSLV Mk.II will fly its second demonstration mission. This will be the first GSLV launch since two back-to-back failures in 2010.

The next PSLV launch is scheduled for October with the Mangalyaan spacecraft bound for Mars. The second IRNSS satellite is expected to be launched next March.

Russian Proton-M fails at launch and crashes into spaceport