The US Navy’s MUOS-2 satellite was launched on Friday morning aboard a United Launch Alliance Atlas V. Liftoff from Space Launch Complex 41 at Cape Canaveral was re-scheduled to 13:00 UTC (09:00 local time) after an earlier upper level winds constraints. The spacecraft was delivered to its initial destination via the Centaur Upper Stage.

MUOS-2 is the second in a series of five planned Mobile User Objective System (MUOS) satellites, part of a six billion dollar program to replace the UHF Follow-On (UFO) satellites currently used by the US Navy.

The prime contractor for the MUOS program is Lockheed Martin, with the spacecraft based around the A2100M satellite bus. At a gross mass of around 6,740 kilograms (14,900 lb), MUOS are among the heaviest unclassified spacecraft ever placed into geosynchronous orbit. A BT-4 liquid rocket motor, produced by IHI Corporation of Japan, will be used to perform on-orbit maneuvers. 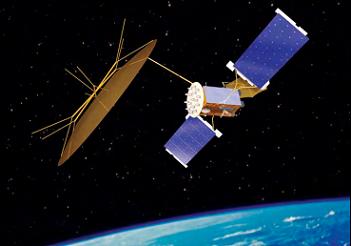 The satellite’s 14-metre (46-foot) reflector antennae are produced in Melbourne, Florida by Harris Corporation, while part of the communications payload is constructed by Boeing IDS. General Dynamics and Ericsson are responsible for developing the ground segment of the MUOS system.

The first MUOS satellite, MUOS-1, was launched in February 2012, also by an Atlas V. That spacecraft completed initial on-orbit testing on 17 July last year, ahead of acceptance testing by the US military.

A Navy program, MUOS is one of several series of communications satellites operated by the US military. The US Air Force operates the Wideband Global Satcom and Advanced Extremely High Frequency program, both of which are expected to see launches in the next two months.

The National Reconnaissance Office also has its own communications satellites, the Satellite Data System (SDS), and several other spacecraft, such as the mysterious PAN satellite, have been launched. The US military was also reported to have bought the AMC-14 satellite from SES after it failed to achieve geostationary orbit in 2008. 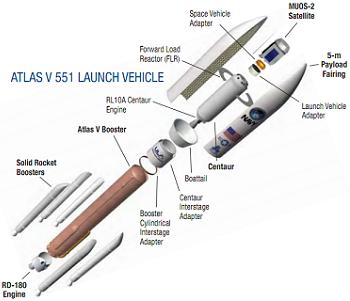 The rocket that launched MUOS-2 was an Atlas

V 551, tail number AV-040. Friday’s launch marked the fourth flight of the 551 configuration, which is the most powerful version of the Atlas V, and the thirty-ninth Atlas V launch overall.

First flown in 2002, the Atlas V is, along with the Delta IV, one of two Evolved Expendable Launch Vehicles (EELVs) developed to meet the requirements of the US military. Both the Atlas V and Delta IV are operated by United Launch Alliance, which was formed in December 2006 to take over operations of the EELV fleet and Boeing’s older Delta II rocket.

In its thirty-eight flights to date, the Atlas V has achieved a near-perfect success record, with only one partial failure – a fuel leak caused by a valve failure led to AV-009 placing the USA-194 spacecraft into a lower-than-planned orbit in 2007.

Atlas is one of the most reliable rockets flying – its last outright failure occurred over 20 years ago, when in March 1993 the UFO-1 satellite was placed into an unusable orbit after an engine failure. That launch used an Atlas I.

The Atlas V 551 was first used for the 2006 launch of the New Horizons spacecraft bound for Pluto, with subsequent launches deploying the Juno probe to Jupiter and the MUOS-1 satellite.

The first stage of the Atlas V is a Common Core Booster, powered by a single RD-180 engine burning RP-1 and liquid oxygen. Derived from the RD-170 engine developed for the Soviet Union’s Energia and Zenit rockets, the RD-180 first flew in 2000 on the maiden flight of the Atlas III, and Friday’s launch marked its 45th flight. 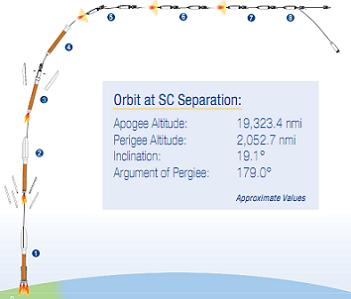 Ignition of the RD-180 came  2.7 seconds ahead of the scheduled launch time, allowing the engine to reach launch-ready thrust by T-0, at which point five Aerojet solid rocket motors attached to the first stage also ignited.

Liftoff occurred at T+1.1 seconds, with the rocket pitching over and performing a roll and yaw maneuver to attain its launch azimuth around 2.8 seconds later at an altitude of 26 metres (85 feet).

Forty-four seconds after liftoff, the rocket passed through the area of maximum dynamic pressure, or Max-Q. Burnout and separation of the solid rocket motors, which augment the RD-180’s thrust during the early phases of the flight, occurred around a minute later; the first two boosters separating 103.3 seconds after launch, and the remaining three followed a second and a half later.

Separation of the payload fairing came at T+191.5 seconds, with the Forward Load Reactor separating five seconds later, however the exact times were dependent on atmospheric conditions and heating.

Six different payload fairings are offered for the Atlas V; three four-meter variants and three five-meter fairings. For Friday’s launch a medium length five-metre fairing was used. This was 23.4 meters (76.8 feet) long with a diameter of 5.4 meters (17.7 feet). 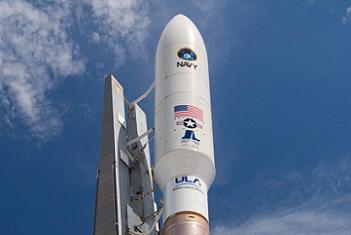 The five-meter fairings encapsulate the upper stage along with the payload, with a Forward Load Reactor, attached near the top of the upper stage, used to dampen vibrations in the fairing to provide a better acoustic environment for the payload.

The upper stage of the Atlas V is a Centaur, a descendent of a stage first flown in 1962 which made its 200th flight on the last MUOS launch in 2012. For the Atlas V both single and dual-engine Centaurs are available, however only the single-engine configuration has been flown to date.

The engine used on the Atlas V Centaur is an RL10A-4-2, which is fuelled by cryogenic propellant; liquid hydrogen and liquid oxygen. Centaur is expected to make three burns during Friday’s launch.

Following depletion of its propellant, the Common Core Booster’s engine cut off around four minutes and 21 seconds after launch. Six seconds later, the Centaur separated and begin its prestart procedure. RL10 ignition occurred 9.9 seconds after staging.

The Centaur’s first burn lasted seven minutes and 46.9 seconds, before the flight entered a seven-minute and 59-second coast phase. Following the coast, the second burn lasted five minutes and 55.7 seconds.

After the second burn, the launch entered an extended coast phase, lasting 142 minutes and 36.1 seconds. The final burn, which followed this, lasted just 59.1 seconds. Three minutes and 39 seconds later, MUOS-2 was successfully separated from its carrier rocket. 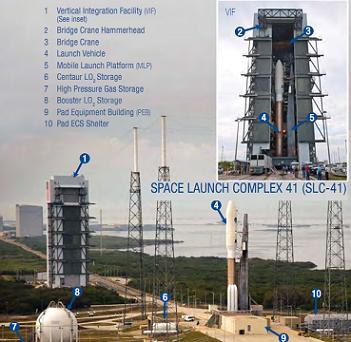 AV-040 was the sixtieth rocket to launch from Space Launch Complex 41 (SLC-41) of the Cape Canaveral Air Force Station.

Built during the 1960s for the Titan IIIC as part of the Titan Integrate-Transfer-Launch Complex, LC-41 as it was then designated saw its first launch in December 1965 when a Titan launched the LES-3 and 4 satellites, along with Oscar-4 and OV2-3.

A Vertical Integration Building (VIB), shared with LC-40, was used to stack the rockets before they were rolled out to the launch pad for payload installation in a cleanroom atop the pad’s Mobile Service Tower (MST). The MST was demolished in 1999, while the VIB was demolished in 2006 following the end of Titan launches from SLC-40.

In total, twenty-seven Titan launches took place from SLC-41; ten Titan IIICs, seven Titan IIIEs, and ten Titan IVs – all Titan IVAs except for the final Titan to launch from the pad; a Titan IV(402)B which failed to place a DSP satellite into geosynchronous orbit. The last Titan IVA launch from the pad also failed due to a guidance problem. These two launches were part of a run of three consecutive launch failures which the Titan IV suffered during 1998-99.

The Atlas V has made 33 of its 39 launches from SLC-41, beginning with its maiden flight in 2002. A new Vertical Integration Facility, located closer to the pad than the old building, is used to assemble the rockets, including their payloads, with rollout to the pad occurring a few days before launch.

Friday’s launch was the ninth US orbital launch attempt of 2013, and the thirty-eighth or thirty-ninth overall for the world, depending on a rumored Iranian launch failure believed to have occurred around 17 February. 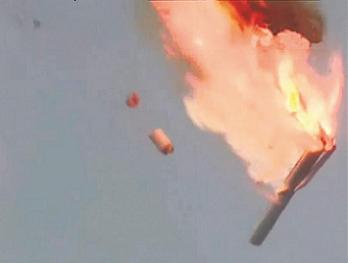 Two launches are confirmed to have failed; a Zenit-3SL failed to orbit Intelsat 27 on 1 February, and earlier this month a Proton-M went out of control immediately after launch with three GLONASS satellites, coming down close to its launch pad.

AV-040 is the fifth Atlas V launch of the year and the sixth launch of the year for ULA. The next Atlas launch is slated for 25 September, carrying the third AEHF satellite. Two further Atlas launches are planned for 2013; one with NASA’s MAVEN probe bound for Mars in November, and one in December with either an NRO payload or a DMSP weather satellite.

(Images via ULA and Tsenki TV)