British-born astronaut Michael Foale has retired from NASA following an amazing career that saw him fly on six Space Shuttle missions, a Soyuz and two Space Stations. Moving to a career in the commercial section, Foale’s space flight legacy includes 374 days in space, a record for an American citizen.

Born in Lincolnshire, England to a British father and an American mother in 1957, Foale moved to Cambridge, prior to receiving a first-class honors degree in natural sciences in 1978 and a doctorate in laboratory astrophysics from Queens’ College.

An Air Cadet with the Air Training Corps, Foale already had his pilot’s license by the time he took an opportunity to work in the Space Shuttle Program (SSP). Moving to Houston to work with the orbiter’s navigation system at McDonnell Douglas, Foale joined JSC’s Mission Operations Directorate (MOD) in 1983.

Working as a payload officer on four Shuttle missions (STS-51G, 51-I, 61-B and 61-C), Foale saw his application to become an astronaut twice turned down, despite by-passing the US citizen requirement via his dual-nationality.

However, he was finally selected into the Astronaut Corp in 1987, a year after the loss of Shuttle Challenger during STS-51L.

Foale’s first flight into space was as Mission Specialist -3 (MS-3) with Atlantis on her STS-45 mission, launched on March 24, 1992. It was Atlantis’ 11th mission, the 46th overall Space Shuttle mission.

During STS-45, Atlantis carried the first Atmospheric Laboratory for Applications and Science (ATLAS-1) on Spacelab pallets mounted in her Payload Bay. The non-deployable payload was equipment with experiments from the U.S., France, Germany, Belgium, Switzerland, The Netherlands, and Japan. 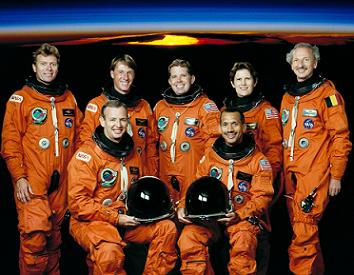 After nearly nine days in space, Atlantis landed safely at the Kennedy Space Center on Runway 33 on April 2, 1992.

STS-45 was commanded by the current NASA administrator Charlie Bolden, who paid tribute to the departing Foale.

“We salute Mike and his contributions to NASA as an accomplished member of the astronaut corps,” noted General Bolden. “Starting with his first flight, shuttle mission STS-45, when we flew together in 1992, Mike has worked tirelessly to support NASA’s quest to explore the unknown.” 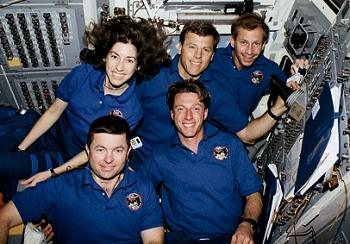 Following his debut space mission, Foale would only have to wait another year before his next ride, this time as Mission Specialist -1 (MS-1) on Shuttle Discovery during STS-56.

Launch in April 1993, Foale and the crew conducted numerous experiments with ATLAS-2 (Atmospheric Laboratory for Applications and Science-2) to collect data on the relationship between the Sun’s energy output and Earth’s middle atmosphere and how these factors affect the ozone layer.

The crew also deployed the SPARTAN-201 satellite, a free-flying science instrument platform designed to study velocity and acceleration of the solar wind and observe the sun’s corona.

SPARTAN-201 free flew for two days before being retrieved by Discovery’s crew.

Foale then took part in a major international mission, once again involving a ride on Discovery, but this time to the Russian Space Station Mir. 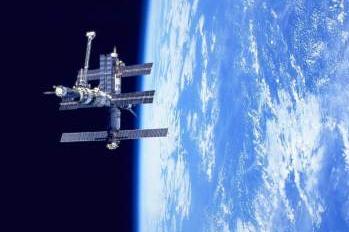 With Foale riding as Mission Specialist -2 (MS-2), Discovery’s 20th mission – STS-63 – saw the first Shuttle mission to rendezvous with the Mir space station. The mission – in February, 1995 – also marked another historical milestone: the first U.S. manned space mission to be piloted by a female; in this case, Eileen Collins.

While the eight day mission did not actually dock to MIR, it was the final test-bed mission before Shuttle-Mir dockings began in the summer of 1995 with Shuttle Atlantis.

However, Foale had to wait until the sixth mission in the series of hook ups between the Shuttle Atlantis and Mir, as he prepared to take up residency on the Russian Station he had seen from a close distance during his previous mission. 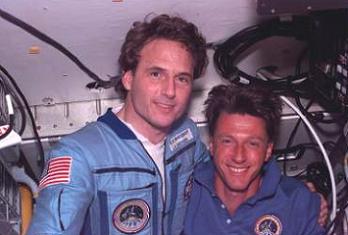 Docking between Atlantis and Mir occurred on May 16 over the Adriatic sea. Over the course of the five day docked mission, Atlantis’ crew transferred 7,310 lbs of water and supplies to and from Mir – setting a record for the amount of supplies transferred between two space vehicles.

After nearly five days of docked operations, Atlantis departed MIR, leaving Foale aboard the Russian outpost for the period including expeditions Mir 23 and Mir 24.

His stay was more eventful than he would have expected, after a Russian Progress resupply vehicle (M-34) crashed into the Station during a redocking test – a test aimed at saving money by removing the Kurs automated docking system from the spacecraft. 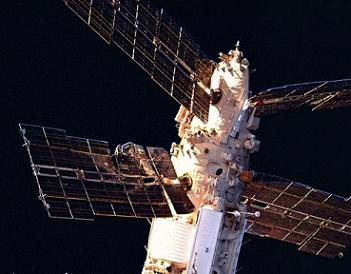 With the redocking under the manual control of Vasily Tsibliyev, the Progress spacecraft collided with the Spektr module, damaging both the module itself, and a solar panel.

As Foale used his expertise in physics to aid Russian ground controllers into correcting the resulting attitude misalignments that resulted from the collision, Tsibliyev and Aleksandr Lazutkin went to work to inspect the collision damage from the interior of the station.

The damage was closely inspected by Foale during Mir 24, as he and Russian cosmonaut Anatoly Solovyev conducted a six-hour EVA in the Russian Orlan spacesuit to inspect exterior damage to the station’s Spektr module. 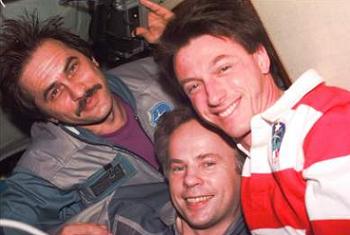 Foale was picked up from Mir by Atlantis in September 1997, on what was her 20th flight and her seventh straight mission to MIR. Docking of Atlantis and MIR occurred on September 27.

In addition to the crew rotation and thousands of pounds of supplies and experiments, Atlantis’ STS-86 mission featured the first joint-US/Russian spacewalk (EVA) during a Shuttle mission.

After closing hatches between the two vehicles, Foale and Atlantis bid farewell to Mir for the last time on October 3, 1997 after nearly six days of docked operations.

Landing occurred on October 6 1997, ending Atlantis’ final mission before she was taken out of service for another Orbiter Modification Down Period. Atlantis would not fly again until May 2000 when she made her first trip to the International Space Station. 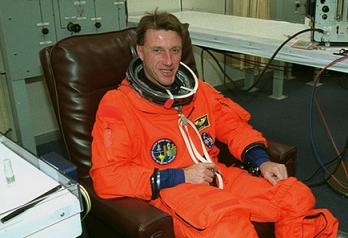 Meanwhile, Foale prepared himself for a new challenge, after being selected for Discovery’s STS-103 mission to carry out an emergency repair on the Hubble Space Telescope.

Originally, NASA had planned to fly the HST Servicing Mission (SM-3) in June 2000, but the failure of a third of six stabilization gyroscopes on the telescope mandated the consideration of a “call-up” mission to preserve the telescope.

Thus, NASA split the HST SM 3 mission in half and moved up the now-manifested HST SM 3A mission on STS-103 into 1999.

Liftoff of Discovery on the truncated STS-103 mission – due to the flight’s proximity to the end of the calendar year, via an issue known as YERO – finally occurred on December 19, 1999. 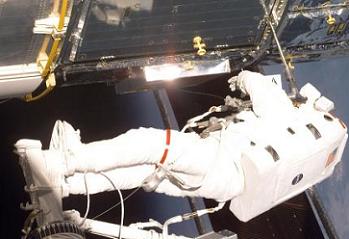 Three spacewalks were performed on the mission – down from the originally scheduled four – which successfully restored Hubble to operating condition. Foale himself ventured out of Discovery’s airlock during an eight hour EVA.

Despite the excitement of his sixth shuttle flight, Foale still had one more spacecraft to visit – the newly born ISS.

Adding the Soyuz to his list of spacecraft he had travelled on, Foale launched as part of a three member international crew on Soyuz TMA-3 in October, 2003.

Arriving at the orbital outpost as part of Expedition 8, Foale became the only American citizen to have served on both Mir and the ISS. 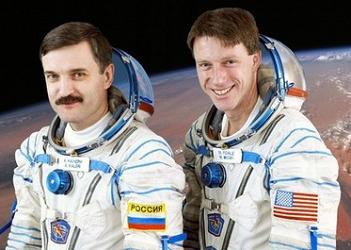 The veteran astronaut became commander of the Station during his six month stay.

Foale conducted a spacewalk during his expedition, alongside Alexander Kaleri. However, the EVA was cut short due to a problem with Kaleri’s spacesuit.

Foale and Kaleri departed the station aboard their Soyuz TMA-3 spacecraft in April 2004, along with ESA Astronaut Andre Kuipers, who had arrived with the Expedition 9 crew aboard Soyuz TMA-4 just nine days earlier.

With his space flight days over, Foale – who was awarded both the Yuri A. Gagarin Gold Medal and later a CBE (Commander of the Order of the British Empire) from the Queen, who he escorted during a tour of JSC – remained with NASA until his retirement on August 9. 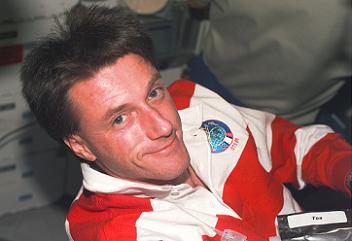 Foale – who joins fellow British born astronauts Nick Patrick and Piers Sellers in retirement from NASA’s astronaut corp – will now enter the commercial sector to work on the development of an electric aircraft.

“I know Mike will go on to do more great things,” added his former commander, General Bolden, “as he continues to support the aerospace industry in his new endeavor.”

ESA’s Tim Peake is now the last remaining active British astronaut, as he prepares for his trip to the ISS in 2015. However, unlike Foale, Patrick and Sellers, Major Peake will have a Union Jack on his arm, following the British government’s decision to finally provide support for British astronauts.