United Launch Alliance are conducting its seventy-fifth launch Wednesday morning, with the Atlas V tasked with deploying the AEHF-3 satellite for the US Air Force. Liftoff from Cape Canaveral Air Force Station. The launch was delayed from its original T-0 due to range weather, prior to successfully launching at 04:10 local time (08:10 UTC).

AEHF-3 is the third satellite in the US Air Force’s Advanced Extremely High Frequency program, a series of high-capacity communications satellites which will augment and eventually replace the Milstar spacecraft launched between 1994 and 2003. Previous AEHF satellites were launched by Atlas V rockets in 2010 and 2012.

The AEHF system is expected to consist of six operational satellites. In 2003 two spacecraft were cancelled to provide additional funds for the Transformational Satellite Communications System (TSAT), however following TSAT’s cancellation it was proposed that these two satellites be reinstated and late last year Lockheed Martin was awarded a contract worth 1.9 billion dollars to produce them.

The fourth AEHF satellite is not expected to launch until 2017, with the two additional spacecraft following in 2018 and 2019.

AEHF-1 was launched by an Atlas V on 14 August 2010. The day after launch, the spacecraft fired its apogee motor to begin its climb into geostationary orbit, however the engine malfunctioned. Attempts to work the problem from the ground were unsuccessful, and another burn attempted two days later also failed, forcing engineers to find an alternative way to get the spacecraft to its operational orbit.

A series of twelve burns were made using the satellite’s attitude control thrusters, raising the orbit’s perigee to around 4,700 kilometers. From there, low-thrust ion engines were used to propel the spacecraft into geostationary orbit. 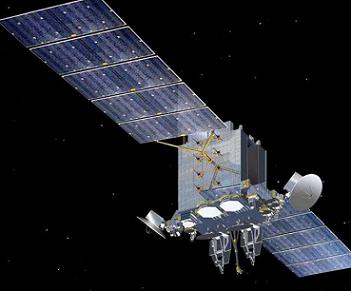 Originally intended to have taken 110 days to reach geostationary orbit the satellite, which was renamed USA-214 after launch, finally arrived on station in October 2011; 436 days after launch. Following on-orbit testing it entered service in March 2012. Two months later the next satellite, AEHF-2, was launched.

Originally scheduled to fly sooner, AEHF-2 was delayed to ensure that the spacecraft was not affected by the same problem as the first satellite, and to allow USA-214 to complete on-orbit testing.

In November 2012 the second satellite, by then redesignated USA-235, entered service. The two operational AEHF satellites are stationed at 69 and 120 degrees west respectively; the former over South America and the latter over the Pacific.

An IHI BT-4 apogee motor is used for initial orbit-raising maneuvers, before Hall Effect thrusters take over to slowly maneuver the satellite into its final orbit. AEHF-3, which will likely be renamed USA-246 in orbit, will provide satellite communications in the Super High Frequency (SHF) and Extremely High Frequency (EHF) bands. 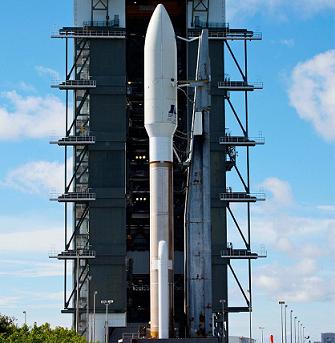 United Launch Alliance’s Atlas V rocket was used to launch AEHF-3. The rocket, whose tail number was AV-041, was the fortieth Atlas V to fly and the third to use the 531 configuration – which was previously used for the two other AEHF launches.

The Atlas V first flew in August 2002, when it launched the Hot Bird 6 spacecraft for Eutelsat. At the time launches were conducted by International Launch Services, who continue to orbit commercial spacecraft by means of Russia’s Proton rocket.

Between 2002 and 2006 ILS conducted six commercial Atlas V launches, with ULA conducting two commercial launches; an ICO mission planned for Atlas before launches were transferred from ILS, and an Intelsat spacecraft. The most recent commercial Atlas launch was conducted in 2009.

In addition to the two true commercial launches, an Atlas was used to launch the US Government’s PAN satellite under a commercial launch contract through Lockheed Martin rather than a direct government contract. That launch also occurred in 2009, two months before the Intelsat launch.

While its high launch costs and congested government launch manifest have made it difficult for the Atlas to compete for commercial satellites, it was able to pick up two contracts to deploy earth observation satellites in missions flying from Vandenberg.

After taking steps to reduce costs to commercial customers, Lockheed Martin announced earlier this month that Mexico’s Secretaria de Communicaciones y Transportes had awarded them a contract to launch the Morelos 3 communications satellite using an Atlas in 2015.

With concerns surrounding the reliability of the Proton and Zenit rockets, and Ariane launches booked up for several years, Lockheed are hopeful that Atlas will be able to attract a larger share of the commercial launch market in coming years.

Atlas has also been chosen to launch Boeing’s CST-100 spacecraft should it be selected for NASA’s Commercial Crew program, with the Sierra Nevada Corporation’s Dream Chaser spacecraft also baselined to launch on it. Both manned vehicles require the development of a Dual-Engine Centaur second stage, since the CST-100 and Dream Chaser will use the 412 and 402 configurations respectively. 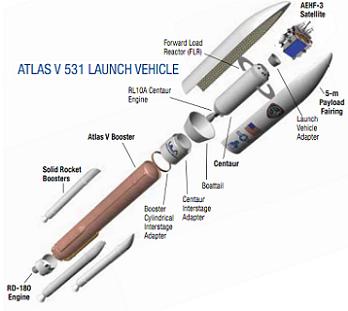 The rocket’s second stage, a Single-Engine Centaur (SEC), is encapsulated along with the satellite within the Atlas V’s payload fairing. For the AEHF launch the short five-meter fairing was being flown. This has a length of 20 meters (68 feet) and a diameter of 5.4 meters (17.7 feet).

The Centaur is powered by a single RL10A-4-2 engine, which burns liquid hydrogen and liquid oxygen.

AV-041’s launch began with the ignition of the first stage engine, at T-2.7 seconds. Liftoff occurred at T+1.1 seconds, once the thrust generated by the RD-180 engine and solid rocket motors exceeds the weight of the fully-fuelled rocket and its payload.

With three solid motors burning, the rocket rose quickly into the sky, beginning a series of roll, pitch and yaw maneuvers T+5.4 seconds which will took it onto the correct trajectory for its ascent to geostationary transfer orbit.

The rocket flew almost due east over the Atlantic, along an azimuth of 90.13 degrees. It took 38.2 seconds for the vehicle to reach a speed of Mach 1, passing through the area of maximum dynamic pressure, or max-Q, eight and a half seconds later. Shortly before the rocket’s speed reached Mach one, the RD-180 throttled down to reduce loads on the vehicle; once max-Q has been passed the engine throttled up to full thrust again. 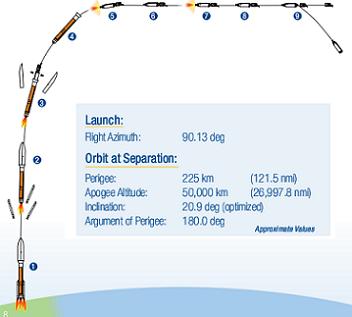 Approximately 90 seconds into the mission, the solid rocket motors burnt out; however they remained attached to the first stage for about 25 seconds to ensure there is no recontact between the solids and first stage. Two SRMs separated at T+114.5 seconds, with the third following suit a second and a half later.

Fairing separation occurred late in first stage flight, about three minutes and 29.1 seconds after liftoff. Five seconds later the Forward Load Reactor, a device which attaches to the top of the Centaur to dampen vibrations within the fairing, was also jettisoned. First stage flight ended with BECO, or Booster Engine Cutoff, at four minutes and 17.3 seconds after launch, when the RD-180 was shut down having expended its propellant.

The target orbit for AEHF-2 is a supersynchronous transfer orbit, with an apogee far higher than geostationary orbit to provide additional energy to the spacecraft, reducing the fuel necessary to raise its perigee to geostationary altitude. The planned separation orbit is 225 by 50,000 kilometers (140 by 31,000 statute miles, 122 by 27,000 nautical miles) at an inclination of 20.9 degrees, with an argument of perigee of 180 degrees. 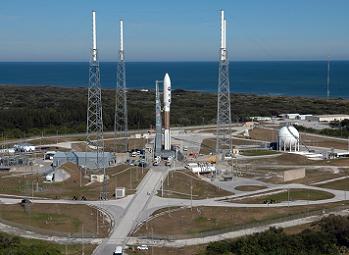 AV-041 launched from Space Launch Complex 41 (SLC-41) at the Cape Canaveral Air Force Station. SLC-41 was built in the late 1960s for the Titan IIIC rocket, which first flew from the facility in December 1965. Wednesday’s launch marks the sixty-first launch from the pad, which was completely rebuilt between 1999 and 2002 to support the Atlas V.

Amongst the spacecraft launched from the complex in the past is Voyager 1, which was recently confirmed to have left the heliosphere and passed into the interstellar medium. Its launch from Launch Complex 41 as it was then designated, occurred on 5 September 1977 atop a Titan III(23)E – a Titan 23 vehicle with a Centaur-D1T upper stage.

AEHF-3 was the ninth ULA launch of 2013, and the sixth to use an Atlas V. The year began with an Atlas V launching NASA’s TDRS-K communications satellite from Cape Canaveral, followed in early February by another Atlas launch from Vandenberg with Landsat 8. Further Atlas launches in March and May deployed SBIRS-GEO and GPS satellites respectively. 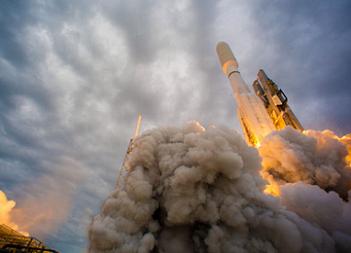 The most recent Atlas launch occurred on 19 July, with an Atlas V 551 deploying the MUOS-2 for the US Navy. That mission successfully carried its cargo into geosynchronous transfer orbit. Since then, ULA has launched two Delta IVs; the first in early August carried another WGS satellite, while later in the month a Delta IV Heavy flew from Vandenberg with an Enhanced Crystal satellite, NROL-65 or USA-245, for the NRO.

Following Wednesday’s mission, ULA is expected to conduct three more launches by the end of the year. The next one, scheduled for 17 October, will see a Delta IV deploy a GPS navigation satellite for the US Air Force.

In November an Atlas V will send NASA’s MAVEN spacecraft on its way to Mars, while a December Atlas launch from Vandenberg will carry NROL-39 for the National Reconnaissance Office – which is expected to be a Topaz radar imaging bird.

The next US orbital launch is expected to occur later on Wednesday, with an Antares scheduled to lift off from Pad 0A at the Mid-Atlantic Regional Spaceport carrying Orbital Sciences Corporation’s Cygnus Orb-D1 mission; the maiden flight of the Cygnus spacecraft.

Following an in-orbit demonstration the Cygnus is expected to arrive at the International Space Station next week. Liftoff is currently scheduled for a fifteen-minute window opening at 10:50 local time (14:50 UTC). The Cygnus spacecraft’s propulsion system uses the same engine as the AEHF-3 satellite.