Japan’s HTV-4 cargo vehicle has departed the International Space Station (ISS) ahead of a fiery plunge back to Earth. The spacecraft delivered vital supplies both for the crew and the Station itself during its mission, with its final role now involving a cargo of ISS trash that will be disposed off during its destructive re-entry.

This HTV, named “Kounotori” (White Stork), is part of the Japan Aerospace eXploration Agency (JAXA) contribution to the ISS program, and was the fourth vehicle to visit the Station, following HTV-1 from September-October 2009, HTV-2 from January-March 2011, and HTV-3 from July-September 2012.

HTV-4’s eight rack bays, all of which were filled with HTV Resupply Racks (HRRs), were packed with food, water, hygiene items, clothing, spare parts, personal items, and scientific experiments for the ISS crew.

All the items were removed and stored on the ISS during its docked operations over its one month stay.

HTV-4 also delivered a small humanoid robot passenger, known as Kirobo (Kibo Robot Project), which, while much smaller than its bigger cousin Robonaut, has the ability to interact with humans via speech.

Kirobo will stay aboard the ISS until December 2014 to test human-robot voice interaction in space, prior to being returned to Earth.

In addition to its internal cargo located in the PLC, HTV-4 brought with it a large amount of external cargo. The external cargo consisted of two spare parts – or “Orbital Replacement Units (ORUs)” – and one new experiment for the outside of the station. 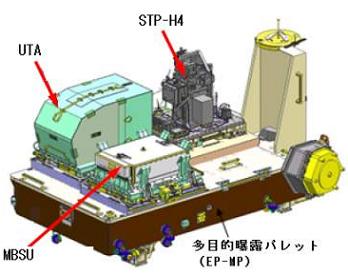 The efforts to transfer the ORUs involved a series of complex robotic operations, involving the Space Station Remote Manipulator System (SSRMS), Special Purpose Dexterous Manipulator (SPDM), and Mobile Transporter (MT) to remove the external ORU’s from HTV-4 and install them on Station.

All of the operations were completed successfully and on schedule, allowing for Wednesday’s on-time departure. 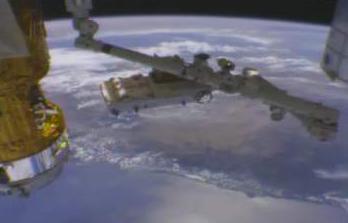 With HTV-4’s cargo fully transferred – and trash items loaded into its place – the Common Berthing Mechanism (CBM) hatches between the vehicle and the ISS were closed, in preparation for HTV-4’s departure from the Station on Wednesday. 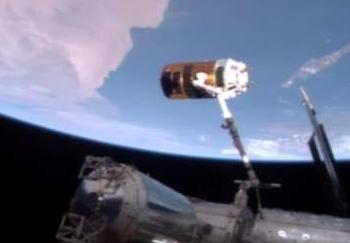 Following CBM vestibule depressurization and removal of all 16 CBM bolts (in four stages of four bolts), HTV-4 was unberthed from the ISS with the SSRMS at approximately 12:02 PM GMT.

Over the following few hours, the SSRMS manuvered HTV-4 to the release position around 30 feet below the ISS, following which, with both ISS and HTV-4 thrusters inhibited, the SSRMS ungrappled HTV-4 at 4:20 PM GMT, signifying its release from the ISS.

The release was slightly delayed due to a small misalignment in the required release attitude.

After a period of 90 seconds, the ISS crew sent the retreat command to HTV-4, which initiated the departure sequence burns.

Approximately two days after release, HTV-4 will conduct a series of de-orbit burns for a destructive re-entry over the Pacific Ocean.

HTV-4’s scientific utility will continue even after its destruction however, since two re-entry payloads are stowed inside HTV-4 to gather data to compare to computer models, in order to improve knowledge of re-entry characteristics.

A specific re-entry payload inside HTV-4 is the Japanese-built i-Ball, which will record actual video footage of the HTV-4 break-up and disintegration, prior to parachuting to a landing in the Pacific Ocean for recovery and extraction of the on-board video data.

Orion may require 30 hour orbital checkout prior to TLI