NASA’s latest mission to the Moon launched aboard an Orbital Sciences Minotaur rocket Friday night. Liftoff of the Lunar Atmosphere and Dust Environment Explorer from the Wallops launch facility was on schedule at (23:27 EDT) 03:27 UTC on Saturday.

The Lunar Atmosphere and Dust Environment Explorer, or LADEE, is the fifth NASA mission to the Moon in recent years; since 2009 the Lunar Reconnaissance Orbiter, LCROSS, ARTEMIS and GRAIL missions have all been flown.

LADEE is only the seventh US mission to explore the Moon since the end of the Apollo program; the other two missions being Clementine and Lunar Prospector, which were launched in the 1990s.

The only other NASA spacecraft to have visited the Moon since Apollo 17 have done so for purposes other than lunar exploration; such as gravity-assist flybys performed by the International Cometary Explorer in the early 1980s, and Explorer 49 being placed into selenocentric orbit to allow it to perform better radio astronomy.

Three spacecraft are currently in operation around the Moon; the Lunar Reconnaissance Orbiter was launched in 2009 and carries a suite of instruments to study the Moon’s surface and surrounding environment.

The other two spacecraft, ARTEMIS P1 and P2, are formerly Earth-orbiting heliophysics satellites performing an extended mission. Launched together with three other satellites as part of the THEMIS mission in 2007, the two spacecraft were transferred to selenocentric orbit after orbital perturbations left them unusable for an extension of their primary mission – which was completed successfully. The goal of the ARTEMIS mission is to study how the Moon and Sun interact.

LADEE will join LRO and ARTEMIS in selenocentric orbit when it arrives at the Moon next month. 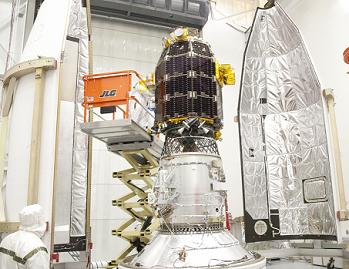 Built by NASA’s Ames Research Center, LADEE is a 248 kilogram (547 lb) spacecraft. It carries 135 kilograms of propellant for a total gross mass of 383 kg (844 lb). The spacecraft is built around the Ames Research Center’s Modular Common Spacecraft Bus, which NASA hope will allow the use of common designs and components for future missions.

The Modular Common Spacecraft Bus is designed around a series of separate assemblies, or modules; LADEE consists of an extension module, a payload module and a bus module.

LADEE’s extension module, at the rear of the vehicle, contains the spacecraft’s fuel tanks and propulsion system. A High Performance Apogee Thruster (HiPAT), or R-4D-15, main engine will deliver 455 newtons (102 lb) of thrust while four smaller thrusters will be used for attitude control. The spacecraft is fuelled by hydrazine, oxidised by mixed oxides of nitrogen, or MON-3.

The Payload module houses two of LADEE’s three scientific instruments, while the bus module, along with its radiator assembly at the front of the spacecraft houses the spacecraft’s core systems; power distribution, avionics, attitude sensors and computers. 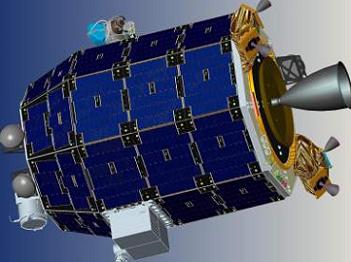 The Ultraviolet and Visible Light Spectrometer, or UVS, consists of two telescopes and a spectrometer. One of the telescopes, the Limb Telescope, will study areas on the lunar surface at either the day/night terminator or in the center of the daytime region. A second telescope will be pointed towards the sun, looking for variations in the solar flux caused by dust grains as light passes through the lunar atmosphere.

The spectrometer operates at wavelengths between 0.23 and 0.81 microns; from the very near-infrared, through the visible spectrum to the middle ultraviolet. Spectroscopic data will allow scientists to study the composition of the lunar atmosphere and any dust grains observed. It is hoped that the instrument will be able to detect ionized water molecules in the atmosphere.

The Ultraviolet and Visible Light Spectrometer is based on an instrument flown aboard the LCROSS spacecraft, which impacted the moon in 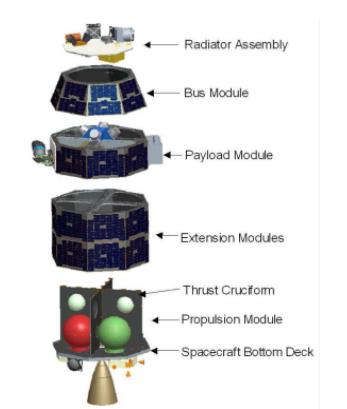 LADEE’s second spectrometer, the Neutral Mass Spectrometer, is a mass spectrometer – an instrument which measures the abundances of atoms or molecules against their mass. Particles are ionized and subjected to a magnetic field, with their mass being determined by how far the magnetic field deflects them. The spectrometer can also conduct measurements on samples which are already ionized.

The Neutral Mass Spectrometer will primarily be used to study the presence of noble gases in the moon’s atmosphere, which could indicate physical processes which have occurred on the moon.

LADEE’s third instrument, the Lunar Dust Experiment or LDEX, is a particle counter which will measure dust impacts by using an ionizing target to produce an electrical charge whenever a particle impacts the detector. LDEX can detect particles down to one micron in diameter.

In addition to these three instruments, LADEE is carrying the Lunar Laser Communications Demonstration payload, a technological experiment aimed at using lasers to transmit data to Earth – which is intended to provide a higher data rate than radio signals.

Despite the presence of the communications experiment, LADEE’s primary downlink will still be a traditional radio link via a medium-gain antenna with an s-band downlink. The spacecraft is powered by solar panels mounted around its body, which also charge a 28 volt rechargeable lithium-ion battery, with a capacity of 24 amp-hours, as a backup. The solar panels can generate 295 watts of power.

LADEE’s launch marked the maiden flight of Orbital Sciences Corporation’s Minotaur V rocket. A five-stage version of the Minotaur IV rocket, the Minotaur IV consists of the four stages of a Minotaur IV+ topped with a Star-37FM. 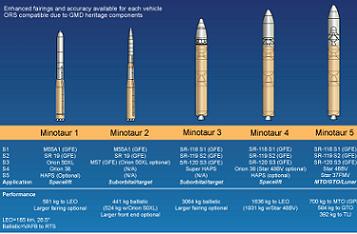 Two months later a launch from the Kodiak Launch Complex in Alaska orbited STP-S26; a collection of experimental satellites for the US military and NASA. Subsequent launches carried a second HTV-2, and the TacSat-4 experimental communications satellite.

Orbital Sciences’ Minotaur rockets are based around retired missiles and as such are prohibited from use on commercial missions. This restricts them to primarily flying military payloads, with the occasional NASA satellite if no other suitable rocket can be found.

LADEE was originally scheduled to launch on a Delta II rocket, as a secondary payload along with the GRAIL spacecraft. Mass increases with the GRAIL mission eventually required that LADEE be removed from the launch; the rocket also had to be upgraded to a Delta II Heavy.

GRAIL, which consisted of two spacecraft named Ebb and Flow, was successfully launched in September 2011. Ebb arrived in orbit of the Moon on 31 December 2011 with Flow arriving the next day. Following a successful mission which mapped the Moon’s gravitational field, GRAIL was deorbited on 17 December 2012. 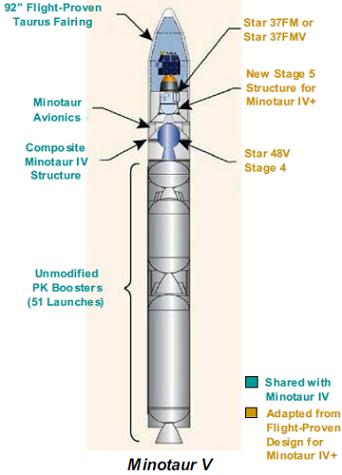 The first three stages of the Minotaur V are taken from decommissioned Peacekeeper missiles, which were developed for the US Air Force during the Cold War. The stages, designated SR118, SR119 and SR120, are solid-fuelled and equipped with hydraulic thrust vectoring for attitude control. These three stages are common with the Minotaur IV.

The fourth stage is a Star-48BV. Derived from the spin-stabilized Star-48B solid rocket motor, which was used as an upper stage on several rockets including the Delta II and Space Shuttle, the BV model has a vectorable nozzle, providing more precise control and eliminating the need for spin-up.

The Star-48BV is an optional component on the Minotaur IV, and has been used once – in the September 2011 launch of TacSat-4. Minotaur IV rockets with the Star-48BV fourth stage are designated Minotaur IV+, and feature the stage in place of the baseline Orion-38 stage.

The Minotaur V’s fifth stage is a Star-37FM. The Star-37FM is spin-stabilized, necessitating it be put into a roll along its center axis before ignition in order to keep stable during its burn. The Star-37FM has previously flown on the Delta II and was used as an upper stage (regarded as part of the payload) on the Titan II(23)G which launched Clementine in 1994.

The launch began with the ignition of the Minotaur’s first stage and the rocket lifting off from its launch pad on Wallops Island.

About 38.5 seconds after liftoff it passed through the area of maximum dynamic pressure, at an altitude of about 10.7 kilometers (6.6 miles) and a velocity of 760 meters per second (1,700 mph).

The first stage burn lasted 56.93 seconds, after which the stage was jettisoned and the second ignited immediately to begin its 78.44-second burn. At second stage burnout, stage separation and third stage ignition occurred immediately. 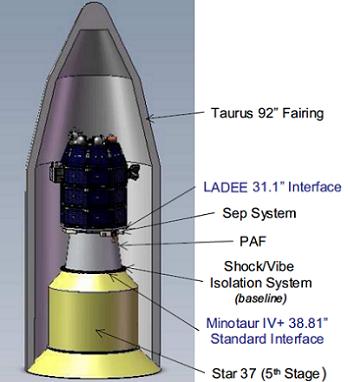 At 27.67 seconds into the 72.25-second burn of the third stage, the payload fairing separated from the nose of the Minotaur. The fairing encapsulates the upper stages and spacecraft during the early stages of flight, protecting them from the atmosphere before the rocket reaches space.

Both the fourth and fifth stages are expected to reach orbit along with the payload. In order to minimize the risk of the spent stages exploding and producing large amounts of debris, they will be safed by means of RCS propellant depletion maneuvers. 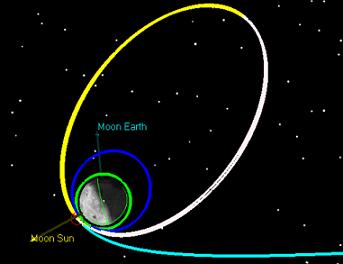 LADEE’s initial deployment orbit does not reach the Moon. Instead, it will make three “phasing orbits” of the Earth. Trans-lunar injection will occur at perigee on the third orbit, when the spacecraft’s engine will fire to increase the altitude of its apogee to within the Moon’s sphere of influence. Lunar orbit insertion (LOI), via a three-minute engine burn, is expected to occur no earlier than 6 October.

Following LOI, LADEE will be placed into a circular orbit around the moon, at an altitude of 250 kilometers (155 miles, 135 nmi) for its commissioning phase. This is expected to last 40 days, with LADEE’s systems and instruments being checked out and the orbit lowered to 75 kilometers (47 mi, 41 nmi) altitude.

For science operations, LADEE will be maneuvered into an orbit with a periselene of 50 kilometers, and an aposelene of 150 km (31 by 94 mi; 27 by 82 nmi). The science phase of LADEE’s primary mission is expected to last 100 days.

Once this is complete, the spacecraft’s orbit will be left to decay naturally, however data will continue to be collected from the spacecraft until it impacts the moon. 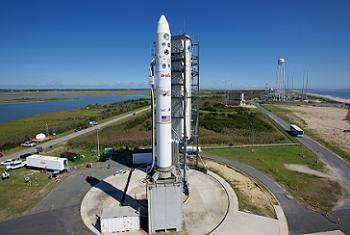 The launch of LADEE was the first time a Peacekeeper-based Minotaur has flown from Wallops Island. The launch complex; Launch Pad 0B (LP-0B) has previously supported four Minotaur I missions and the unsuccessful suborbital launch of the ALV X-1 rocket by Alliant Techsystems.

The two commercial launch complexes at Wallops Island, Pads 0A and 0B, form the Mid-Atlantic Regional Spaceport, or MARS. Pad 0A was built in the early 1990s for the Conestoga rocket, an abandoned program which produced a single, failed, launch in 1995.

The next launch from MARS is expected to occur in the next two weeks, and will also be the next launch for Orbital Sciences. That mission is the launch of the first Cygnus spacecraft to the International Space Station, atop an Antares rocket flying from Pad 0A.

The next launch from Pad 0B is scheduled for 4 November; with a Minotaur I launching ORS-3, a multi-satellite payload consisting of at least 25 spacecraft.

No further Minotaur V launches are currently manifested and future launches are likely to be uncommon due to the limited number of suitable payloads for it. The next Peacekeeper-based Minotaur launch is slated for late 2015, with an as-yet undisclosed payload on a Minotaur IV.

(Images via Orbital and NASA).