Sierra Nevada Corporation’s Dream Chaser ETA (Engineering Test Article) may have successfully passed the key milestones of her approach-and-landing free-flight test on Saturday, despite taking a tumble on Edwards Air Force Base’s Runway 22L. Prior to the failure to deploy the left landing gear, the ETA enjoyed a flawless debut flight.

With an appearance of a baby orbiter, the Dream Chaser has won the affections of many space flight followers.

However, her main goal is to win continued support from NASA, per the Commercial Crew Program (CCP), with an end goal of providing domestic crew access for NASA astronauts heading to the International Space Station (ISS).

All of three of the major suitors for the role are currently working through their milestones as part of NASA’s Commercial Crew initiatives, with Dream Chaser’s free-flight classed as one of the key objectives for SNC’s ambitions. 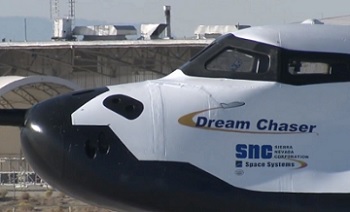 Technically, the ETA – having undertaken numerous Captive Carry tests on the end of a cable attached to a sky crane helicopter – achieved “99 percent” of the key test objectives during her debut flight at the Dryden Flight Research Center on Saturday.

Released from the Erickson Air-Crane helicopter after one final Captive Carry test, the ETA earned her wings via stable flight, with the flight computers easing the vehicle on to the intended glide slope via a few delicate – and smoothly executed – maneuvers.

Just seconds away from touching the runway 22L at Edwards, the ETA’s nose skid and right landing gear lowered, albeit with the notable absence of the left landing gear, which remained inside the body of the vehicle.

Touching down on the center-line, the ETA’s flight computers attempted to compensate, before she eventually leaned over to her left hand side, prior to skidding off the runway.

Digging into the sandy surroundings of the strip, the ETA took a tumble, flipping over and coming to rest in an upright position. Ironically, her left landing gear – almost comically – decided to deploy after the event.

Explaining the Events of the Test:

A teleconference featuring Mark Sirangelo, head of SNC’s Space Systems, was conducted on Tuesday, allowing for an in-depth overview of the test events. 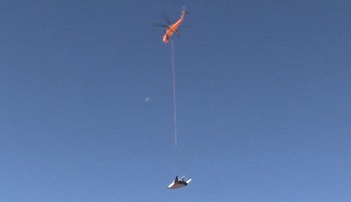 Following a series of checkouts on the ground, the ETA was lofted into the air via the helicopter at around 10am local time.

Over the course of the following hour in the air, further tests were conducted on the ETA, in preparation for her first release from the three attach points atop of the Dream Chaser’s fuselage – including a simulated drop, as had been conducted during some of the previous Captive Carry tests.

The next step was to increase the altitude to 5,500 feet, before conducting several passes over the drop zone and runway.

“All the conditions for pre-flight were met,” noted Mr. Sirangelo. “The vehicle had ‘full greens’ as we call it and all systems were operational.” 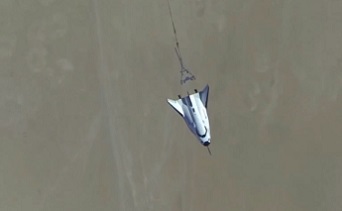 At 11:05am local time, the test director – a former Shuttle astronaut – gave his “GO” for the initiation of the drop, via the command of “release” three times on the flight loop.

Flying on her own for the first time in her career, the ETA began her flight at 12,500 feet – and ably answered some of the key questions, such as her ability to be air-worthy.

“Despite all the computer modelling and simulations, there had not been a lifting body of this type flown since the 1970s,” added  Mr. Sirangelo. “We really wanted to make sure this design would fly. 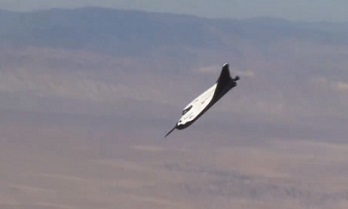 “In the first five or ten seconds, we knew very quickly it was going to fly and fly very well.”

Once released, the first act of the ETA was to head into steep down angle of around 50 degrees in order to pick up speed.

The first real test was to see if the ETA would pull up from the dive, via its completely autonomous flight computer system.

“After a period of approximately ten seconds of the steep dive, the commands were given by the vehicle – as predicted – to begin the pull out of the dive and begin the glide into Edwards,” Mr. Sirangelo continued. 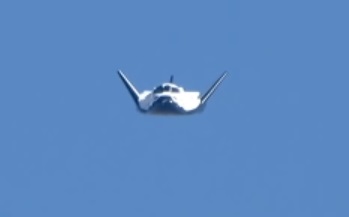 “That command was successful, in fact all the commands throughout the flight were successful.”

For the next 30 seconds, the ETA began refining her approach to the runway in preparation for landing. This segment of the flight was also represented as “perfect”.

During this key period of flight, the Dream Chaser showed no difficulties in the air and conducted a very smooth approach to the runway. At the same time, a stream of data was collected by the vehicle and the ground teams via telemetry, a major test objective in itself. 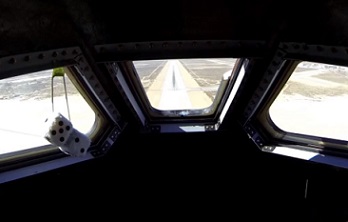 The ETA then entered the phase of actually landing, a sophisticated set of computations, which also went to plan, as the Dream Chaser flared up her nose and lowered her air speed.

“All those commands were issued successfully, as the vehicle set itself up for landing. In the final 20 seconds of the flight, the vehicle acquired the runway and lowered its rate of descent to what had been predicted, at 1.58 feet per second, with an approach speed of approximately 160 knots.”

As the ETA came in for landing, onboard parameters made the decision as to when the landing gear should be lowered. 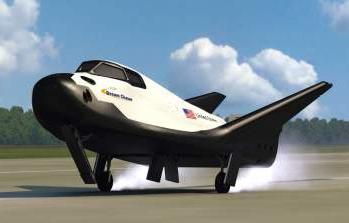 Dream Chaser sports main landing gear both port and starboard on the aft of the vehicle, with a nose skid in place of the conventional nose landing gear wheel.

Both the nose skid and the starboard gear deployed as planned. However, the port landing gear door remained closed.

“The vehicle has a ground radar altimeter on board, that initiates the sequence to open the landing gear and prepare for landing. When that command was given we noticed an anomaly with the left landing gear, which was hung up,” added Mr. Sirangelo. 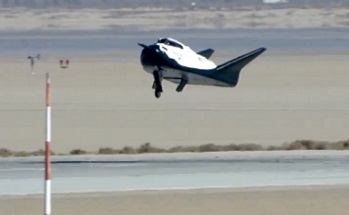 “The vehicle did touch down successfully, but the vehicle’s software also noted it was having some difficulties (per the lack of the port gear deployment) and commanded the controls to compensate for that.”

However, with “weight on wheels” during rollout, the vehicle began to lean to the left, with the airframe touching the runway, before skidding off the strip in that direction and kicking up a large amount of dust and sand as she went for a tumble. 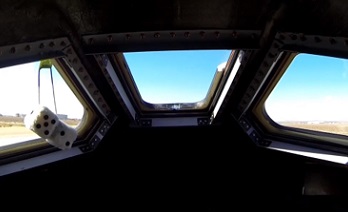 Although Mr. Sirangelo went to pains to avoid portraying exactly what happened during the ETA’s departure from the runway, he did admit the vehicle “rolled”, conveying similar comments to eye witnesses who saw the ETA flip over in the sand.

Amazingly, the ETA survived her unceremonious tumble in remarkable fashion, becoming stationary the right way up. And while she was reported as looking a little worse for wear, most the damage is classed as cosmetic – such as the outer shell’s imitation Thermal Protection System (TPS).

“There was no damage to the runway, no personal injuries, but the vehicle was damaged during its skid and roll off the runway, but we believe it to be repairable.” 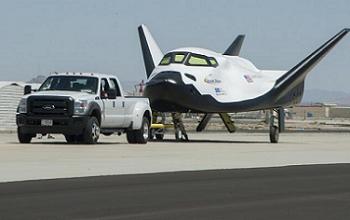 Notably, as previously reported, the gear involved on the ETA is not the same hardware that will be used on future Dream Chasers. For the ETA, the gear was salvaged from a F-5 fighter jet.

It is not yet known as to why the left gear failed to deploy, with an investigation into the anomaly already being set up at SNC.

Given the list of objectives for the test flight, SNC are classing the landing gear issue to be a relatively minor concern. The priority goals related to when the vehicle was in the air.

“What we really wanted to know was if this vehicle could fly, could we control it and could we carry out an amazingly difficult set of tasks for a first vehicle flight,” added Mr. Sirangelo, before noting that even the end result provided his company with some additional – and encouraging – data points. 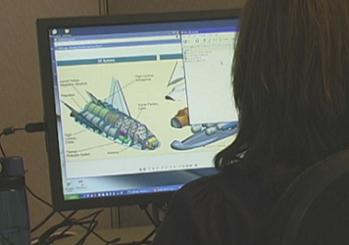 “It provided us with data on how strong the vehicle is. We were able to get into the vehicle quite soon after (the crash) and the pressure vessel/crew compartment was completely untouched by the incident.

“None of the critical hardware was damaged, the flight computers continued to work, which shows the composite structure and airframe is quite stable and quite strong for what we needed to accomplish.”

In conclusion, Mr. Sirangelo rightly noted the overall report card for the test flight was one that holds a large amount of positives, especially based on the list of problems that could have occurred on a flight of this nature.

“What we did come away with was terrific data on the vehicle and the flight characteristics. We were all pleasantly surprised by how well it flew and how strong it flew, which really validated the design.”

The next steps SNC will take involve presenting the data via reviews, which will also involve NASA, who usually take a 30 day period to marry the test results with their parameters for confirming a milestone – under the Commercial Crew Program objectives – with the approach-and-landing free-flight test resulting in an award of $6m to SNC, should CCP managers conclude the test satisfied the contract parameters.

It is likely that upcoming discussion will be the basis of SNC’s forward plan with the ETA, which was only designed for two autonomous flights. 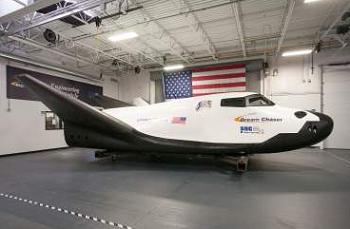 That original goal was to conduct one or two approach-and-landing free-flight tests with this ETA, before returning the vehicle to her home base in Colorado for outfitting ahead of the 2014 crewed version of the test flights.

SNC will evaluate if they will repair the ETA for another automated flight test, or if to ship her back to Colorado for outfitting.

“We will determine (that) if and when we receive enough data from this flight, because we were so successful we think we did receive all the data we need for testing,” Mr. Sirangelo continued. “But we will determine if we do need that second flight, or if we want to bring the vehicle back for its next set of test flights early next year.” 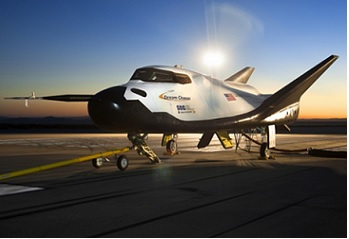 The end result is a potential scenario that the anomalous final segment of the test flight will have no impact on their forward plan.

“From our perspective, we had a very successful day with an unfortunate anomaly at the end. We’re investigating that anomaly, but it did not invalidate any of the data.

“The vehicle will likely be re-flyable in the not too distant future.”

As per the ongoing plan, SNC had already begun work on the next Dream Chaser, the vehicle that will be capable of flying in space. 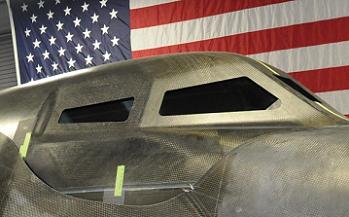 “We’re moving forward with our plans. We had already set up a second production line for vehicles. We have started work on our orbital version – a vehicle that will be taken on an orbital test flight,” added Mr. Sirangelo.

“That started months ago, with our partner Lockheed Martin building the airframe – and that work is taking place at the Michoud Assembly Facility (MAF).

“We are continuing to move that forward quite rapidly.”

The current plan is to conduct an autonomous flight via a launch atop of their commercial crew partner’s launch vehicle – the United Launch Alliance Atlas V rocket – in 2016, ahead of a crewed flight in 2017.

Regardless of the dramatic end to the ETA’s first flight on her own, she has undoubtedly created her own legacy, one that will be remembered for all the right reasons, should her siblings return domestic crew capability to her nation.