The GOCE satellite was developed by an industrial consortium of 45 companies, distributed over 13 European countries. It embodied many world-firsts in its design and use of new technology in space to map Earth’s gravity field in unprecedented detail. 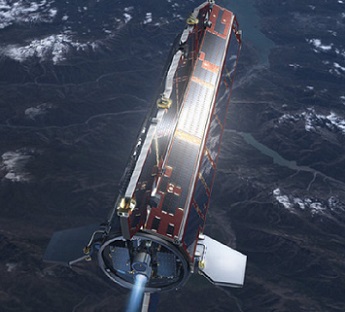 The impressive looking five-metre long satellite was designed to orbit at a very low altitude of just 260 km, due to the gravitational variations are stronger closer to Earth.

GOCE’s main instrument is the Electrostatic Gravity Gradiometer (EGG), a set of six 3-axis accelerometers mounted in a diamond configuration in an ultra-stable structure.

Each accelerometer pair forms a ‘gradiometer arm’ 50 cm long, with the difference in gravitational pull measured between the two ends. Three arms are mounted orthogonally: along-track, cross-track and vertically. The gradiometer proved to be 100 times more sensitive than any sensor of the same type previously flown in space.

GOCE also carried a GPS receiver to be used as a Satellite-to-Satellite Tracking Instrument (SSTI) to supplement the gradiometer measurements. The SSTI consists of an advanced dual-frequency, 12-channel GPS receiver and an L-band antenna.

GOCE’s Laser Retroreflector allowed its precise orbit to be tracked by a global network of ground stations through the Satellite Laser Ranging Service – providing accurate positioning for orbit determination and data products. 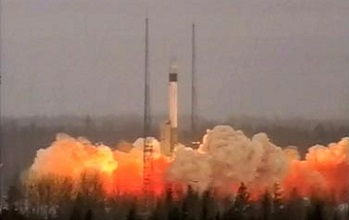 It was launched on March 16, 2009 via a Russian Rockot – a converted SS-19 Russian Intercontinental Ballistic Missile (ICBM).

The original two lower liquid propellant stages of the ICBM, in conjunction with a third stage for commercial payloads called Breeze KM, was optimised for delivering up to 1,950 kg into low Earth orbit. The launch vehicle placed GOCE into a Sun-synchronous, near-circular polar.

With a sleek, aerodynamic design responsible for it being dubbed the ‘Ferrari of space’, GOCE has mapped variations in Earth’s gravity with extreme detail.

Scientists further exploited these data to create the first global high-resolution map of the boundary between Earth’s crust and mantle – called the Moho – and to detect sound waves from the massive earthquake that hit Japan on 11 March 2011, among other results.

In mid-October, the mission will come to a natural end when it runs out of fuel and the satellite begins its descent towards Earth from a height of about 224 km.

It’s current status notes the spacecraft’s xenon tank pressure is now below 5 bar. Ion propulsion is expected to stop after pressure drops below 2.5 bar – foreseen on 19 October.”Once GOCE has run out of fuel, the orbit will start decaying. It will take about two to three weeks before the spacecraft re-enters the Earth’s atmosphere,” noted ESA information.

“We will initially keep operating the spacecraft, switching it off when its subsystems stop working due to the harsh environmental conditions at lower altitudes. This marks the end of activities for the GOCE flight control team.”

The descent and the final re-entry will be monitored closely by ESA’s Space Debris Office, in the frame of an international campaign of the Inter-Agency Space Debris Coordination Committee (IADC).

“We have collected a wealth of science data over the last 4.5 years. GOCE has lasted much longer than the originally planned 20 months thanks to the low solar activity in the last few years,” added ESA’s Christoph Steiger.

“To get even more precise gravity measurements, in its last year of life, the orbit of GOCE was lowered from 255 km down to an extremely low altitude of only 224 km. The results are fantastic – we have obtained the most accurate gravity data ever available to scientists.

“Personally, I feel sorry to see GOCE, a project on which I have spent seven intense years,  come to end. Then again, it is also a good feeling to know that we have really gotten the most out of this mission before its natural end – much more than what we could have hoped for.”