The processing flow is heating up for the first Orion set to launch into space, as key elements of the Exploration Flight Test -1 (EFT-1) mission arrive for integration at the Kennedy Space Center (KSC). With the inert Launch Abort System (LAS) now pieced together, Wednesday saw the arrival of Orion’s Heat Shield, flown in via a Super Guppy aircraft.

The uncrewed flight of Orion – otherwise known as the Multi-Purpose Crew Vehicle (MPCV) – will be NASA’s first real step towards transitioning back to Beyond Earth Orbit (BEO) exploration, allowing the spacecraft – that will carry NASA astronauts to destinations as far away as Mars – to stretch its legs during what will be a critical test for the spacecraft.

Although this EFT-1 mission will occur several years before a crew flies in the spacecraft, the test will provide valuable early data, which can be fed into Orion’s development, thus avoiding any “late” changes to the vehicle that could cause schedule impacts.

As such, data from the mission will be directly fed into Orion’s Critical Design Review (CDR) in 2015.

Because Orion’s launch vehicle of choice – the Space Launch System (SLS) – won’t be available for the EFT-1 mission, a Delta IV-H was purchased for the role of lofting Orion into space, with the EELV’s Upper Stage providing the second leg of sending the spacecraft into an orbital path that will mimic the vehicle’s return from a deep space mission. That launch vehicle is scheduled to arrive at KSC in the March, 2014 timeframe. 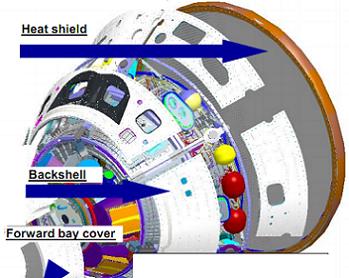 Unlike the Space Shuttle orbiters, the main business end of the heatshield = the blunt end of Orion – won#t be covered in tiles. Instead it will use an ablative material, which was also used on the Apollo capsules.

Following its design review, the heat shield began to take shape via the mating of the “skin” onto the titanium support skeleton at Lockheed Martin’s Waterton Facility near Denver – which was also the site for a large amount of Orion testing on the Ground Test Article (GTA). 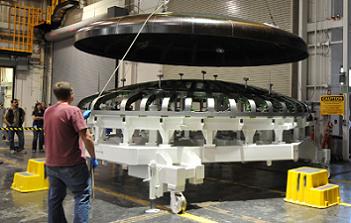 The heat shield was then shipped to Textron in Wilmington for the installation of its ablative protective coating.

The skin and skeleton will help give the spacecraft the strength to withstand its impact with the water’s surface upon landing in the Pacific Ocean, and provide the structure for the AVCOAT coating that will protect the vehicle and its crew from the nearly 5,000-degree Fahrenheit temperatures that they would experience during a 27,000-mph return from Mars.

Before and during its manufacture, the heat shield material was subjected to arc-jet testing NASA’s Ames Research Center in California and NASA’s Johnson Space Center (JSC). 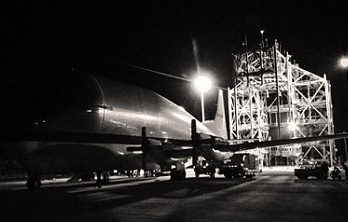 Following its completion, the heat shield – the largest ever constructed – was then loaded on to a Super Guppy aircraft, prior to Wednesday’s journey to the Shuttle Landing Facility (SLF) at KSC.

“The heat shield completion and delivery to Kennedy, where Orion is being prepared, is a major step toward Exploration Flight Test-1 next year,” noted Dan Dumbacher, NASA’s deputy associate administrator for exploration systems development in Washington.

“Sending Orion into space for the first time is going to give us crucial data to improve our design decisions and develop Orion to send humans on future missions to an asteroid and Mars.” 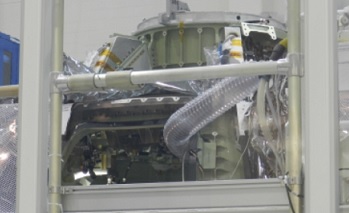 The Heat Shield is scheduled to be unloaded and transported to the Operations & Checkout (O&C) building on Thursday, where it will greet the EFT-1 Orion that is deep into its outfitting processing ahead of its launch next summer.

Another element that will heading uphill on EFT-1 will be an inert Launch Abort System (LAS).

Most of the LAS won’t be active for the flight – not least because there will be no humans on board the Orion. 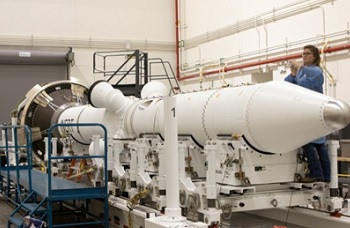 However, the jettison motor will be active, allowing for a separation testing during the ascent phase. As such, this will be a nominal detachment of the LAS when it is no longer required during the flight into space, as opposed to an actual abort test.

“The LAS will be the first actively controlled launch escape system ever flown, and it incorporates a throttleable solid-rocket motor for attitude control, a novel reverse-thrust abort motor, advanced solid propellants, and lightweight composite materials in the abort motor case and fairing,” noted LAS project manager for NASA, Kevin Rivers.