Expedition 38 Commander Oleg Kotov and Flight Engineer Sergey Ryazanskiy broke the Russian spacewalk duration record on the outside of the International Space Station (ISS) on Friday, following their work on photographic and scientific equipment. However, the main EVA objective suffered a failure after one of two Canadian cameras failed to provide data to the ground during testing.

Kotov and Ryazanskiy – donning their Orlan-MK 6 and 4 spacesuits – began their EVA by exiting the Pirs airlock at 1pm UTC. This is the third spacewalk within a week, following the two recent US EVAs.

The spacewalk was the fifth in Kotov’s career and the second for Ryazanskiy. Kotov was designated as extravehicular (EV) crew member 1 and Ryazanskiy as EV2. Both used US helmetcams – as is usual – but for this EVA, Kotov was also donning a GoPro camera on his forearm. 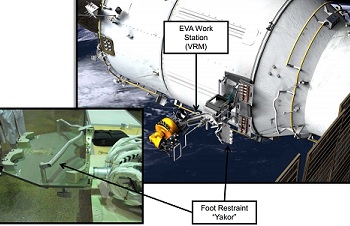 Their main task was to install a pair of cameras on the Zvezda Service Module as part of a Canadian commercial endeavor designed to downlink Earth observation imagery and to refresh experiments.

These two cameras were delivered to the ISS onboard Progress M-21M at the end of November, a cargo resupply ship that had to be docked manually by Kotov. 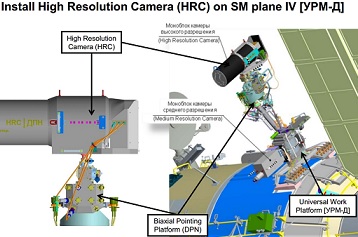 Known as the “Yakor”, the foot restraint was installed on the Service Module EVA Work Station.

The High Resolution Camera (HRC) was installed on the Service Module plane IV, followed by the Medium Resolution Camera (MRC) installation in the same area. A checkout via the ground showed the HRC was providing good telemetry, while the MRC proved to be troublesome – an issue that would prove to be a major turning point later in the EVA.

The spacewalkes then removed the protective lens from both camera systems and route cables and connections, before “bundling” the MRC cable reel and HRC lens cover for jettison.

The jettison took place just over three hours and 30 minutes into the EVA and was conducted by Kotov.

EV-1 then translated to the DC-1 EVA Ladder, while EV-2 moved to the Vsplesk experiment, where he demated two connections, freeing the monoblock from the Service Module.

EV-2 bid farewell to the experiment – that arrived on Station in May of 2008 via the Progress M-64 flight – by jettisoning it safely away from the Station. Ryazanskiy had a great view of Earth as he released the payload in safe trajectory away from Station.

The among the remaining tasks – such as the retrieval of a cassette container – the spacewalking duo installed the Seismoprognoz experiment on the Service Module hand rail area, a 32 kg unit that also arrived on the recent Progress M-21M cargo ship.

By this point, MCC-Moscow noted they still had no connectivity with the second camera to be installed, the MRC, resulting in a forward plan to remove both cameras and return them back inside the ISS.

With the HRC apparently working well, Kotov questioned the decision, asking “both cameras??”, before the plan was reconfirmed. “Well guys, it happens” added MCC-M.

The task called for the careful removal of two items of payload from the frame, before releasing it from the Service Module and once again jettisoning what is a relatively large structure out into space. However, with the EVA replanned to remove the cameras, this task was cancelled. 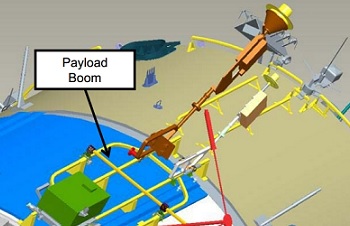 Also cancelled was the installation of a payload boom at the worksite to re-host the two experiments that were to be previously housed on the “MPAC&SEED” frame. The duo were also to extend a small antenna on the side of the Pirs airlock, relating to the Seismoprognoz experiment.

The final planned task was to take photo documentation of insulation in the immediate area. However, with the EVA fully dedicated to returning the cameras into the ISS, the spacewalkers knew that task alone would extend their EVA.

And that proved to be the case, breaking the previous Russian EVA record duration by 37 minutes, as RS-37 came to a conclusion after an epic eight hours and seven minutes.