The United States Navy are deep into preparations for supporting the key test milestones for NASA’s Exploration Flight Test -1 (EFT-1) mission. The Navy are involved both on sea and in the air for the recovery testing set to take place off the coast of California early this year, while arranging for the use of naval assets during the latter part of debut for NASA’s newest spacecraft in the summer.

As NASA’s transition heads towards the half way point between the end of the Space Shuttle Program and the start of the Agency’s return to Beyond Earth Orbit (BEO) exploration, famed relationships of earlier years are starting to align towards the new path.

The United States Navy’s long and trusted relationship with NASA once again employs historical synergy, via a modernized role that points back to the legacy of early space missions. 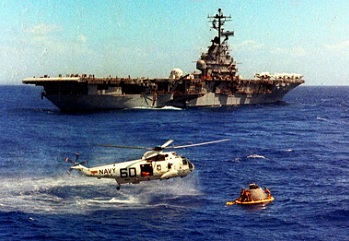 As previously confirmed, the US Navy have already been recruited to provide a post-mission role for the first three Orion missions, a role they last conducted during the pioneering missions of Mercury, Gemini and Apollo.

While the opening mission will launch Orion atop of a United Launch Alliance (ULA) Delta IV-Heavy, the spacecraft’s return will closely mimic its return to Earth from deep space, with Exploration Flight Test -1 (EFT-1) completing its high energy re-entry with a splashdown off the coast of California.

Although the spacecraft will be uncrewed during its debut, EFT-1 will provide the first full “dress rehearsal” for recovering the Exploration Mission -1 (EM-1) Orion in 2017, followed by the first crewed mission in 2021, known as EM-2.

In preparation for the EFT-1 mission, two major tests involving the US Navy were planned by NASA, with the first already completed via the recovery of an Orion at the Naval Station Norfolk, in Virginia. 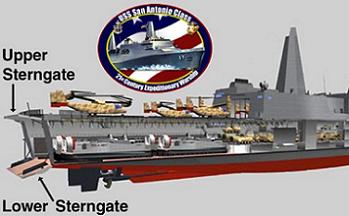 This was the first time Orion was greeted by a US Navy Landing Platform-Dock (LPD) ship, an amphibious ship that has both a flight deck and a well deck.

The well deck is in the lower portion of the ship and has a large door on the stern of the ship that can be opened to support landing craft or other amphibious vehicles.

Known as a Stationary Test – given the LPD (USS Arlington) was secured in station on the side of a pier – divers attached tow lines and led the capsule to a flooded well deck. 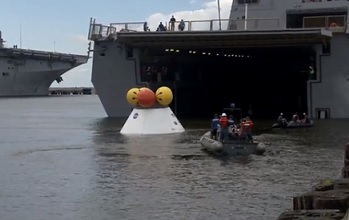 With the capsule in position over a specially constructed recovery cradle, the water drained until the capsule settled.

“The Navy is excited to support NASA’s continuing mission of space exploration. Our unique capabilities make us an ideal partner for NASA in the recovery of astronauts in the 21st century – just as we did nearly a half century ago in support of America’s quest to put a man on the moon.”

The second test milestone is scheduled to begin at Navy Base San Diego in California early this year.

This test will involve a second LPD (USS San Diego), copying a large amount of the test conducted with the USS Arlington, expect this time the Orion and LPD will be out at sea, providing a scenario with the real sea state conditions expected during EFT-1. 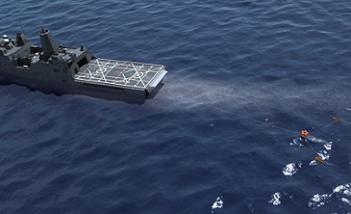 The USS San Diego – a San Antonio-class amphibious transport dock that was commissioned in 2012 before she recently entered active service – will head back to port, docking alongside the pier in Long Beach, California.

The EFT-1 Orion will then be towed from the well deck to a barge, allowing for the handover to Lockheed Martin, the Orion prime contractor, for required post-flight operations.

While US Navy assets in the water will provide key support, the Navy will also be supporting EFT-1 in the air.

As noted by the Navy, their Helicopter Sea Combat Squadron (HSC) 8 are already in training to assist NASA with Orion’s first splashdown. 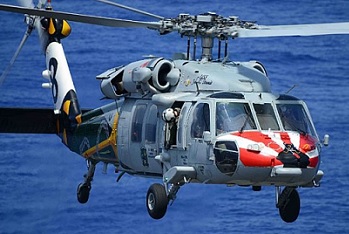 Known as the “Eightballers” of HSC-8, the team operate within US Navy’s 3rd Fleet’s area of responsibility, with their missions including vertical lift search and rescue, logistics, anti-surface warfare, special operations forces support, and combat search and rescue.

The Navy note HSC-8 will embark NASA engineers on two MH-60S Knighthawks to film and monitor the re-entry and recovery of Orion using state of the art debris tracking software and video equipment.

Aside from documenting the initial test phase of this event, NASA will use data gathered from the mission to evaluate parachute deployments and debris patterns to refine Orion’s design prior to the manned launch. 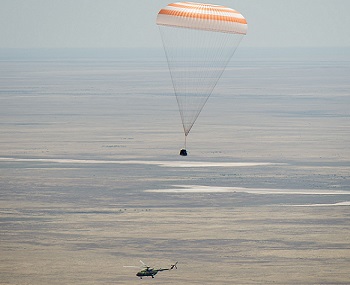 This role is not dissimilar to the role the Russian MI-8 helicopters provide when providing support to returning Soyuz vehicles.

The HSC-8’s aircraft will launch from the transport dock ship USS San Diego (LPD 22) and assist the crews that will recover the craft into the ship’s well-deck.

“(I am) honored to be involved in the beginning stages of the next major phase of space exploration and proud to showcase the multi-mission capabilities of the MH-60S,” noted Cmdr. Derrick Kingsley, HSC-8’s commanding office.