Ariane 5 ECA lofts Astra 5B and Amazonas 4A

Arianespace lofted another two more satellites into orbit – namely Astra 5B and Amazonas 4A – via their Ariane 5 ECA rocket on Saturday. Launch from the European Spaceport in Kourou, French Guiana was delayed by 24 hours due to unacceptable rollout weather. However, Saturday proved to be no problem, with launch occurring at the opening of the window at 10:04pm UTC. 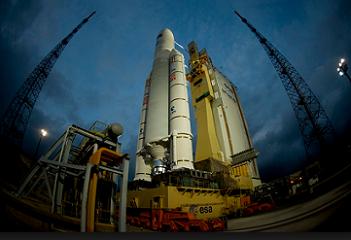 This mission was designated Flight VA216 in Arianespace’s launcher family numbering system and was the 218th launch since operations began with the Ariane series of vehicles in 1979, as well as the 75th flight for the heavy-lift Ariane 5 version.

Riding in the upper position of Ariane 5’s payload “stack” was ASTRA 5B, which will be utilized to extend SES’ transponder capacity and geographical reach over Eastern European and neighboring markets for direct-to-home, direct-to-cable and contribution feeds to digital terrestrial television networks. 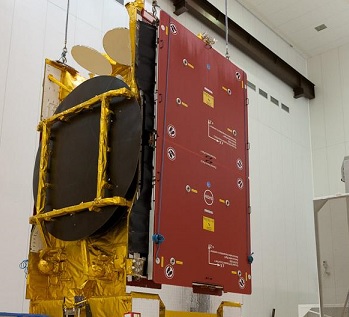 ASTRA 5B was built by Airbus Defence and Space (formerly Astrium) in Toulouse, France, based on the Eurostar E3000 platform. With an estimated liftoff mass of 5,800 kg multi-mission satellite will be located at 31.5 degrees East and carry Ku and Ka-band payloads for the delivery of high-performance Direct-to-Home (DTH) in Eastern Europe and the neighboring markets.

“The launch of ASTRA 5B will be the 39th launch of an SES satellite on board a European Arianespace launch vehicle,” noted Martin Halliwell, Chief Technology Officer of SES.

“Our long-standing relationship is based on this proven track record and shows the continuous confidence we have in Arianespace and our commitment to Ariane as a launch vehicle. We look forward to a successful mission with this longstanding launch partner.”

The lower passenger was HISPASAT’s Amazonas 4A, which will be located at an orbital position 61 degrees West after its deployment by the Ariane 5. 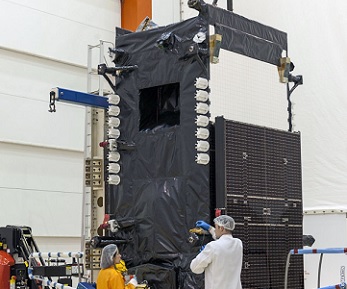 This Orbital Sciences Corporation-produced telecommunications platform will enhance HISPASAT’s relay capacity over Latin America to provide an extended range of communications and television services. With a launch mass of 3,000 kg., Amazonas 4A has a design lifespan of 15 years.

Orbital’s newest satellite delivery represents the 150th spacecraft Orbital has completed for customers in the past 32 years, spanning the global commercial, civil government and military and intelligence space systems markets.

Of these, 78 have carried out commercial communications and imaging missions and 72 have supported government scientific, national security and space exploration missions.

Amazonas 4A was Orbital’s 33rd GEOStar commercial communications satellite to be launched into orbit. Orbital-built satellites have now amassed about 1,100 years of in-orbit experience, a number that will continue to grow as the company is scheduled to deploy up to nine spacecraft in 2014 for commercial communications, space station logistics, scientific research and national security missions. 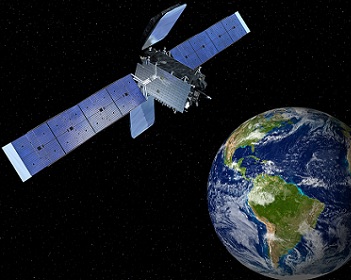 “I want to thank HISPASAT for their confidence in Orbital on this important mission, which will bring significant additional capacity to their Latin American customers for a variety of television and other communications services,” said Mr. Christopher Richmond, Orbital’s Senior Vice President of Communications Satellites.

Following its deployment into a geosynchronous transfer orbit, the Amazonas 4A satellite will undergo several weeks of in-orbit testing to verify that all major subsystems are operating as planned.

Once testing is complete, the spacecraft will be commanded to fire its thrusters to position it at a final orbital location of 61 degrees West Longitude. Day-to-day operations of Amazonas 4A will then be transferred to HISPASAT’s operational team in Madrid.

ESA involved in effort to improve the eyesight of spacecraft