The United Launch Alliance (ULA) used an Atlas V rocket to deploy the DMSP-5D3 F-19 satellite for the US Air Force. Liftoff from Vandenberg Air Force Base was on schedule at 07:46 local time (14:46 UTC) on Thursday. This first attempt launch played into evaluations for which rocket – which has now been confirmed as the Atlas V with NROL-67 – will launch first from Cape Canaveral next week.

The Defense Meteorological Satellite Program (DMSP), which was named the Defense Satellite Application Program (DSAP) until December 1973, began in the early 1960s.

Originally operated by the National Reconnaissance Office, the satellites’ original purpose was to support early reconnaissance satellites by forecasting which areas of Soviet and Chinese territory would be covered in cloud, and which areas would be visible to the satellites. Over time the program has evolved to fulfil other roles, including providing real-time tactical weather data to troops. 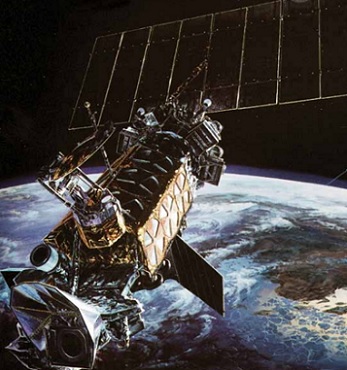 The DMSP-5D3 F-19 satellite was the fifty-second to launch as part of the DMSP program, the thirtieth Block 5 spacecraft, the nineteenth Block 5D and the fifth Block 5D3.

Intended as an interim program pending the introduction of satellites capable of fulfilling both military and civilian roles, DMSP has evolved into one of the longest running series of spacecraft. The satellites are operated by the National Oceanic and Atmospheric Administration (NOAA), who use their data for scientific purposes as well as providing it to the military.

The first DSAP spacecraft, DSAP-1 F-1 or FTV-3501, was based upon the civilian TIROS weather satellite and launched atop a Scout X-2M rocket from the Naval Air Station at Point Arguello, now part of Vandenberg Air Force Base, on 24 May 1962. A second stage anomaly prevented the satellite from achieving orbit; however a successful launch three months later placed DSAP-1 F-2 into orbit.

Scout rockets, purchased from NASA, were used for the first five DSAP launches; making use of three Scout X-2Ms, a Scout X-3M and a Scout X-2B. The poor reliability of these early Scout rockets resulted in subsequent launches switching to Thor rockets. Four spacecraft were launched in pairs atop Thor DM-21 Agena-D rockets in 1964, with the final two Block 1 satellites launching atop Thor LV-2D Burner I vehicles the next year.

Three Block 2 DSAP spacecraft and a single Block 3 satellite were launched between 1965 and 1966, with the second Block 2 satellite failing to achieve orbit. All four launches were performed using Thor LV-2D Burner I rockets, however the upper stage was changed from an MG-18 to an Altair-3.

The Block 2 spacecraft incorporated new infrared radiometers to return more accurate temperature data. The Block 3 satellite was a derivative of the Block 2, intended to provide weather data to forces in Vietnam for use in planning operations. Block 4 satellites, which were launched from 1966 onwards, carried higher-resolution instruments and were able to downlink real-time data to deployed forces.

Block 5 began with the launch of OPS 0054 in February 1970. The first of three DMSP-5A satellites launched in little over a year, it introduced additional instruments and began the program’s move away from the spin-stabilised platforms used by earlier blocks. The Block 5B spacecraft, of which five were launched, replaced the 5A from 1971 until its replacement by the Block 5C in 1974.

By 1976 the last of three DMSP-5C satellites was launched and the 5D series was introduced. The DMSP-5D1 abandoned the cylindrical bus of its predecessors in favour of a new three-axis stabilised platform. Launched in September 1976, DMSP-5D1 F-1 or OPS 5721 became the first satellite to use the new bus which would go on to be used over the next forty years by the DMSP, TIROS and Landsat programs.

Five Block 5D1 satellites were launched, with the last failing to achieve orbit in 1980. The longer lifespans of Block 5 satellites allowed the launch rate to slow to one a year, and to drop further with the introduction of the Block 5D2 in 1982. Over fifteen years, nine satellites were launched. The 5D2 was the first DMSP since the Block 1 to not use the Thor rocket, with the first eight spacecraft launching atop Atlas-E/F rockets and the last aboard a Titan II(23)G. 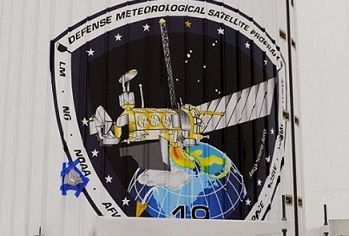 Block 5 DMSP satellites have proven far more reliable than expected which has allowed replacement launches to be delayed, extending the lifespan of the constellation. DMSP-5D3 F-19 was originally delivered to the US Air Force in 1998, spending a decade in storage before being called up for launch. All four Block 5D3 satellites and the last two Block 5D2 spacecraft – launched in 1995 and 1997 – remain operational.

In addition to serving US military and scientific uses, DMSP rainfall data is contributed to the Global Precipitation Mission (GPM), a multinational collaboration to produce near-real-time global maps of precipitation. 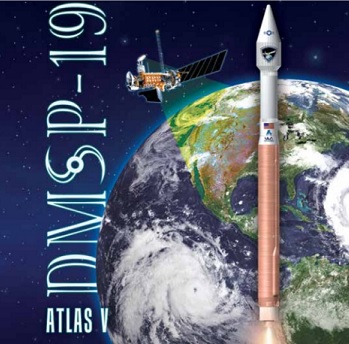 The Operational Linescan System, introduced with Block 5D1, is the satellite’s primary instrument. It is used to image clouds, ice and dust storms and can also be used to observe smoke in the atmosphere. The Special Sensor Microwave Imager/Sounder (SSMIS) is used for atmospheric humidity and precipitation profiling, studying microwave emissions at a range of predefined wavelengths.

The SSUSI package consists of a scanning imaging spectrometer and a nadir-pointing photometer, which combine to measure the intensities of visible and ultraviolet electromagnetic radiation coming from the Earth including the aurorae. SSULI uses another scanning spectrometer to measure more high-energy radiation. SSUSI and SSULI draw upon technology developed for the ARGOS and TIMED satellites launched in 1999 and 2001 respectively.

The remaining sensors comprise the Space Environment Sensor Suite (SESS), collecting data on the environment in which the satellite is operating, the ionosphere and the Earth’s magnetic field.

The satellite’s magnetometer is mounted at the end of a boom deployed from the side of the vehicle. A three-axis fluxgate magnetometer, it will measure variations in the magnetic field along each of the satellite’s axes. SSIES3 uses a Langmuir probe and a collector to study the densities and temperatures of ions and electrons in the ionosphere, as well as the molecular weights of the ions.

From the beginning of the program, DSAP and later DMSP satellites were manufactured by the Radio Corporation of America’s Astro Electronics Division (RCA Astro). RCA was bought by General Electric in 1986, with RCA Astro becoming GE Astro Space. Sold to Martin Marietta in 1993, Astro Space became Lockheed Martin Space Systems following the 1995 merger of Martin Marietta with Lockheed. 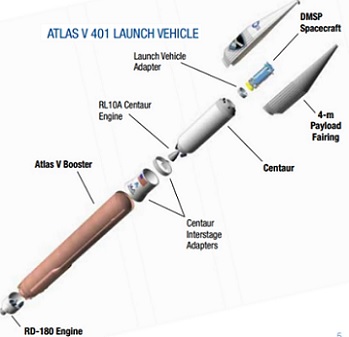 United Launch Alliance used an Atlas V 401, tail number AV-044, to deploy DMSP-5D3 F-19. AV-044 was the forty-fourth flight of the Atlas V and the twenty-first use of the 401 configuration, the rocket’s smallest and most-flown variant.

The rocket’s first stage is a Common Core Booster (CCB), powered by a single RD-180 engine. Derived from the RD-170 series developed in the Soviet Union for the Zenit and Energia rockets, the RD-180 has two chambers and burns RP-1 propellant oxidised by liquid oxygen. Up to five Aerojet Solid Rocket Motors (SRMs) can be attached to the CCB to augment its thrust at liftoff; however none were used for Thursday’s launch.

The second stage is a Single Engine Centaur, powered by an RL10A-4-2 engine which burns liquid hydrogen and liquid oxygen.

Single and Dual-engine configurations are offered by ULA, however to date only the Single-Engine Centaur has flown on the Atlas V. Atop the Centaur sat the payload, encapsulated in a four-metre payload fairing. A Long Payload Fairing, the shortest of the three available for the Atlas V, was used on this flight.

The DMSP launch took just eighteen and a half minutes from liftoff to spacecraft separation, a short mission requiring just one burn of the Centaur’s RL10 engine. 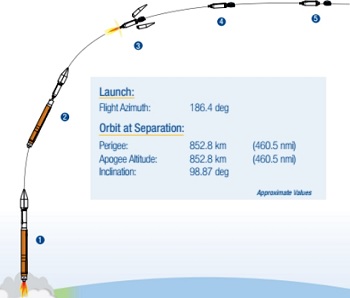 AV-044 ignited its RD-180 main engine 2.7 seconds ahead of its scheduled launch time, with liftoff occurring at T+1.1 seconds when the thrust being produced exceeded the vehicle’s weight.

Around 17.1 seconds after launch the vehicle pitched over and manoeuvred to attain an azimuth of 186.4 degrees, taking it to the south-southwest over the Pacific Ocean. Atlas passed through the area of maximum dynamic pressure 85.7 seconds after liftoff.

The Common Core Booster burned for the first four minutes and 4.6 seconds of flight, after which its engine was shut down. Ten seconds later the spent stage was jettisoned, with the Centaur’s engine igniting after a further ten seconds.

The Centaur’s burn will lasted 11 minutes and 18.8 seconds, taking its payload directly into its operational orbit. Eight seconds into second stage flight the payload fairing separated from around DMSP-5D3 F-19.

Spacecraft separation occurred 18 minutes and 28.4 seconds after launch, or two minutes and 49 seconds after the end of powered flight. The target is a circular sun-synchronous low Earth orbit at an altitude of 852.8 kilometres (529.9 miles, 460.5 nmi) and an inclination of 98.87 degrees.

Owing to a lack of Notices to Airmen regarding the Centaur being deorbited, it has been speculated that following spacecraft separation the upper stage will restart, making a burn to depart Earth for Heliocentric orbit. 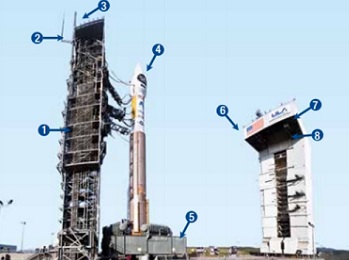 Thursday’s launch used Space Launch Complex 3E at the Vandenberg Air Force Base in California. Originally built for the US Navy as part of the Point Arguello launch site, Launch Complex 1-2 as it was originally named first supported a launch in 1961 when an Atlas-Agena deployed a MIDAS early warning satellite.

Throughout its history, SLC-3E has been used by Atlas rockets, with Atlas-Agena, Atlas SLV-3, Atlas-Burner, Atlas-E/F and Atlas H vehicles making use of it until the site became derelict in the late 1980s.

The complex was rebuilt for Atlas-Centaur launches during the mid 1990s, with the Atlas II making three flights from the complex. Following renovations to accommodate the Atlas V, the pad reopened with the March 2008 launch of USA-200 (NROL-28), and Thursday’s launch marks the eighth from the pad by an Atlas V.

The launch of AV-044 was America’s fifth orbital launch of 2014, the second for the Atlas V and third for United Launch Alliance.

The next Atlas V launch is scheduled to occur in a week’s time, pending the resolution of an issue with range tracking equipment, deploying the NROL-67 payload in a launch from Cape Canaveral.

According to ongoing L2 coverage, it is understood the next Atlas V was favorite to launch on April 10, now the Vandenberg Atlas V launched on the first attempt. A seven day spacing requirement between Atlas V launches would have likely remove the possibility of launching the NROL-67 mission on April 10 in the event of a delay to the DMSP-5D3 F-19 mission.

It has since been confirmed via L2 that the Atlas V with NROL-67 is now Range Approved for April 10 at Cape Canaveral, with a window of 1345-1426 local time.

That has since been confirmed, as outlined in this new article: http://www.nasaspaceflight.com/2014/04/range-realigns-spacex-crs-3-april/