A Russian Soyuz-U rocket was launched from Site 31/6 at the Baikonur Cosmodrome in Kazakhstan on Wednesday. In what is expected to the last “non Progress” launch of this variant of Soyuz, an Egyptian spacecraft – known as EgyptSat-2 – enjoyed a ride uphill on the Russian workhorse. Launch occurred on schedule at 16:20 UTC.

The Soyuz family of rockets are descendants of the R-7 Semyorka, the world’s first intercontinental ballistic missile. The R-7 was designed by Sergei Korolev, and first flew in 1957. A modified version was used to launch the first satellite, Sputnik 1, on 4 October of that year.

The R-7 formed the basis for the Luna, Vostok, Voskhod, Molniya and Soyuz families of rockets, and to date all Soviet and Russian manned space flights have been launched using rockets derived from the R-7.

The Soyuz-U that was used for this mission is the most-flown orbital launch system ever developed, having made over 750 flights to date, plus around 90 more in the Soyuz-U2 configuration optimised to use synthetic propellant.

Other variants of this family include the Soyuz-2, which was developed from the older Soyuz models, and features digital flight control systems and modernised engines.

In service today are the Soyuz-2-1a, and the Soyuz-2-1b – which features an RD-0124 third stage engine which provides additional thrust. The RD-0124 was declared operational on 3 May 2011. 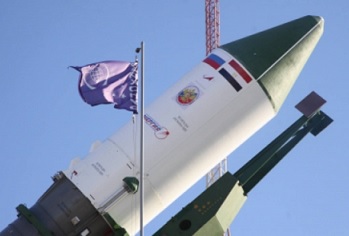 The Soyuz-U is best known for its launches of Progress resupply vehicles to the International Space Station (ISS).

It is believed the Soyuz-U that launched on Wednesday was the final use of the rocket for a non-Progress payload. It is expected the Soyuz-U will succeeded by the Soyuz 2-1V in 2015.

The EgyptSat-2 satellite – which has seen its launch delayed several times – was built by RKK Energia and is destined for an operational orbit of 435 x 435 miles with a 51.6 degrees declination to the equator.

The spacecraft follows on from the launch of EgyptSat-1, which was launched by a Dnepr rocket – a converted RS-20 intercontinental ballistic missile – in 2007. However, that satellite saw its life end in 2010, due to a failure of its S-Band communication system.

Weighing in at 1,050 kg, the Earth Observation satellite is being launched on behalf of Egypt’s National Authority for Remote Sensing and Space Sciences.

The bird is equipped with three deployable, fixed solar arrays and X-band communications. It is expected to have an operational lifetime of 11 years, covering Egypt’s mapping, environmental monitoring and disaster management requirements.