The iconic Vehicle Assembly Building (VAB) at the world famous Kennedy Space Center (KSC) may have fallen silent over recent years, but behind the scenes teams are working on a “roadmap of operations” for the giant building, ahead of its primary role with the integration of the Space Launch System (SLS) and Orion spacecraft.

The VAB has been the focal point for mating NASA launch vehicles since the days of the Saturn through to the 30 year career of the Space Shuttle. The building’s role has been secured for decades to come, providing the role for SLS integration with its payloads. 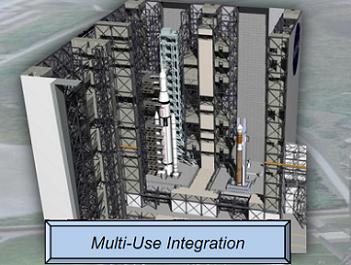 Its four main Bays are being re-purposed not only to host SLS, but also any potential commercial launch vehicle – per its multi-user ambitions. However, only SLS has been confirmed as specifically requiring the iconic facility at this time.

With oversight from the Ground Systems Development and Operations (GSDO) Program, the VAB is being slowly transformed into becoming a key part of the SLS and Orion flow, ultimately resulting in the rollout of the monster rocket to Pad 39B.

A recent Preliminary Design Review (PDR), provided an assessment of the initial designs for infrastructure at Kennedy and allowed development of the ground systems to proceed toward detailed design.

“The preliminary design review is incredibly important, as it must demonstrate the ground systems designs are on track to process and launch the SLS and the Orion from Kennedy,” noted Mike Bolger, GSDO program manager.

The result is a roadmap of the integration for the numerous elements of hardware that will make up the SLS/Orion stack prior to rollout.

The first step will involve the Mobile Launcher (ML), which is currently undergoing work to convert it from its initial – now defunct – role with the Constellation Program (CxP). The huge structure will roll into High Bay 3 of the VAB, via one of the Crawler Transporters (CT) – which are also undergoing modifications. 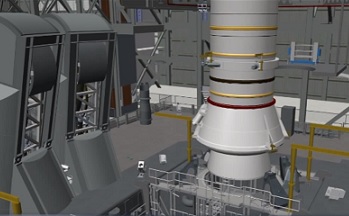 ATK-built Booster segments will then start to arrive from the Rotation, Processing and Surge Facility (RPSF) – from their Off-Line Booster Processing flow – rolled into the VAB’s Transfer Aisle where they will be hooked to a crane and carried over into High Bay 3 for integration with the ML’s zero deck.

Starting with the left booster, the segments will arrive one at a time for stacking on the ML.

Around this time, the largest element of hardware – the Core Stage – will arrive via Barge, following its construction at the Michoud Assembly Facility (MAF) in New Orleans and testing at the Stennis Space Center (SSC). 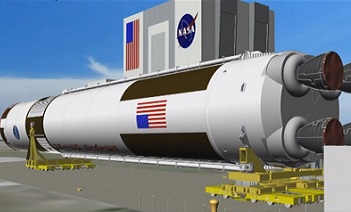 This arrival will be a similar sight to that observed during the shipping of the External Tanks during the Space Shuttle Program (SSP). However, the Core Stage will be a larger structure, complete with its four RS-25 engines already installed when it’s rolled off the Barge. 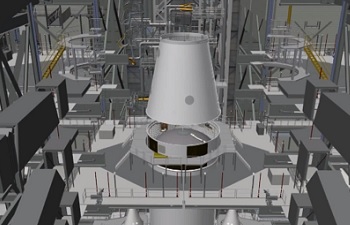 Lowered between the two boosters, this process will bring back memories of SSP flows, where the ET was transferred over and lowered for mating with the Solid Rocket Boosters.

The next element to make its way over from the Transfer Aisle will be the Launch Vehicle Stage Adaptor (LVSA), a key piece of hardware that allows for the Orion spacecraft – and its propulsion stage – to sit atop of the Core Stage.

The LVSA hardware will be the first ISPE element to be integrated to the stack, with a separation plane at the top of the LVSA – the mark between the first and second stages of the entire vehicle. 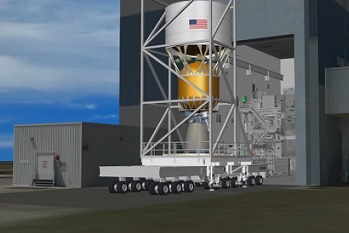 The next element will be the Interim Cryogenic Propulsion Stage (ICPS), currently set to be the Delta Cryogenic Second Stage (DCSS) for at least the first flight. The Stage will be prepared in the Multi-Purpose Processing Facility (MPPF) in the Operations & Checkout (O&C) building, via off-line processing, before being rolled out towards the VAB.

Lifted over from the Transfer Aisle to High Bay 3, the Stage will be mated atop of the LVSA.

The LVSA assembly and Core Stage mating flanges will be verified to meet flatness and cleanliness requirements, and the components are electrically grounded prior to installation on the Core. 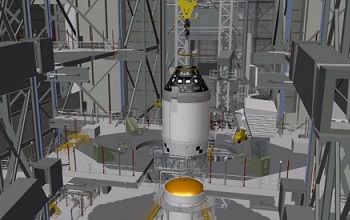 Next in line will be the Orion spacecraft – or any other payload that gets to ride on the SLS. For an Orion mission, the spacecraft will also enjoy a ride from the MPPF to the VAB’s Transfer Aisle. Once there it will be mated with its Stage Adaptor, before being lifted over to the stack in High Bay 3.

The Adaptor – or MSA – also serves as a spacer between the exit plane of the Orion SM engine nozzle and the forward end of the Propulsion Stage’s LH2 tank. This interface ring was the first actual element of hardware that was constructed for SLS, due to its requirement on the Exploration Flight Test -1 (EFT-1) vehicle.

Topping off the stack will be the Launch Abort System (LAS), built by ATK.

The LAS’ key role is to safely pull the Orion crew module away from the launch vehicle in the event of an emergency on the launch pad or during the initial ascent of an SLS mission. 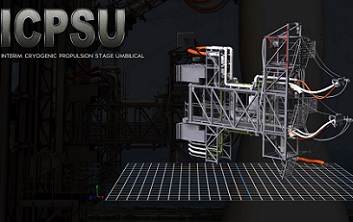 With the stack complete, the vehicle will undergo Integrated Vehicle Testing procedures, prior to the mating of the vast array of umbilical connections that will be hooked up between the ML and the vehicle.

The final processing milestone prior to rollout will involve Integrated Testing and Closeouts, including system checks inside the Orion spacecraft. This will ensure the Orion and SLS are successfully communicating between each other, as is required during the countdown and launch. 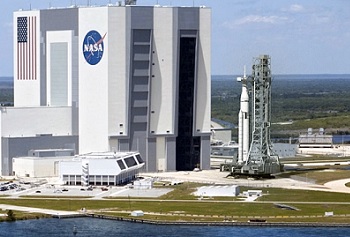 The giant platforms will then retract from around the vehicle, allowing for the CT to gently ease the stack out of the High Bay, beginning the first rollout to Pad 39B.

Once at the pad, more system checks will take place, ahead of the Launch Countdown Simulation, a milestone known as the Terminal Countdown Demonstration Test (TCDT) during SSP days.

However, unlike Shuttle, the stack will then rollback to the VAB to allow for ordnance installation and final closeouts. With SLS, this process cannot be conducted at the pad. 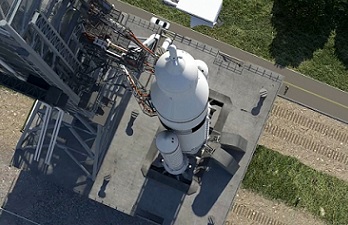 The second rollout will be for launch, with arrival at the pad marked by the loading of hypergolics on the vehicle.

The vehicle will then head into launch countdown operations.

“We’ve pushed the boundaries of space exploration for more than 50 years and are making progress getting ready to move the frontier even further into the solar system,” added Dan Dumbacher, deputy associate administrator for exploration system development at NASA Headquarters in Washington. ‘

‘The (VAB) work being done to transform our abilities to prepare and process spacecraft and launch vehicles at Kennedy is a critical piece of our efforts to send astronauts in Orion on top of the Space Launch System to an asteroid and ultimately Mars.”