Two NASA spacecraft are to join forces in finding a new deep space target ripe for investigation by the New Horizons spacecraft. The venerable Hubble Space Telescope (HST) will attempt to find the target – in the Kuiper Belt – for New Horizons to travel to, following its primary mission of investigating Pluto in 2015.

New Horizons was lofted uphill atop of an Atlas V rocket in 2006, sent directly into an Earth-and-solar-escape trajectory with an Earth-relative speed of 36,373 mph – setting a record for the highest velocity of a human-made object from Earth.

Racing out into deep space, the spacecraft enjoyed a brief encounter with the asteroid 132524 APL, prior to its approach of Jupiter in February, 2007. The Jupiter flyby provided a gravitational assist, increasing New Horizon’s velocity by another 9,000 mph.

With its sights then set on its primary target, Pluto, the spacecraft went into a deep slumber, before awakening for a system checkout in 2013, prior to returning to its hibernation mode.

In the summer of last year, New Horizons’ cameras were activated and aimed at its target destination. During this brief observational window, New Horizons return its first distinct images of both Pluto and its primary moon, or potential twin, Charon. 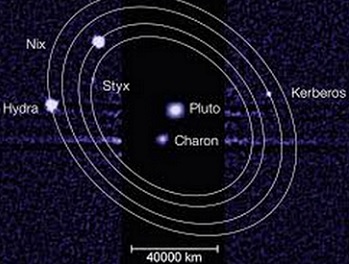 When New Horizons arrives at Pluto for closest approach on 14 July 2015, it will not only explore Pluto and its neighbors Charon, Nix, and Hydra, but also two newly named moons which were discovered in 2011 and 2012 via the Hubble Space Telescope.

The newly discovered moons were officially named by the International Astronomical Union on 2 July 2013. The IAU chose the names Kerberos (whose precovery images date to 2006) and Styx.

However, once the spacecraft departs the region, it may have another target to investigate, thanks to an agreement to use Hubble to search for candidate objects in the Kuiper Belt.

“After careful consideration and analysis, the Hubble Space Telescope Time Allocation Committee has recommended using Hubble to search for an object the Pluto-bound NASA New Horizons mission could visit after its flyby of Pluto in July 2015,” noted a NASA release on Monday. 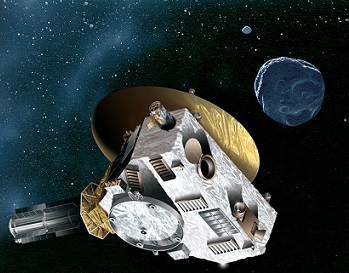 According to NASA, the planned search will involve targeting a small area of sky in search of a Kuiper Belt object (KBO) for the outbound spacecraft to visit.

The Kuiper Belt – a vast debris field of icy bodies – was formed from the solar system’s formation 4.6 billion years ago.

A KBO has never been seen up close because the belt is so far from the sun. New Horizons could now be set to change that.

Hubble will scan an area of sky in the direction of the constellation Sagittarius to try and identify any objects orbiting within the Kuiper Belt, NASA added.

“I am pleased that our science peer-review process arrived at a consensus as to how to effectively use Hubble’s unique capabilities to support the science goals of the New Horizons mission,” said Matt Mountain, director of the Space Telescope Science Institute (STScI) in Baltimore, Maryland. 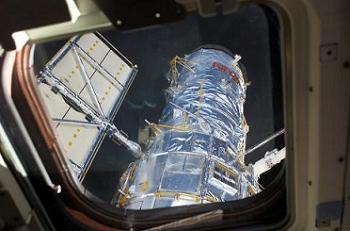 However, finding a candidate for New Horizons will be difficult. A typical KBO along the spacecraft’s trajectory may be “no larger than Manhattan Island and as black as charcoal.”

If the test observation identifies at least two KBOs of a specified brightness it will demonstrate statistically that Hubble has a chance of finding an appropriate KBO for New Horizons to visit.

“The planned search for a suitable target for New Horizons further demonstrates how Hubble is effectively being used to support humankind’s initial reconnaissance of the solar system,” Mr. Mountain added.

“Likewise, it is also a preview of how the powerful capabilities of the upcoming James Webb Space Telescope will further bolster planetary science. We are excited by the potential of both observatories for ongoing solar system exploration and discovery.”

(Images via NASA and L2 Historical).